Understanding the meaning and evolution of the Mazda Logo

The Mazda logo is one of the most recognizable in the world, but its evolution towards its current form highlights the company’s rich history. Mazda was founded in 1920 as the Toyo Cork Kogyo Company and originally produced heavy machinery and tools. Strangely, although its vehicles bore the Mazda brand from when it started producing them in 1934, the company only formally assumed the Mazda name in 1984.

The first appearance of the Mazda logo was when it started producing three-wheel trucks. The name came from the god of light Ahura Mazda and was adopted in the hope that it would lighten the image of the compact vehicles the company was producing. In addition, Mazda claims the name was also inspired by its founder’s name, Jujiro Matsuda. The logo was basically a stylized rendering of the brand name.

In 1936, the company introduced a brand symbol to go along with the logo. It consisted of three stylized “M”s and was inspired by the emblem of the company’s hometown, Hiroshima. The three “M”s were designed to resemble wings symbolizing the company’s ambition to ascend to new heights. The M’s themselves meant “Mazda Motor Manufacturer”. 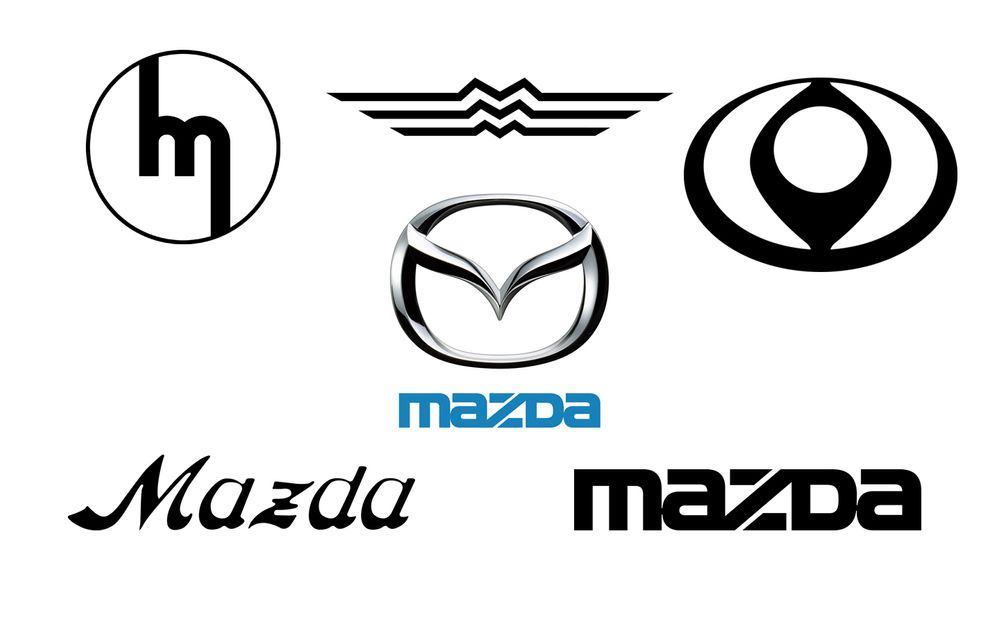 In 1959, Mazda introduced a new brand symbol, which consisted of a stylized “M” in a circle and was used when it first started producing passenger cars. It first appeared with the R360 coupe, which also introduced some of the company’s cutting-edge technology.

In 1975, following a revamp of its corporate identity, Mazda introduced the now-familiar logo that has been the base of its visual identity to the present. A new brand symbol followed in 1991, which consisted of a diamond-like shape in an oval and is called the “cylon” logo by fans. This was intended to symbolize a circle of light surrounding the sun and wings. This symbol was refined in the following year by rounding out the diamond’s edges and making the oval into more of a circle. These changes were intended to lessen its resemblance to the Renault symbol, and enthusiasts dubbed it the “eternal flame” symbol.

The current brand symbol was introduced in 1997. It features a stylized “M” designed to look like wings that signify its flight towards the future.  The “M” spreads out in a wide angle that symbolizes the company’s flexibility, creativity, passion and vitality. It is surrounded by a “dynamic circle” that highlights Mazda’s readiness to enter the new century (the logo was introduced in 1998) with its wings spread. The logo symbolizes the solid and sharp feeling that Mazda is aiming to achieve with all its products.\

Along with the symbol, the company introduced the “Zoom-Zoom” tagline in 2000. The tagline was intended to highlight how pleasurable driving could be. Mazda’s visual brand identity was tweaked slightly in 2008. Although all three elements (the Mazda logo, the “wings” symbol and the tagline) were included unchanged, the “Zoom-Zoom” line was placed at an angle to suggest movement as well as the bold nature of the company itself.

The pros and cons of self driving cars

The Biggest Groups in the Automotive Industry