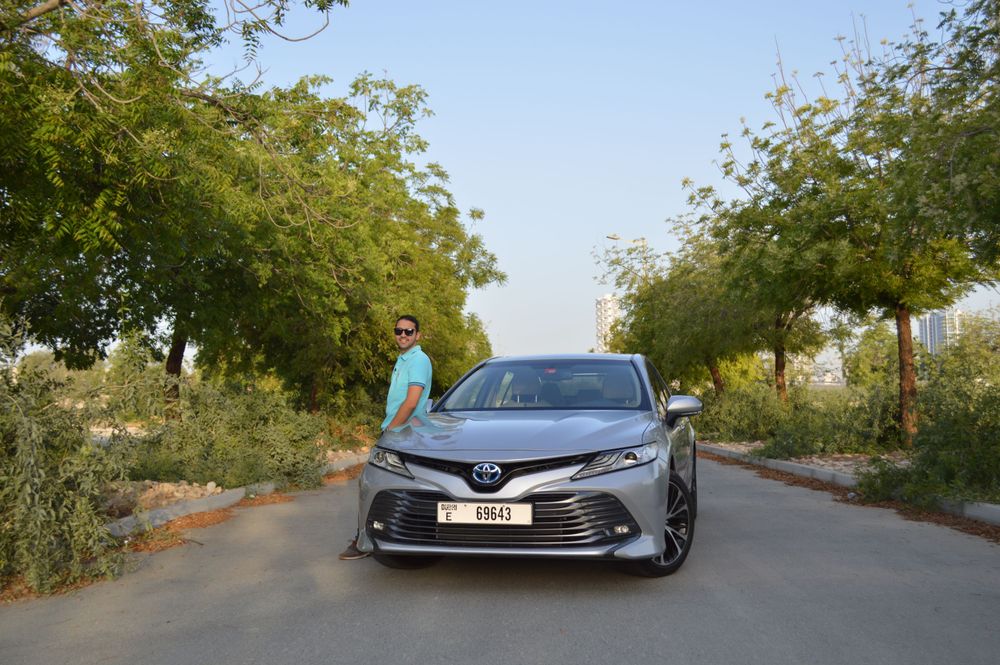 Now before moving forward, I’d like to start this review by clearing up some misconceptions. Here in the UAE, the Camry has earned a bad name for being a ‘taxi’ but let me tell you what that really means. Taxis are run between 18 to 20 hours a day, day after day and week after week for years on end. Meaning, they need to be extremely reliable, and should they break down, they need be easy and affordable to fix.

The fact that so many taxi companies across the country rely on Camrys, proves that they are reliable and extremely affordable to run. So, the next time you try dissuading a friend, colleague, acquaintance or family member from purchasing a Camry because it’s a ‘taxi’, stop and think twice; you might have just paid it a huge compliment. 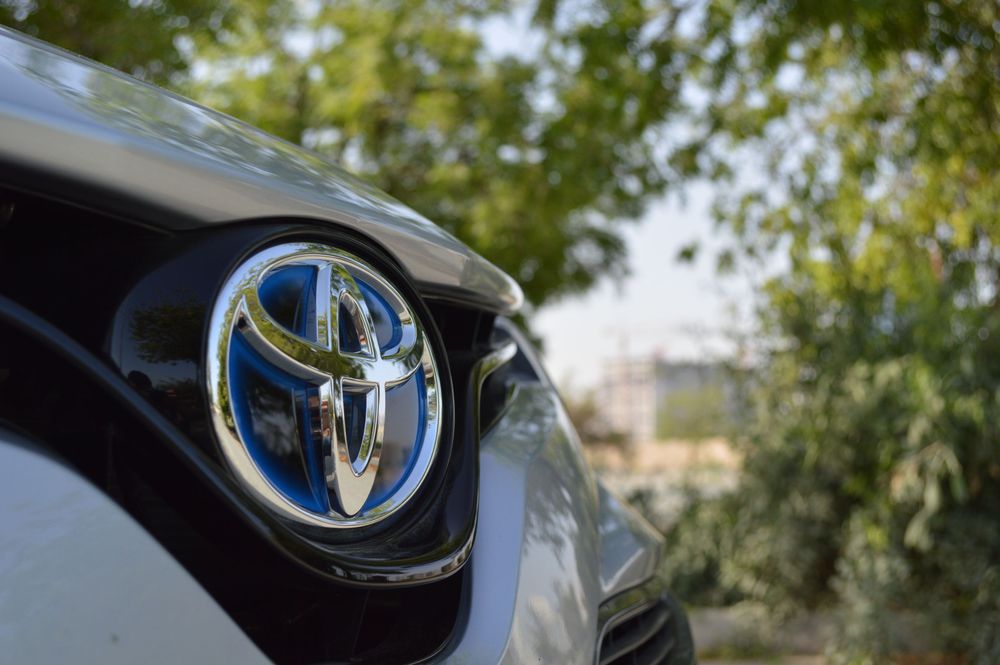 With that little rant out of the way, let’s look at the design. Now there aren’t any drastic changes between the Hybrid and the standard Camry. It still looks very sporty with a big slatted grille and gets LED headlights and a nice set of 18-inch wheels. The subtle changes are the blue coloring in the logos, blue coloring on the door trims, and Hybrid badges on the fenders and boot lid that make it different. 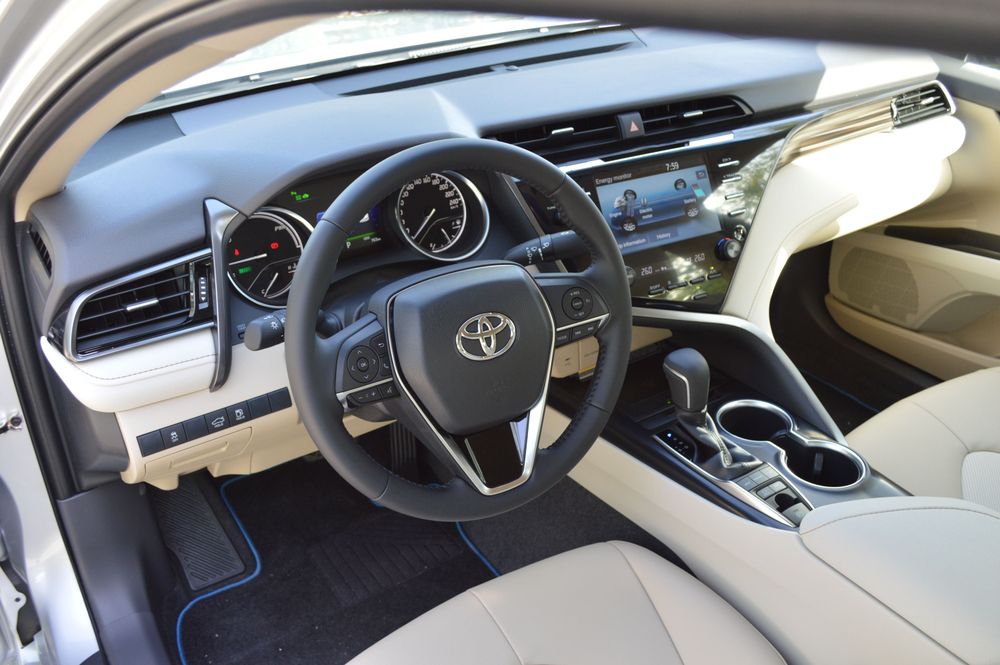 On the inside, the Camry Hybrid gets the same great design found in the standard car. The swooping dashboard and center console design gives the impression of a driver focused cabin and integrates all the buttons and controls very neatly. For instance, the 8-inch infotainment screen found in this car, forms part of the design itself and isn’t jutting out of the dashboard as we’ve seen in many newer cars including its competitors.

Despite not offering as much space as the Honda Accord, the backseats of the Camry Hybrid are very comfortable. There are rear A/C vents, cupholders, and with the batteries being relocated from the boot to under the rear seat, boot space has increased to an impressive 428 liters – a big jump from the 371 liters in the previous model. 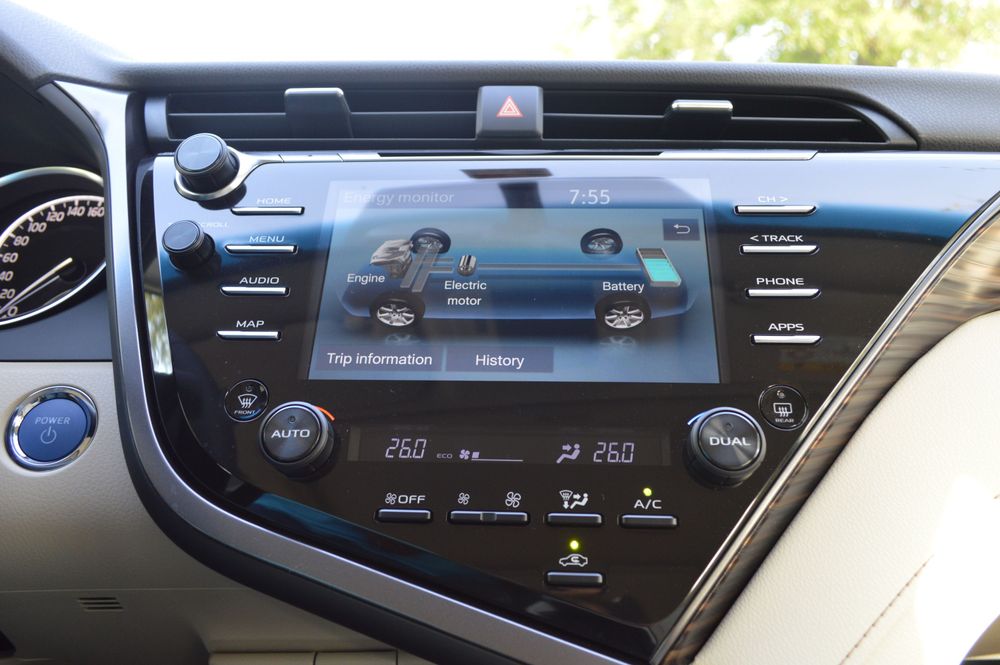 Equipment wise, the Camry Hybrid fares moderately well. It’s got a nice wireless charging tray that folds away when not in use, a dual zone air-conditioning system, push button start, a sunroof, power sunshade, and a rear camera, which isn’t bad at all. It’s just that if you were to compare it to any of its other rivals, you’d notice it’s missing things such as Android Auto and Apple CarPlay, Adaptive Cruise Control and Blind Spot Monitoring, to name a few. 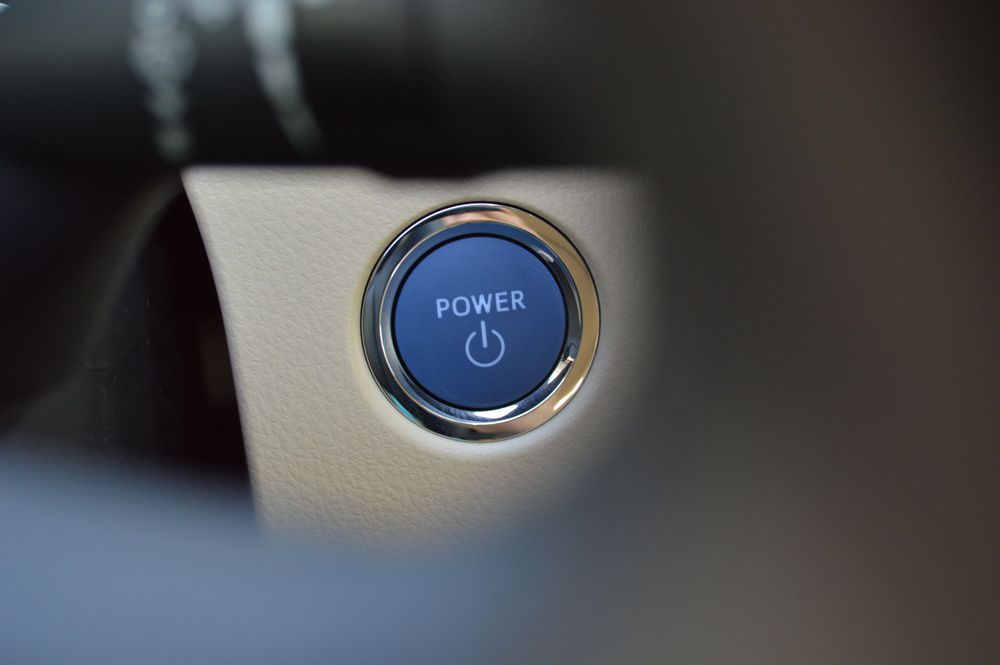 Now with all ancillary stuff out of the way, let’s talk about how it drives! This being the Hybrid model, gets a 2.5-liter petrol engine under the hood and an electric motor too. What’s instantly noticeable is that it’s quieter and smoother than the standard car, and that’s because most of the time the car is using the battery and electric motor, meaning the engine is completely switched off.

Compared to the standard petrol-powered Camry, there are three main differences with the Hybrid model. Firstly, it’s more powerful and that’s because the electric motor provides 37 more horsepower, taking total output to 215 horsepower. Secondly, it has a smaller fuel tank at 50-liters, compared to 60-liters in the standard car. And finally, the Hybrid gets a CVT transmission which helps it save fuel as opposed to a 6-speed automatic in the standard car. 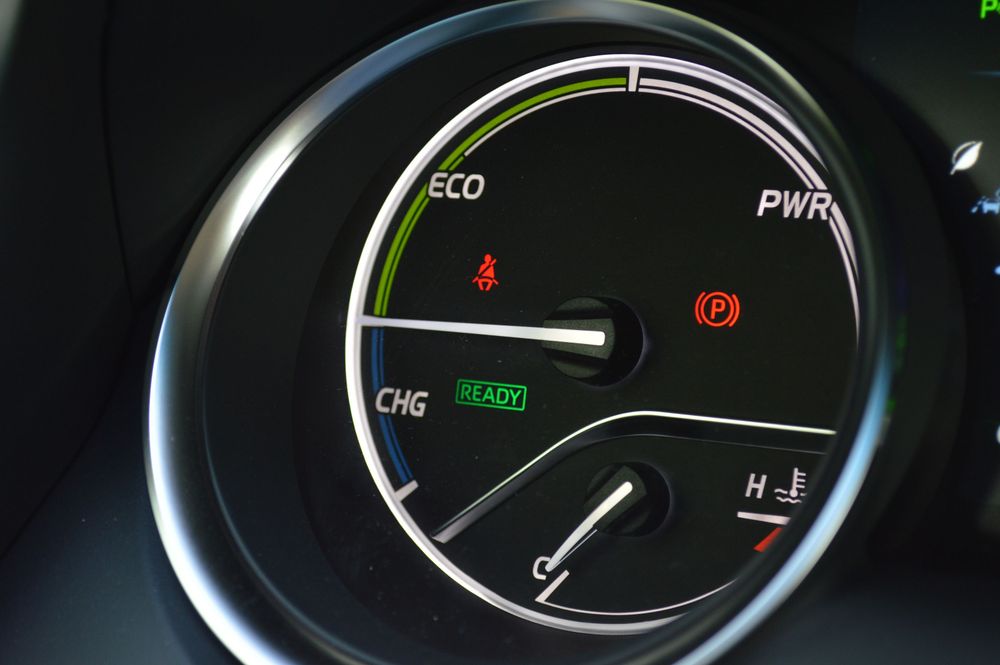 Speaking of saving fuel, I’d like to highlight that the Camry Hybrid runs on regular petrol and doesn’t require any special type of fuel or anything. I’m just clarifying this because I recently had someone ask me that very question. You fill it up at the petrol station and drive, just like you would with any other car. The only difference you’ll notice is just how fuel efficient it really is.

To give you a better understanding of what I’m talking about, the Camry Hybrid claims to do 26 km/l, and while that’s a figure you could possibly achieve in ideal conditions, you’re likely to average 20km/l in the real world. Think about it this way, if you’re like me and you do approx. 60km per day to the office and back home, all you’d need is 3-liters of petrol to cover that distance! It’s mind-blowing. 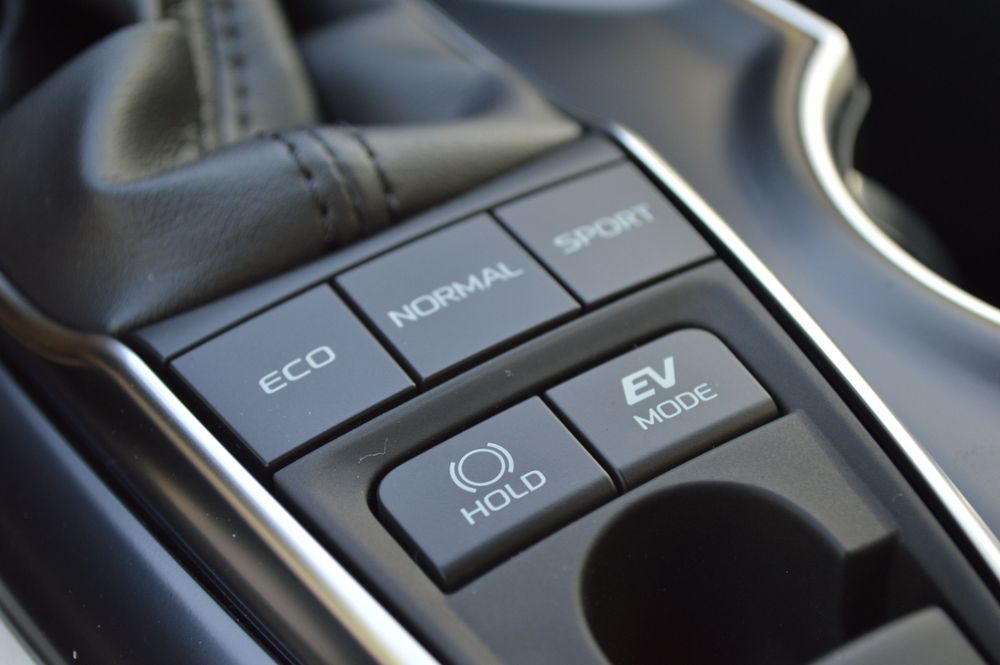 Just like in the standard Camry, there are three drive modes: Eco, Normal, and Sport, but the addition in the Hybrid model is an EV mode. Although you can drive the car on battery power alone with the engine switched off, there’s no cable or plugging the car in to charge it up. Instead, it charges while you drive, when coasting or braking and you can see that on a dedicated gauge in the instrument cluster. 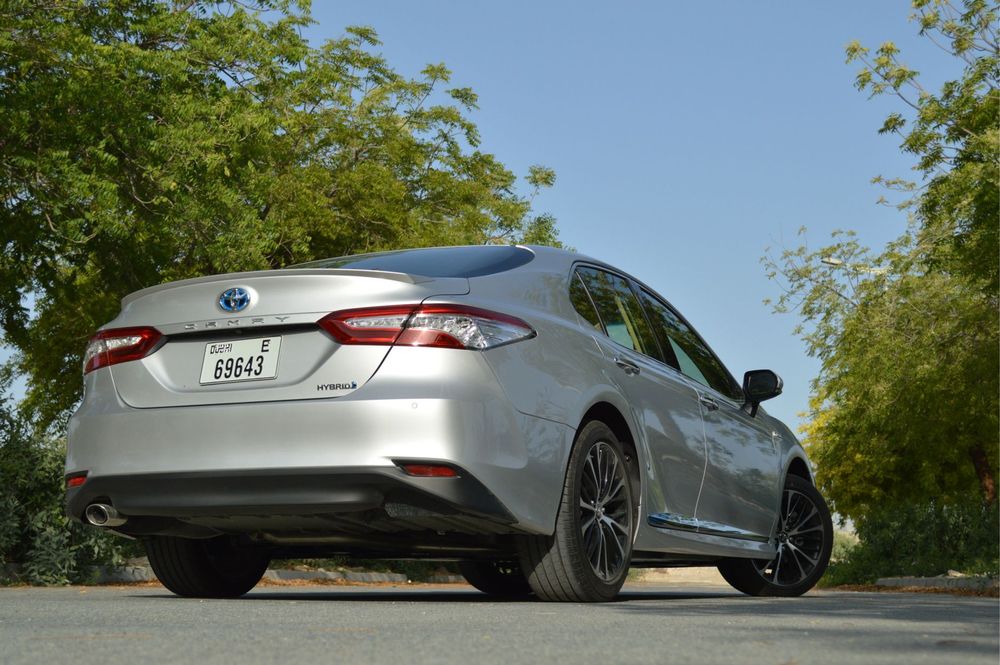 The Toyota Camry Hybrid, it looks good, it’s extremely fuel efficient and I personally like it very, very much but just like with every other car out there there’s pros and there’s cons. Let me start by talking about the pros. Firstly, since neither the Accord, Altima, nor Mazda6 offer hybrid variants (or at least in the UAE) you can say that the Camry Hybrid sits in a class of its own. Secondly, and this is a really important point, Toyota offers an 8-year unlimited kilometer warranty on the battery and this is sure to give potential buyers plenty of peace of mind. Thirdly, and if you’re worried about servicing costs, you’ll be happy to learn that Al Futtaim Toyota charges the same amount for servicing a hybrid Camry as they would for a standard petrol model.

But let’s keep the pros aside and talk about the con, there’s just one but it’s a very big one…the price. This full-option Camry Hybrid costs a jaw-dropping 33,600 Dirhams more than the regular 2.5-liter full option model and that’s flatly unacceptable. In fact, if you did the math, you’d realize that you needed to drive the Hybrid model for more than 318,000 kilometers before you even got close to breaking even. So, will buying the Hybrid really save you money? It doesn’t seem so, not unless you plan on covering more than 318,000 kilometers…