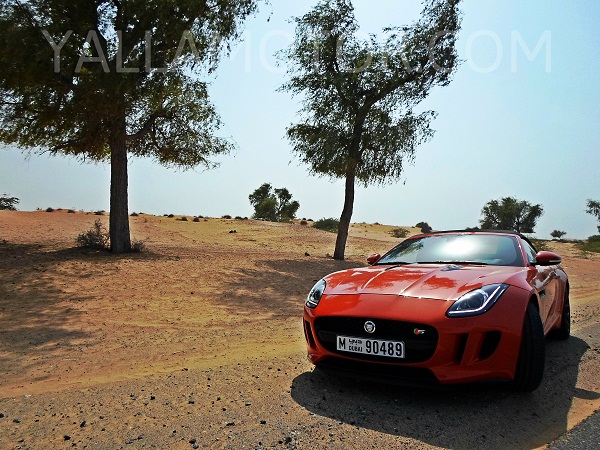 It isn’t every weekend that I get to experience a lifestyle of the rich and famous. However, with a particular sports car at my disposal, this weekend surely seemed to be one of them. It was time to drive as much as I could; discovering places I hadn’t seen and speeds I hadn’t reached.

I picked up the keys and it wasn’t long before I found myself sitting in the driver’s seat of a 2013 Jaguar F-Type. It was a convertible, finished in a beautiful Firesand orange hue and wore 19” Tornado black alloys. 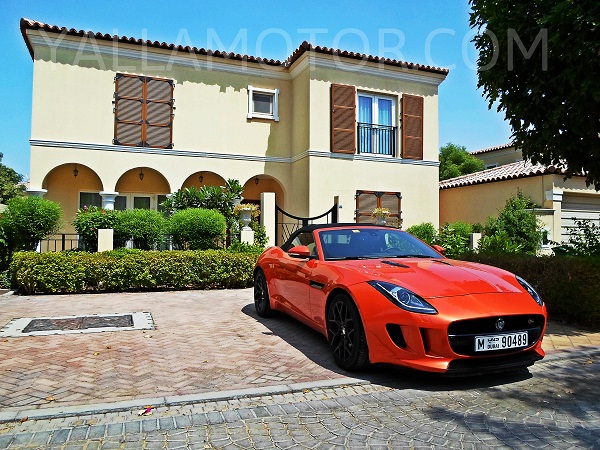 Up front, the sculpted hood flaunted black air vents while the headlamps were surrounded by Jaguar’s signature LED lights. As I walked along the car admiring its curves, I noticed the aerodynamic door handles that are similar to the type you’d come across on a Nissan GTR or a Mercedes SLS AMG. Get to the rear and the massive centre mounted exhausts along with the retractable spoiler are the first things I noticed.

What made this 4470mm long and 1923mm wide eye candy even more special was that the entire body was constructed from aluminum using a range of advanced techniques derived from the aerospace industry. Epoxy bonding and riveting contribute to the light, strong and rigid body structure. 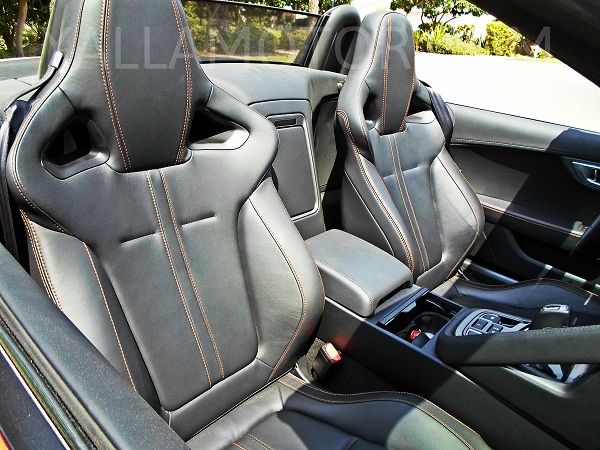 Open the door and you're likely to be taken aback by the height of the seating position. Though many people who sat in the car found it claustrophobic with the roof up, I personally loved the snug fit and felt like a pearl in an oyster. The black leather performance bucket seats with orange stitching are extremely supportive and offer automatic height and recline adjustment making sure you have the best driving position possible. 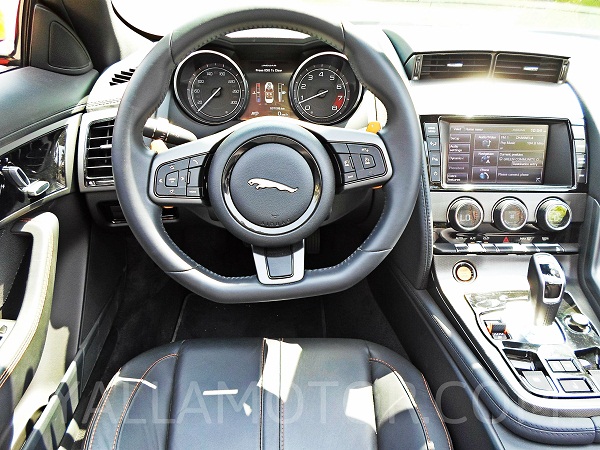 In terms of layout, the dashboard and centre console are extremely simple and uncluttered. Towards the top there is an Intelligent Venting System. Essentially what this does is when the A/C is switched on, two vents slide up from the dashboard and vice versa when the A/C is switched off. In the middle of the centre console there resides a decent 8" touch screen infotainment system which can also be used to view G-forces, acceleration and braking graphs, as well as a stopwatch to clock your sprints.

I was pleasantly surprised when I discovered what an ice storm the air-conditioning system on our F-Type was capable of putting out. Although it was about 40 degrees outside, with the A/C cranked up to just 2 points, it was more than comfortable and even got a little chilly in the cabin. Looks like the hot weather testing carried out in Death Valley California did pay off!

Our test car was also equipped with a 10 speaker Meridian sound system that was capable of playing music through Bluetooth, USB or an AUX cable. However, no matter how much I tweaked with the settings I was unable to make it sound any good. So I gave up and grinned away as my right foot took on the role of Beethoven and filled my ears with an array of exhaust notes.

An adaptive front lighting system was also present on our test car. This system was capable of swiveling the headlamps by 14 degrees outward and 7 degrees inward to better illuminate the path the driver intended to go on. 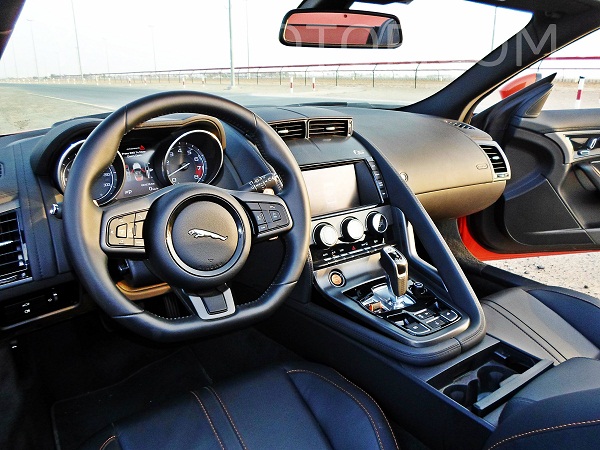 In terms of safety, the F-Type packs in Emergency Brake Assist (EBA), Electronic Brake-Force Distribution (EBD), driver and passenger front airbags, seat mounted airbags with head protection, seat belt pre-tensioners, roll over bars, blind spot monitoring, a reverse camera and a Pedestrian Contact Sensing System. In its simplest form, the Pedestrian Contact Sensing System automatically deploys the bonnet and can help protect those outside the car. The system is designed to raise the bonnet slightly if it detects contact with a pedestrian in order to help prevent their head from connecting with hard points under the bonnet.

Though the interior of the F-Type was a premium and comfortable place to be in, it did pack in a few unpleasant surprises as well. For starters, the Bluetooth system was probably the most complicated I have ever encountered and it insisted on automatically increasing and decreasing the volume when streaming music.

Secondly, the stopwatch doesn't automatically calculate your sprint times like in a SRT but instead the driver has to start and stop it manually. So ideally, a driver would need 3 hands and 3 eyes to use this stopwatch effectively. One hand on the steering, one hand on the gear lever and one hand to start and stop the timer. While simultaneously keeping one eye on the road ahead, one eye on the speed-o-meter and one eye on the stop button. As you can see, it isn't very practical.

Finally, the boot. If I were to describe it in one word, I'd call it a joke. Although the official readings claim it can pack in nearly 200 liters, you'd have a tough time fitting in more than a couple of backpacks. 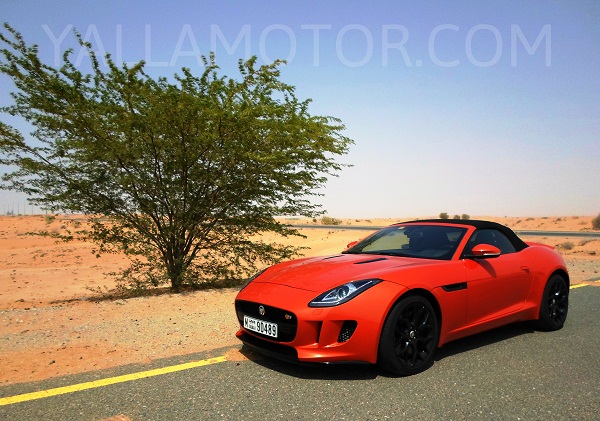 In terms of drive, our F-Type S packed in a 3.0 liter V6 supercharged engine under the hood. This meant it was good for 380 horsepower and 460 Nm of torque. Switch the sport exhaust on and while the F-type makes its way to 100 km/h in just 4.9 seconds and continues all the way to a ground shaking 275 km/h, let your ears and your passerby’s ears be filled with a symphony of exhaust notes. The roots type twin vortex supercharger offered instant access to high levels of torque at all engine speeds minimizing the gap between my need for power and the engines response.

The 8 speed Quickshift transmission is extremely intelligent to say the least. When set in Auto, it continuously monitors the driving situation and responds accordingly. Fast Throttle-Off recognizes when the driver is making rapid throttle adjustments, for example during multiple maneuvers and automatically holds the gear ratio in anticipation of the next move. Corner Recognition senses when the car is in a corner and holds the ratio ensuring the car is in the correct gear when exiting a bend. When decelerating and changing down, the Speed Matching Management System matches the engine speed to the gearbox speed, and automatically ‘blips’ the throttle during downshifts when in Sport Automatic mode, while Spontaneous Vehicle Deceleration enables the F-TYPE to rapidly downshift under very hard braking conditions. However, I’ll admit I spent majority of my time taking full control and driving in manual mode. Apart from being tons more fun, the Quickshift system delivers rapid and precisely timed engine torque interventions, creating shorter and crisper sounding gear shifts. As far as driving modes are concerned, the F-Type offers a Normal, Snow and Dynamic mode. When Dynamic mode is selected, there are significant improvements in steering weighting, throttle response and much quicker gear shifts. There is also an individual mode where drivers can select each component individually. So having the suspension set on Comfort, while having the gear shifts set on Dynamic is also possible.

On the F-TYPE S and the F-TYPE V8 S models, Adaptive Damping assesses body motion and pitch rates 100 times per second and adjusts the settings for each damper accordingly. The steering wheel position is measured 500 times per second enabling the system to predict the body’s roll rate. The stiffness of each individual damper is then adjusted to help maintain body control, stability and agility. To further improve handling by achieving an ideal weight distribution, the battery, electronic systems and wiper washer bottle are all in the rear!

Although the F-Type V6 S is capable of reaching a top speed of 275 km/h, with Jaguar’s high performance 380mm front and 325mm rear ventilated brake discs, along with the Pirelli P Zero tires our test car came fitted with, stopping was never an issue. As standard, Jaguar offers black brake calipers on the F-Type however these can be switched for the optional and much better looking red.

Quite simply then, the Jaguar F-Type V6 S provided me with more than enough kicks to keep me entertained all weekend. Although it suffered a drinking problem and was addicted to Octane 98, I gladly filled it up twice in 3 days! The only thing I needed to get sorted out now was getting hold of AED 329,000 so I could have one parked right up my drive way.