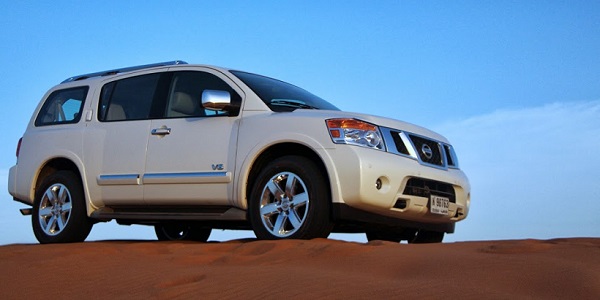 2013 Nissan Armada is the same as last year’s one, but the test we put it to is different. How did it fare? Well, let's find out!

The 2013 Armada stands tall with the high bumpers and has decent, at best, approach, ramp-over and departure angles for a stock vehicle, thanks to an all wheel independent suspension. The interior is nice and gives the driver a feeling of being a pilot instead. The dashboard and center console layout is quite user friendly and is not difficult to use, especially the Navigation. The fit and finish is good with no squeaks and rattles. The audio system, however, sounds like a boom-box at best. We were far from impressed.

The Armada comes with only one engine, a 5.6-liter V8 delivering 320 horsepower but has quite a bit of turning power available at low rpms. The transmission is five-speed automatic and comes with 2H, 4A, 4H & 4L modes on the transfer case and selectable traction control switch but has no rear or front locking differential.

In our on road testing we were able to do 0-100 kmph in just about 9 seconds and up to 140 kmph in 14 seconds, average for a full-size SUV and the maximum speed it allows to be driven is 180kmph via an electronic cutoff. We were able to get an average fuel economy of about 4kms/ Lt in city (with un-aggressive driving) and about 9kms/ Lt on highway with average speeds of 90 kmph and an overall average of 4.5-5kms/Lt combined. As in most off road conditions the fuel consumption almost doubles but averages pretty nice. The Armada was able to brake from 120-0 kmph in about 4 seconds.

The V8 can’t really be heard a lot inside. It is responsive and reaches the high notes quickly and urges you to rev it higher, but is quiet on cursing speeds. Overall the drive is pleasant but bouncy. The steering gives a decent feedback but one does feel the weight and size of the vehicle. The gear changes are fast but a little jerky on quick acceleration at times.

One can, however, continuously feel a slight pitching motion and soft rebounds from the suspension when one goes over bumps. Nothing harsh though. Once one gets off the road the suspension has to be kept in mind for bouncing back, but again, it’s a sea ship like movement on big waves!! Maybe that’s why the name is Armada. However one could almost not be worried about the clearances except cross-over due to the longest wheel-base in its class. Also helping off road is the increased ground clearance due to an all-independent suspension (which allows the differentials to be mounted closer to the body). It adds to the Armada’s off-road capability due a bit longer travel, making for easier extrication from large holes and better traction over the crests of sand dunes.

The traction control and stability control can be switched off completely via the provided switch.

The Armada has very low wind noise and tyre noise insulation is apparent. This makes the interiors a quiet place to be in. 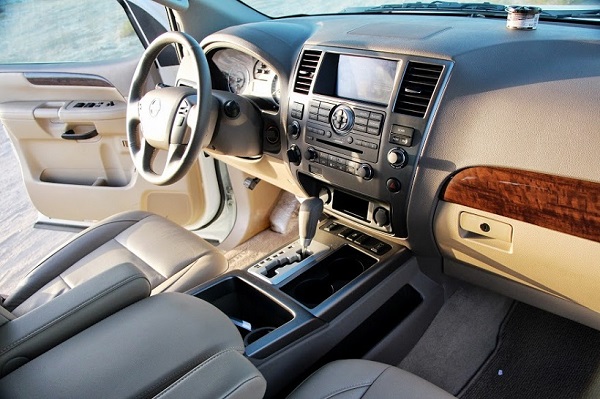 The seats are comfortable and the leather used is pretty decent. There’s plenty of room all round. There are 14 cup holders and lots of storage overhead and around the occupants.

The front seats are quite broad and comfortable. Second row seating is a great strength of the Armada’s interior and makes for limousine-like rear legroom even with the front seats pushed back all the way. The third row can accommodate adults on short trips. The cargo area that remains with the third row upright is just about ok and not so much compared to certain competition.

The A/C is a tri-zone system along with the AV system, however, there isn’t an option of cooled seats in any trim, which are a must have with the leather option. With the pedal adjustment and seat and steering adjustments, anyone is sure to find a comfortable driving position.

The sound system is not impressive at all. The video from the front center display cannot be played on the rear dual headrest displays at anytime. However they can play video from each other but the audio from the rear players is available only via respective headsets.

Starting at the base price of AED.165,000 for the SE, the Armada is not cheap. The other trims being the LE starting at AED. 179,500. Overall a very comfortable drive both on and off the road, strong contender in the full size dune basher category.