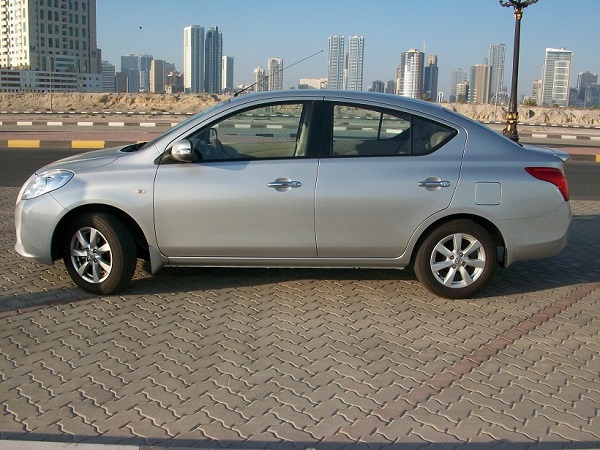 Ironically, it was quite a bright sunny day here in Dubai when I picked up the all new 2013 Nissan Sunny! The car was fresh out of the box; had no more than 147kms on the clock, and best of all, it was the top spec model.

What differentiates it from the basic model is; a subtle rear spoiler, two rear sensors (not 4), 15" inch alloy wheels, upgraded gauges and cloth seats, stereo steering wheel controls, Bluetooth phone connection, fog lights, power mirrors and windows, chrome grille surround and door handles, mirror indicators, mud guards, and finally, rear vents which are not connected to the AC unit but do help circulate the air in the cabin. 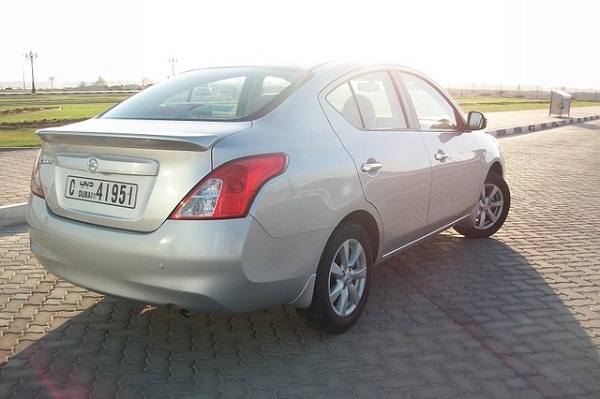 The engine is a 1.5 litre petrol unit pushing out just one horse power shy of a 100 horses and 134Nm of torque. I admired how economical this car was, especially with today's rising petrol prices. Additionally, I liked the onboard computer which displayed current and average fuel consumption while driving. I liked this feature seeing that most people will feel good about how economical this car is and therefore be happy with the decision they have made! But how fast does it accelerate? With only 99 horsepower, the fastest I could get this car to reach 100km/hour was a painful quarter of a minute - 15 seconds. Its Korean rival, the Hyundai Accent achieves the same speed almost four seconds faster.

As a result, I found myself having to really thrash the engine in order to overtake someone. The engine revs to 6500RPM, but sounds very unpleasant. Eventually, when I got to the allowed speed limit of 140km/hr on E311 road after god knows how long, I was surprised the Sunny felt pretty stable and even though some road and wind noise did filter into the cabin, it was relatively quiet and comfortable. Although, I had to be very careful knowing that this car has drum brakes on the rear wheels. Yes, drum brakes. Braking power was very week and you have to really push hard on the brakes to feel any braking effect.

The Sunny is definitely one of the easiest cars to drive that I have ever tested. I got used to its size and dimensions in about less than a minute of driving. No joke. The steering wheel is electronically assisted, which makes it feel nimble and light. However, not precise. The Sunny's steering wheel is best suited for driving around city, however, as I got on the highway and cruised at higher speeds, I felt the need for heavier action and definitely more feedback, which are very minimal in the Sunny. The car feels heavy on corners with significant body roll. 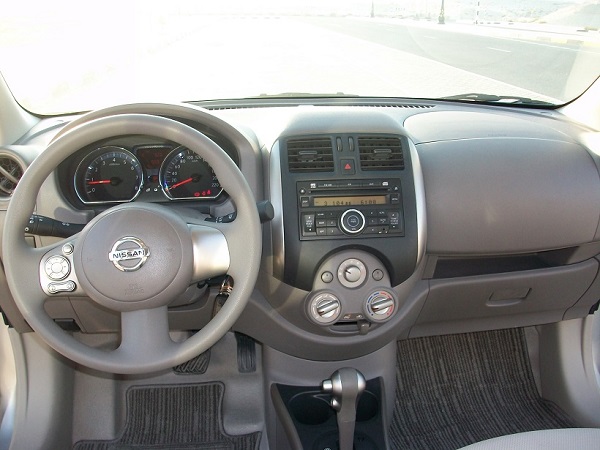 The minute I stepped foot inside the car, the first thing I noticed was how roomy the cabin was. I'm 5' 9" and it was not a hassle to find a perfect seating position for myself, as both the driver seat and the steering wheel had plenty of room for adjustments. The Sunny was built on the Micra platform, but instead was made with a longer wheelbase to be able to accompany five passengers quite comfortably and to add the rear boot which provides a useful staggering 490 litres of boot space, which is huge even when compared to the Yaris. It gets even better for the passengers at the back, as the head and leg rooms are rather very generous. I also found the armrest with the two cup holders at the rear passenger seat to be a nice touch from Nissan. There's more practicality throughout the cabin with two cup holders in the centre console, and others in the side door bin, as well as a large glove box. What I liked most about the Sunny is the amazing front and rear visibility, with huge windows on all sides of the car and small window pillars that make it the perfect car for city driving. 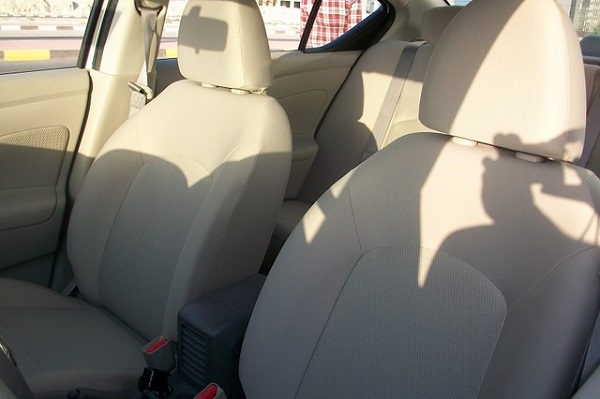 While the interior of the car is clearly built to last and the control buttons are logically laid out, the cabin is quite dull and everything feels superbly cheap with hard cabin plastic everywhere, especially when it comes to the AC controls which seem to have been pulled out of a 1995 Toyota pickup truck! Also, the fact that this car's horn sounds absolutely hideous, makes me doubt the Sunny will get much respect on the roads of UAE when honked. The stereo system, aside from sounding bad, is extremely basic and easy to use with the added functionality of a CD player, MP3, FM/AM radio and AUX plug, but USB is truly missed.

To put it all in a nutshell for you, starting at 45,500 AED, the Sunny really is not for hustling around, but more for leisurely travel. It is light and easy in the city, extremely spacious, and of course, being a Nissan, it is very reliable, cheap to run, and cheap to buy. Yet, perhaps you would want to explore its better looking Japanese and Korean rivals before making a final decision.