There’s no thrill sans sporty and aggressive machines in action movies or whodunit series as these mean and unabashed machines work like condiments and add the spice to movies. It becomes imperative to choose the best of the finest cars available in the world especially when a new movie is preparing to become part of an esteemed franchise. We’re talking about the James Bond series here and its upcoming film, No Time to Die. The euphoria is unparalleled with aficionados looking forward to yammer at the cinemas. When such is the anticipation, the makers of the film had to deliver and they have done it in style, using the Range Rover Sport SVR as their all-rounder vehicle that can propel like a javelin throw.

A behind-the-scenes video showing the surreal stunt and the way it has been performed demonstrating the captivating wonders film-making has made possible these days has been doing rounds on the internet and has stirred some serious brouhaha.

In the video, the car is seen trundling on rutted paths and flinging in the air in a canted position to depict the extremes the car is capable of performing. While that might seem vanilla to some, the fact that all this was performed at an intensely rapid pace is what leaves everyone befuddled.

Such activities can only be made possible through meticulous guidance of a highly skilled professional. For this purpose, Oscar®-winning special effects and action vehicles supervisor Chris Corbould was appointed who received the assistance of stunt coordinator Lee Morrison. 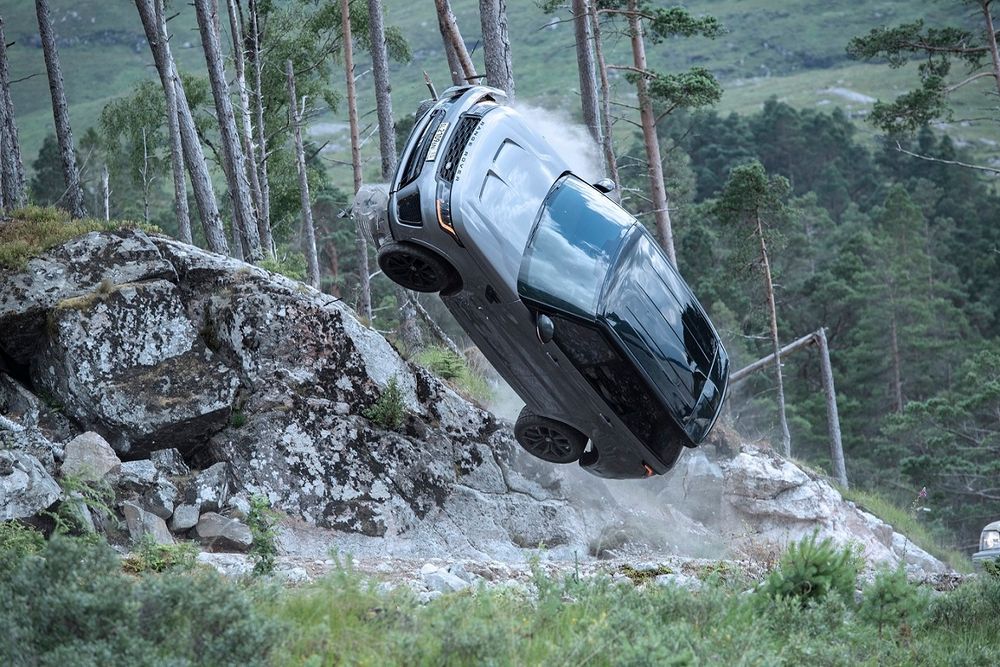 The latter commented: “I was really keen to shoot a Bond chase sequence off-road, in a really challenging environment and the Range Rover Sport SVR was the perfect choice for this part of the story. We shoot everything for real so we’ve pushed it to the absolute maximum and the pursuit promises to be one of the memorable set-piece moments of the film.”

While there are several super-SUVs in the market such as the Audi RS Q8, Lamborghini Urus and the Aston Martin DBX, what made the Range Rover Sport SVR special is its exceptional 5.0-litre supercharged V8 engine which churns out a whopping 575 PS that darts it from nought to 100 Km/h in 4.5 seconds (0-60 mph in 4.3 seconds) and goes slashing the wind till it attains its final leap of 283 Km/h which tags it as the fastest Land Rover ever.

In order to befit the requirements of the demanding environment, the car was progressively worked upon through which its suspension was tuned by the dexterous folks at Land Rover’s Special Vehicle Operations (SVO) department. This ensured better balance and nimble dynamics while keeping its core strength of providing fantastic comfort at the same time.

The haute-couture for Eiger grey models is Narvik Black 22-inch alloys and a lightweight carbon pack which can be added. It gets Gloss carbon-fibre front fender vents, lower bumper intakes, grille and mirrors. In the movie, the optional lightweight SVR Carbon fibre vented hood can be seen flaunting itself but can also be customised with an exposed carbon-fibre centre section.

“The Range Rover Sport SVRs in No Time To Die strike a unique mix of stealth and performance. Now you can replicate this combination and celebrate the release of the 25th Bond film with a single click on the Land Rover configurator.”

Land Rover’s teaming with the James Bond franchise isn’t a nascent thing. In the past, a Range Rover convertible appeared in Octopussy. Since then, several of its offerings have been shown during action sequences in other James Bond films. This movie will also feature a Range Rover Classic in addition to 3 Defenders and a Series-3 Land Rover.

The excitement knows no bounds and 007 fanatics are likely to get a treat at the cinemas by this Land Rover Sport SVR when it shows some of the mind-boggling shenanigans in the movie.