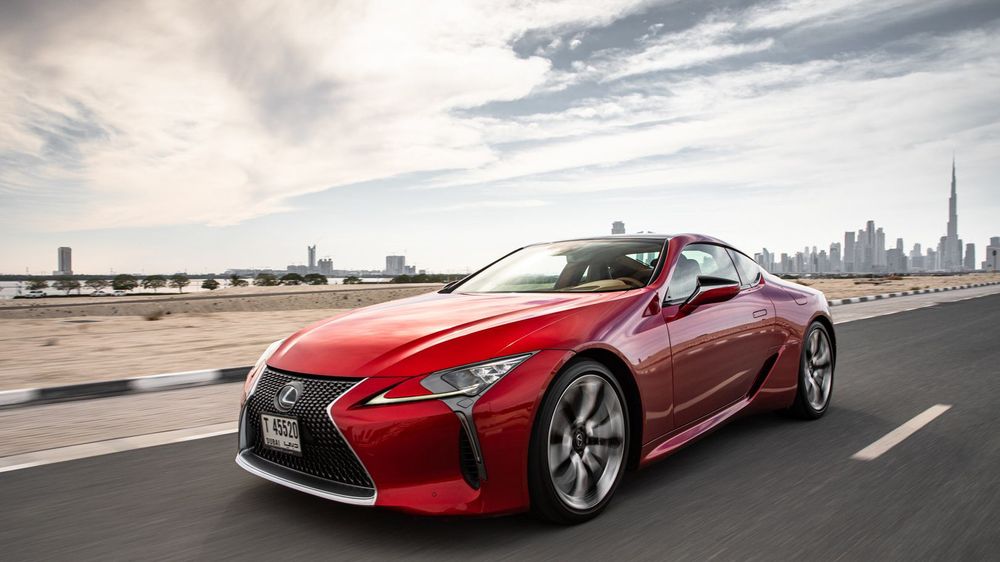 The German triumvirate consists of the household names which have inexorably strived to deliver perfection in aspects of space, power, efficiency and value. However, the Japanese are also doughty enough to give these undisputed kings, a run for their money. Most of us remember the tale where the Lexus LS once claimed the throne by obliterating the Mercedes-Benz S-Class and drew eyeballs towards the brand. However, in the coupe and convertible segments, Lexus never had a huge bandwidth of cars that were tantalising. Until now, that is. Behold the Lexus LC500 which brings to you style, purpose and clever engineering. 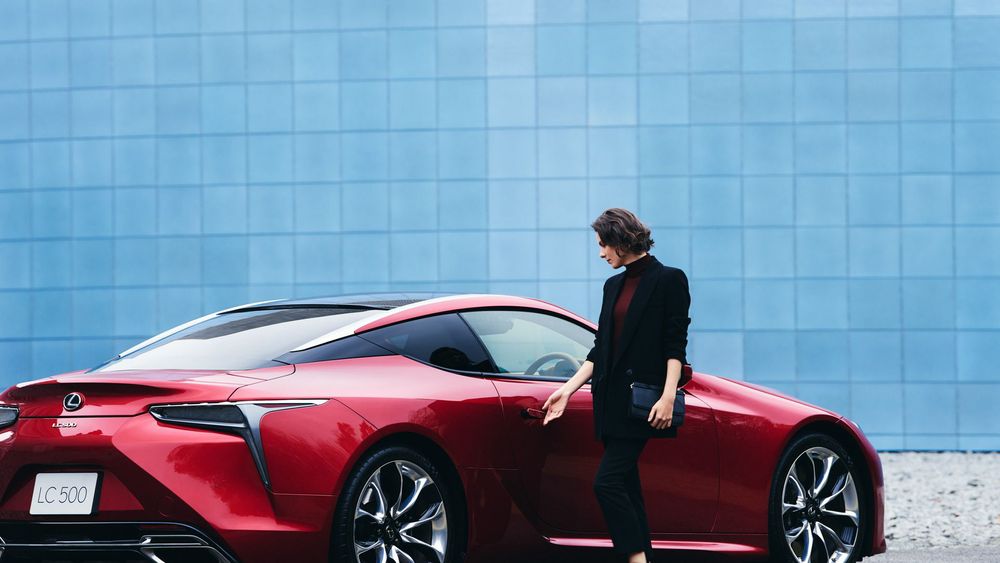 Dubai, despite being a pulchritudinal habitat to some of the best cars in the world, doesn’t display many LC500 on the roads revealing its rarity which is a good reason to purchase if you are in the market for a rare breed. While manufacturers such as BMW and Jaguar have thronged in this segment with the M850 convertible and the F-Type, respectively, it has been quiescent with just a smidgen variety of cars.

The LC500 tips the scales at AED 465,000. It may be exorbitant but gets you plenty of power and tech which you can check by visiting our website, YallaMotor.com.

Arguably, this is one of the paragon examples of beauty. Ogle at it from any angle and you will be mesmerised by its floating chiselled lines, the cavernous Lexus signature grille, which can be contrasted against the BMW’s kidney grille and the striking headlamps which appear gorgeous. The air vents, unlike most modern cars, are functional and improve the aerodynamics. Air passes through them to reduce turbulence. Nifty but smart add-ons are the door handles which pop up upon unlocking the car. However, it’s a shame that our tester doesn’t get the rear steering wheel which turns the rear wheels to aid manoeuvrability. 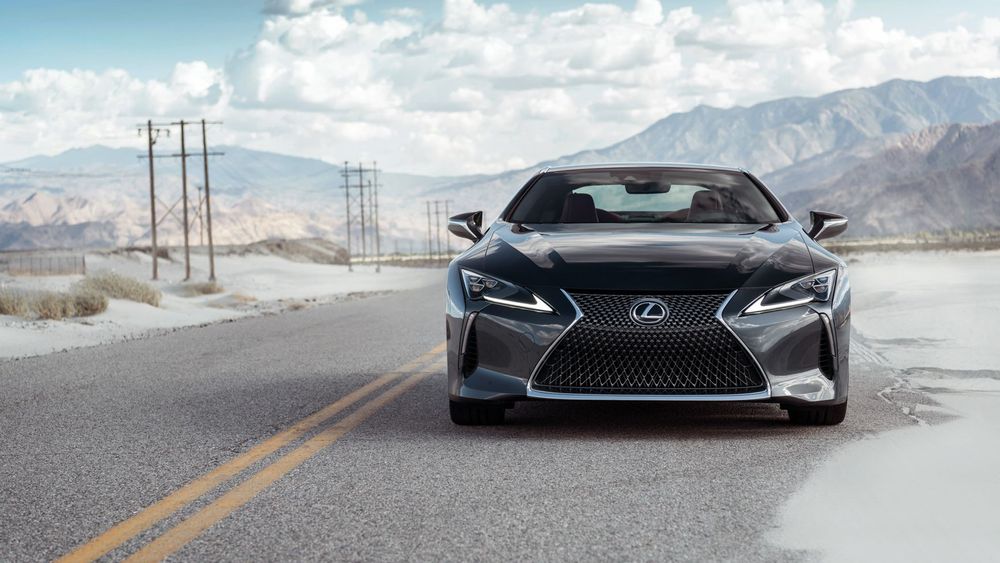 Viewed literally, it executes a drama with muscular rear derriere and marvellously carved out 21-inch rims, although smaller 20-inchers are also available as part of the standard equipment. Its swooping roofline with a metal strip elongates the girth and adds a pinch of sportiness to the otherwise, luxurious visage. The wheel arches also make a good impression with their size which you get to view on the wing mirrors.

In case this car hasn’t hypnotised you by now, let’s get you introduced to the rear where the most significant takeaway is the boomerang-shaped taillights with 3D effect which makes for an enticing look. However, why did Lexus incorporate a plastic cover for the tail lights is going to be uncanny. A stubby 149-litre boot means you can’t tuck in more than a toothbrush and falls short against the new Chevrolet Corvette C8. Lines which reminisce the Lexus grille and aluminium inserts for the quad exhaust pipes make for a captivating stance.

Fun fact: This is the first time Lexus has used a fabric roof for its convertible.

For the kind of money buyers will be outlaying to sample one, they expect a futuristic cockpit built with immaculate plastics and taut switchgear. Guess what! Lexus has delivered wholeheartedly on that front. The seats featuring aniline leather exert cushiness and will keep you relaxed even after long hours of driving. Our tester got the more premium seats which were more supportive than the standard spec. Highlighting its premium quotient, are carbon-fibre floor sills to denote you’re sitting in a car which is a good blend of performance and luxury. However, quibbles come in the form of a nasty infotainment system where you will have to tinker with several menus to just heat the seats on a winter morning. However, the AC vents were small in size but cooled the car in seconds. These are so efficient that these can blow your neck in the summer heat. 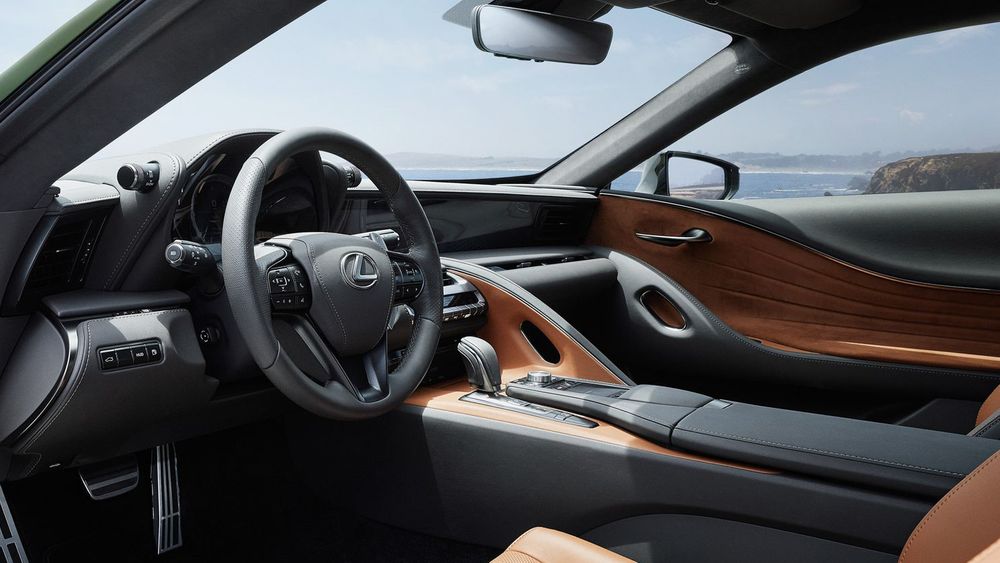 We also appreciate the design on the doors which the nabobs are going to enjoy. To ode to its Japanese genes, the door handles resemble a Japanese ninja dagger. Good quality materials are a prerequisite for an expensive convertible. There is no dearth of soft-touch materials in the LC. A thoughtful touch is the cup holders which can store a coffee bottle. Imparting a sense of occasion is a really cool glove box release. 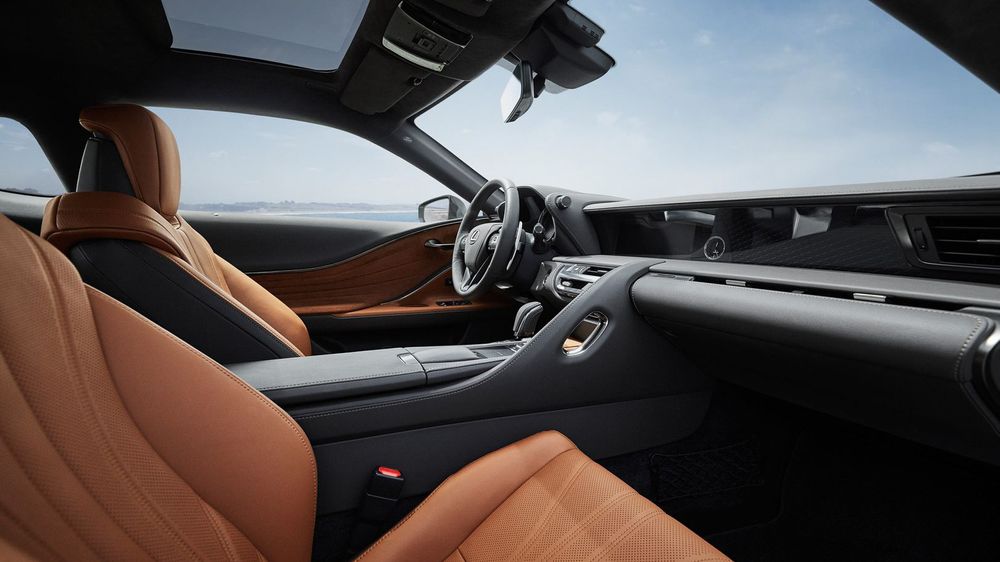 Albeit it is touted as a 2+2, regard that as a mere conjecture or simply, a marketing speak as the rear seats are best left for your young ones. Another toil which you will have to carry out is that you will have to put the seatbelt on every time you move the front seats. Maybe it’s time Mercedes-Benz taught Lexus a lesson in this regard.

It is the features and tech department where the LC disburses sheen. Press the ignition button to start the car and you’ll witness an almost theatre sort of backdrop for a lounge experience. The analog dials on the digital instrument cluster moving to the right and back when starting the car looks cool. Moreover, the volume knob finished in metal feels tactile and tells that you have placed your wager on the right car.

Forsooth, the best feature of this car is the Climate Concierge function which betters the average climate control feature by ensuring optimum temperature at all times.

At this price, the package also includes metal paddle shifters. However, if you’re in love with sound, you will appreciate the 13-speaker Mark Levinson Surround sound system which emits great sound on all the corners of the car.

However, you will have to make do with the fiddly buttons to open the convertible and all windows at once which are located deep down in the centre console.

Shifting our focus to the most crucial bit, we know what you’re wondering. The exhaust note-it’s very loud but buyers will appreciate the sporty rasp from the exhaust pipes. Under the hood, sits a 5.0-litre V8 engine which generates a stonking 470 hp and 540 Nm of torque mated to a 10-speed dual-clutch transmission that delivers power in a suave demeanour but with verve too.

Some goodies such as head-up display are only available with the sports-plus package. However, in our scalding hot conditions, it always felt blurry. In Sports mode, the suspension stiffens up and you get the signal that the engine is ready to take-off at blisteringly rapid velocities. However, press the Sports-plus mode switch and the car goes ballistic. However, to alleviate an innate drawback of rigidity, Lexus have added bracing underneath the car which though makes it a tad slower than its coupe iteration, also keeps it nimble.

But what should you do when you just want to cruise along the road on a lazy Friday morning? Get into the comfort mode and the car will glide like a soft carpet which does justice its purpose of being a Grand Tourer and not a sporty coupe. Adding to its roster of strengths, is the adaptive suspension which gets things precisely right for you. Put the windows up even though the roof can be down, and the car feels hushed on the inside.

Should you buy it? Without any apprehensions, if you’re in the market for exclusivity, seek charisma from your car and want a thoroughbred naturally-aspirated V8 that screams its heart out, then the LC500 is a great value car. Add to it, its comfy ride contributed by the best seats in business and that Lexus badge which is going to get noticed everywhere it goes, all its negatives are masked and that makes it a winner.