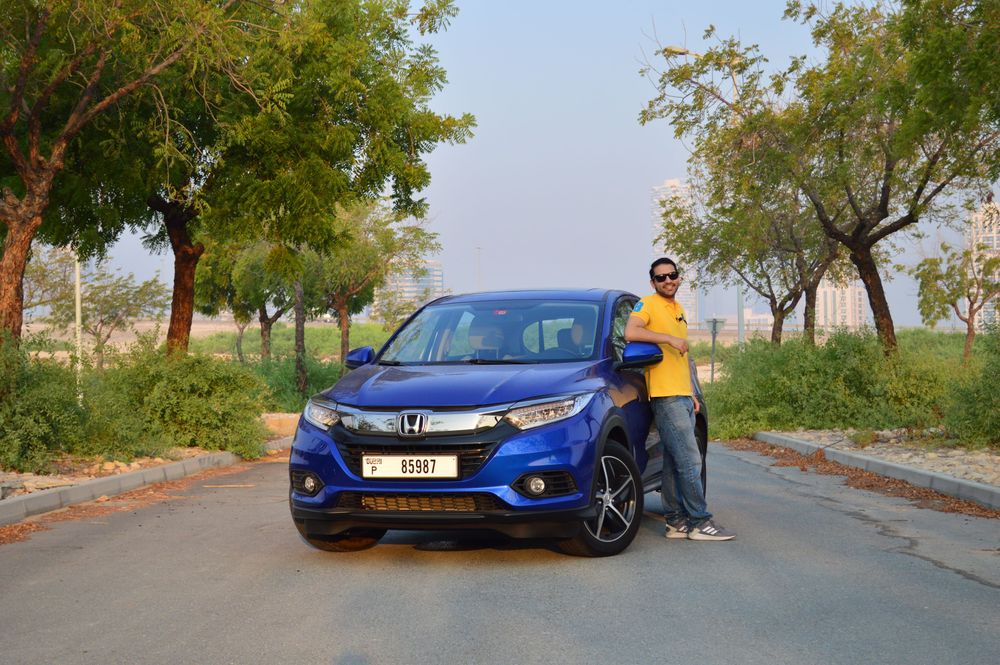 The car you see is the Honda HR-V, a funky and youthful crossover that aims to steal customers away from cars such as the Kia Seltos, Nissan Kicks, and Toyota C-HR. With a starting price of 59,900 Dirhams, the HR-V is the cheapest amongst its rivals but let us jump right into the review and find out what else makes the HR-V so very special. 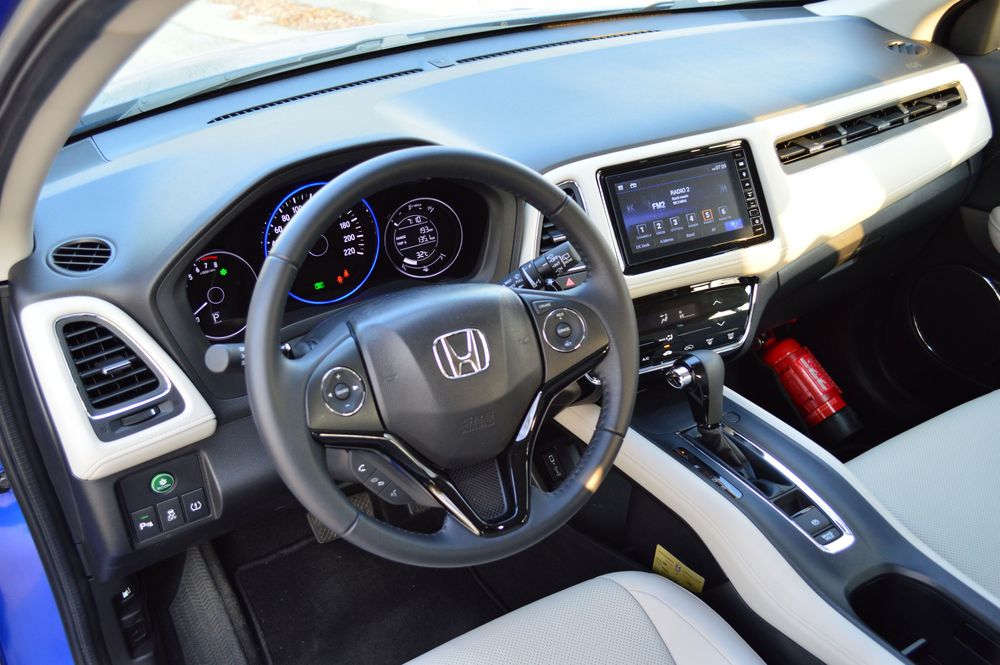 Now, some of you may remember the Honda Jazz Hatchback that used to be sold in the UAE, and this HR-V shares a lot of its components with it. But before we proceed to the technical side of things, I am sure some of you may be wondering what does ‘HR-V’ really stand for?

But let us keep that aside for the marketing guys to fight over and talk more about what it feels like to drive. Powering the HR-V is a 1.8-liter four-cylinder engine that churns out 140 horsepower and 172 Nm of torque, making it one of the most powerful amongst its rivals. 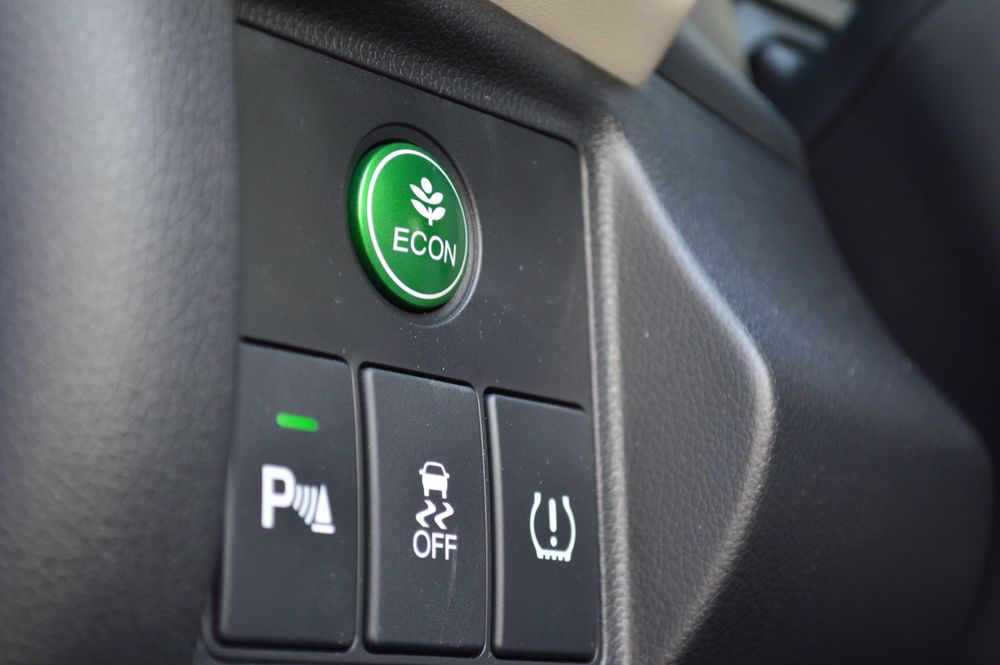 This power is pushed to the front wheels through a CVT transmission that Honda has adapted with 7-steps to mimic the shifting pattern of a 7-speed automatic transmission. But although the HR-V is one of the most powerful amongst its rivals, its focus is very much on fuel economy and it makes its objective pretty clear.

For starters, there is an illuminated ring around the speedometer that changes color depending on the way you are driving. If you are driving efficiently, the ring lights green but step on the accelerator pedal and it quickly turns white to remind you that you are not driving as efficiently as possible.

In addition to this, there is also an Eco drive mode that softens the response of the accelerator pedal and starts saving fuel by not allowing the car to respond as urgently as it normally would. Both these technologies come together to claim the HR-V can achieve up to 16.9-kilometers per liter and while I’m sure that is possible in ideal conditions, my average from driving over the past four days has been 12 kilometers per liter – lesser than the claimed figure but still impressive nonetheless. 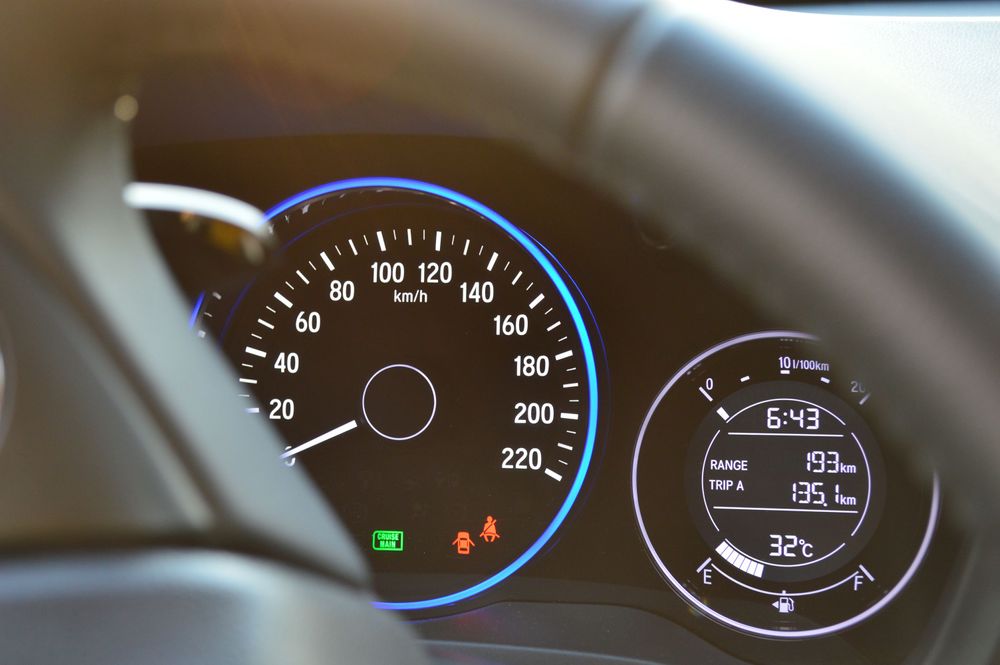 From an interior design and quality standpoint, the HR-V does not fare as well as its rivals and that is mainly down to the amount of hard plastic all around the cabin. Since this is the full-option model, it does come with a leather interior and extra points to Honda for trying to make it livelier with a two-tone color scheme, but even that is not as refined as what you’d find in the Kia Seltos. 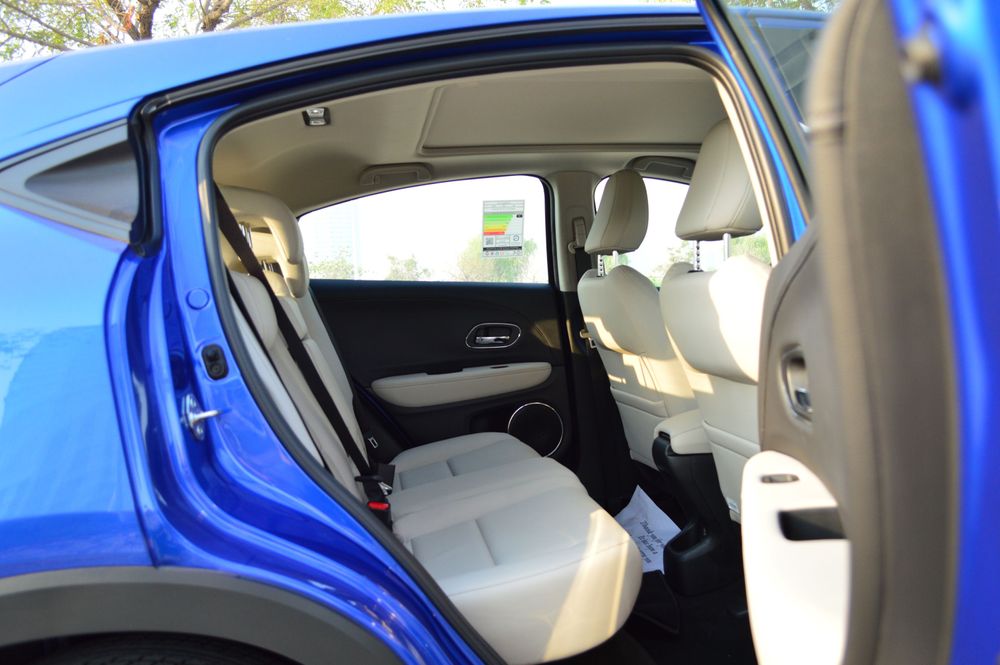 Just like the Jazz that it is based on, there is way more space in the back of the HR-V than anyone could imagine. The headroom is good, the legroom is great, and since these are Honda’s Magic Seats, they do fold upwards giving you extra storage space to store taller items. But while all of this is extremely cool, I really wish the HR-V came with rear A/C vents because in a region as hot as the Middle East, that is just another reason why the HR-V falls short when compared to the Kia Seltos or Nissan Kicks. 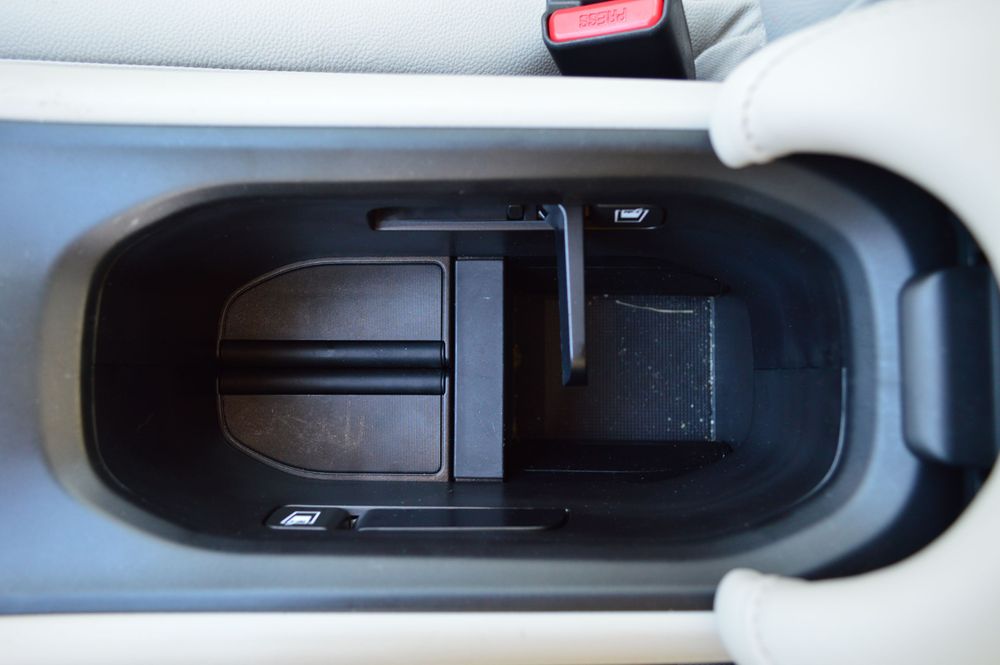 In terms of features, the HR-V does have its quirks, but we will get to those in just a moment, first let us take a look at all that it has to offer. On the safety side of things, there’s traction control, a tire pressure monitoring system, and emergency brake assist, not to mention airbags and all the other usual stuff, which come together to give the HR-V its 5-star Euro NCAP score.

On the comfort and convenience side, there is a panoramic roof, cruise control, Bluetooth telephony, rear parking sensors, and a rearview camera with 3 different angles. But by far my absolute favorite feature are the multi-purpose cupholders that can accommodate everything from a supersized glass of Coke to a small cup of tea and everything in between without spilling it.

Now, let us talk about the quirks and they mainly revolve around the infotainment screen. At first, it is quite impressive, it has got a photo gallery, the option to play video off a USB, Android Auto, and even Apple CarPlay but the resolution is very low, and it does seem very aftermarket. 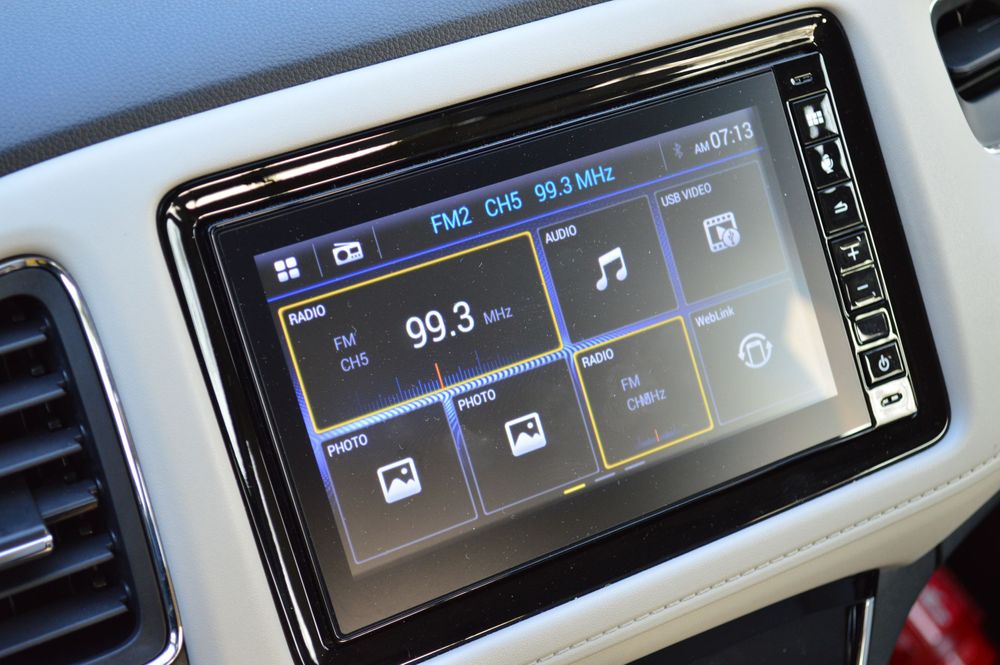 But that is not all, because when you scroll through the settings there are some very interesting options. The first of which is the DEFEAT button. I am not sure what exactly it does but I did mention this car is a lot like a Transformer and so it can only mean one thing, Hi-Rider Revolutionary Vehicle DEFEAT the enemy.

The other quirk is to do with the language settings. There’s English and then there is something known as India English, which when selected changes the accent of the voice command system to the strongest Indian accent and while I can’t decide if it’s funny or racist, the HR-V is made in Thailand, shouldn’t it have Thai English instead? 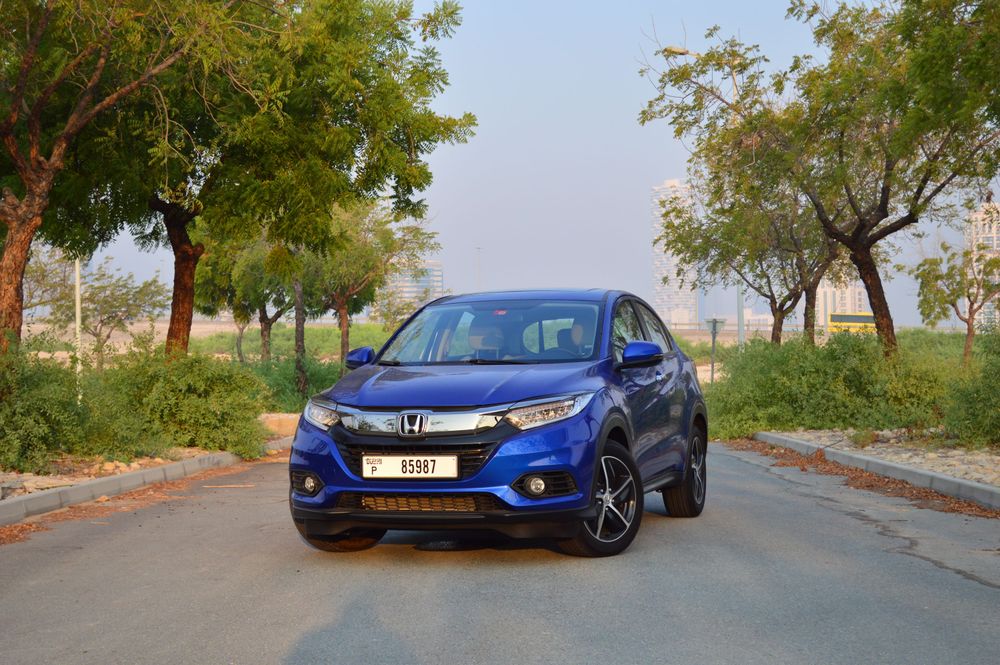 From a design perspective, the HR-V scores pretty well and that is because it is different and does not really look like anything else out there. A few cool touches are the dark chrome grille that extends over the LED headlights, 17-inch alloy wheels, and sporty lines embedded into the bodywork, not to forget the concealed rear door handles.

At the back, there is a roof-mounted spoiler with a stop lamp, LED taillights, and a chrome exhaust pipe. Boot space measures in at 448 liters with all seats in place, which to put into perspective, is the largest when compared to the Kia Seltos, Nissan Kicks, and the Toyota C-HR. 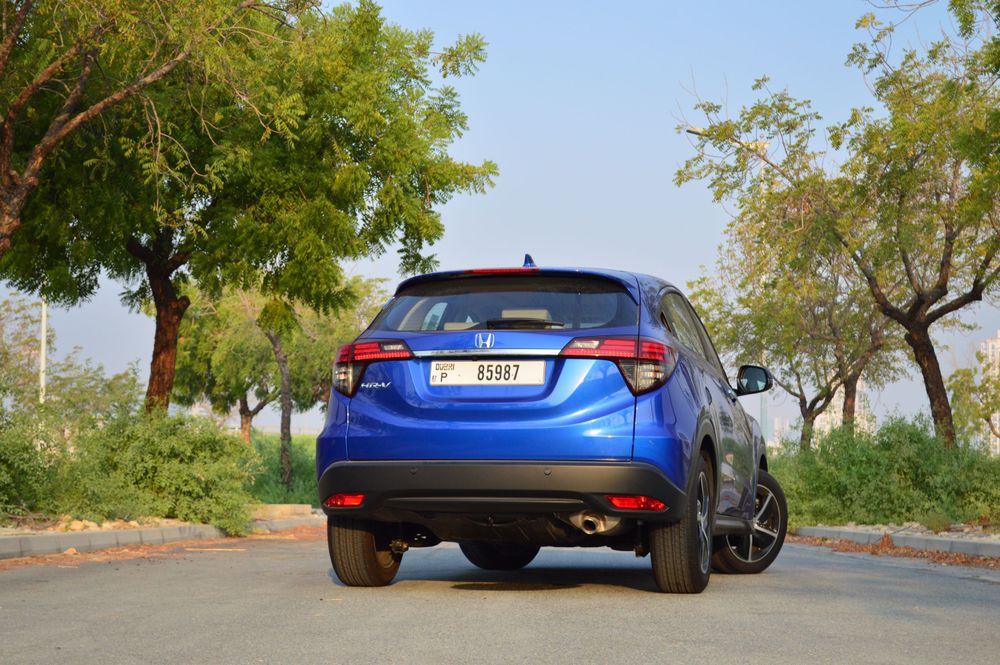 With this full option HR-V coming in at 87,900 Dirhams, it sits well in line with its rivals. While it is among the best of its Japanese competitors, the HR-V finds it hard to stand out when compared to its Korean counterparts, specifically the Kia Seltos.