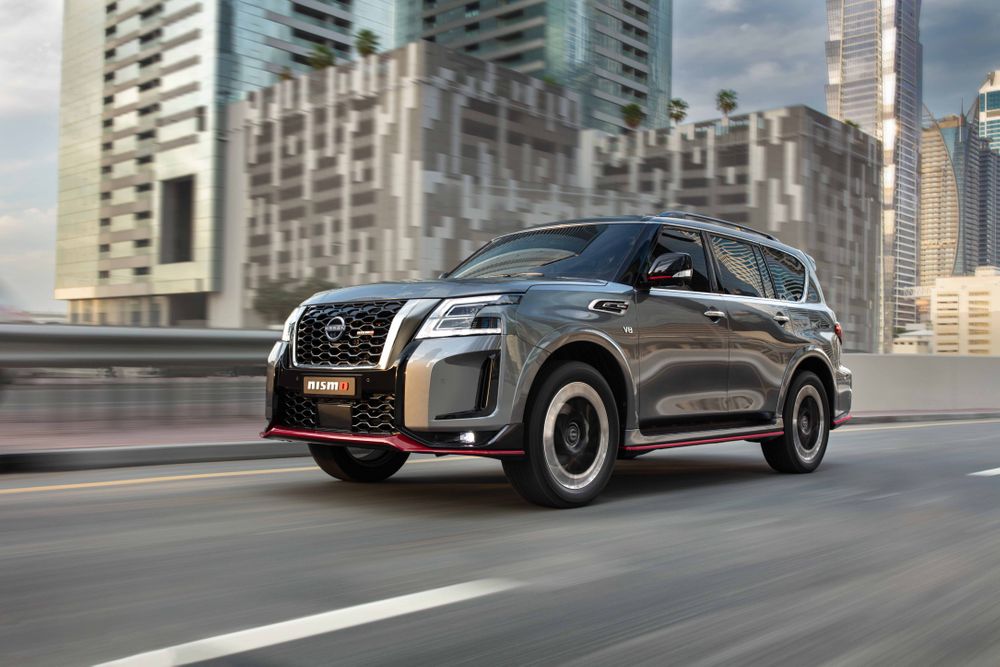 Every once in a while, we are offered a vehicle that is so good and so well-engineered for a purpose, it really impresses all of us – even if it’s over 70 years old. Of course, the current-generation Patrol came about just a few years back, brandishing a second facelift and it continues to be Nissan’s top-selling model in the UAE. Throughout its life, the Nissan patrol has been a fantastic tool if you were going dune-bashing or planning to go cross-country.

However, there’s also the Patrol Nismo – this would be your choice if you like a big SUV with some sporty characteristics. Now, we have the new 2022 Patrol Nismo to look forward to. It not only continues to be large and menacing, but with a 428-horsepower V8 under the hood, it has enough firepower as well. And while the Nismo variant doesn’t sell as many units as the standard model, the Nissan Patrol still holds a massive command over the region’s roads.

Design as striking as ever

The 2022 Nissan Patrol Nismo looks as sporty as its predecessor did. Of course, while it’s no X5M or a GLE 63 AMG, the Patrol Nismo is larger than either of those two high-performance SUVs. The Nismo-ness on the exterior comes in the form of an all-black 3D mesh grille that’s exclusive to this model, along with blacked-out headlamps, L-shaped air intakes in the front bumper, and an F1-inspired LED rear fog light.

Adding to the design highlights here are variant-specific features such as 22-inch forged alloy wheels, and Nismo red on the front lip spoiler, side skirts, wing mirror housing, and rear bumper. There’s also ‘Nismo’ badging on the vents found just above the front fenders. The rear also gets an ‘aero’ kit underneath the bumper, which is supposed to aid in aerodynamics, but its presence is more cosmetic than actual function. In general, the 2022 Patrol Nismo looks formidable, though it isn’t as sporty as the cars mentioned earlier.

A red interior to unlock that sense of sportiness

To make sure you don’t forget that you’re sitting inside a Nismo-spec car, the interior of the 2022 Nissan Patrol Nismo is finished in a sporty dual-tone color. The chunky steering wheel is wrapped in carbon-fiber and finished in suede, and it even comes with a red center-line marking, just like in a racing car. Then there are the posh leather seats that are trimmed in a unique hexagonal quilted pattern, and faux carbon-fiber trim bits along the doors and center console. Speaking of that, Nissan has redesigned the entire central console and made a few tweaks to the instrument cluster as well. Furthermore, the 12.3-inch infotainment touch unit now gets wireless Apple CarPlay and Android Auto. 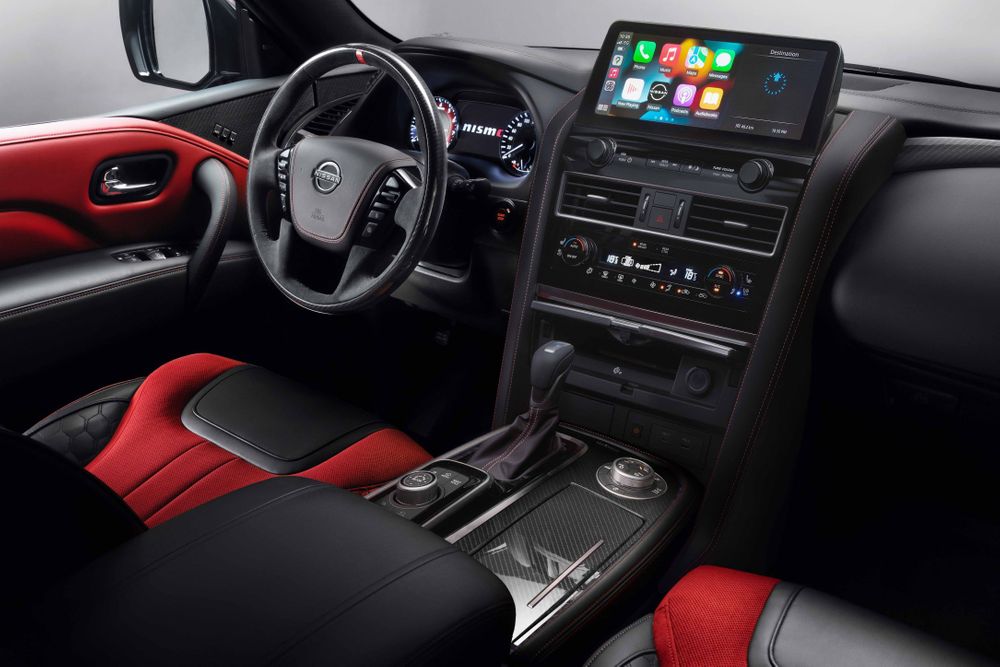 When it comes to the 2022 Patrol Nismo’s cabin quality and its overall build, this SUV sure earns brownie points here. That’s because most of the materials used here are pretty high-shelf. In fact, you’ll be forgiven if you mistook this cabin for that of far more expensive cars. It really is that good. Moreover, since the cabin is vast, you’ll not have to bother about feeling cramped in here. Given that the Nismo is the top-of-the-line model, there’s no dearth of cool features either. The equipment list also includes the Nissan Intelligent Mobility (NIM) features that sees goodies like Intelligent Emergency Braking with Pedestrian Detection system, Intelligent Forward Collision Warning tool, Smart Rear-View Mirror, and High Beam Assist amongst other safety tech.

One thing the 2022 Nissan Patrol Nismo is definitely not short of is power under that big hood. Sitting in the bowels of the Patrol Nismo’s engine bay is a 5.6-liter naturally-aspirated V8 that has been worked upon by world-famous Takumi craftsmen. In this case, the motor produces a meaty 428 horsepower and 560Nm of maximum torque, and is coupled to a 7-speed automatic transmission. The Nismo’s drivetrain further includes a proper four-wheel-drive system that also integrates a locking rear differential, plus custom Bilstein shocks for improved cornering. In beast mode, the Patrol Nismo can hit 100 km/h in 6.5 seconds, whilst V-max is around 200 km/h. In case you want to buy one here in the UAE, make sure you’ve access to AED 389,900.