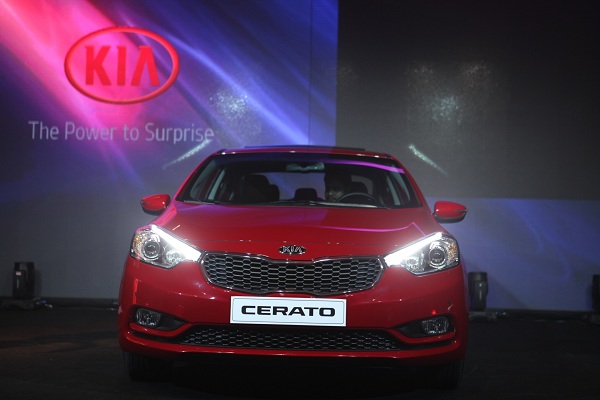 Dubai, UAE - The 2013 Kia Cerato was officially launched in UAE on Tuesday February 12th, somewhat belatedly considering the cars are already being sold and on the roads and the media has driven the car as well.

The launch was held at Park Hyatt in Dubai in a glittering exhibition to a packed audience of well-wishers, media, distributors and industry insiders. The Cerato is being touted as the answer to Nissan Sentra, Honda Civic and Toyota Corolla, among other compact sedans in the GCC region. The Cerato adds fuel to the fire in an overcrowded battle of C-Segment comact sedans, which means interior options and reliability are two factors where the war will be largely fought.

On the plus side, the Cerato has great exterior styling compared to the likes of stalwarts like Corolla and Civic. Another factor going Cerato's way is the interior features, some of which are not even found in most compact sedans, like rear AC vents. The Cerato aims to provide more features for the money than any other compact sedan.

With all the major improvements in style and features, it will be interesting to see how the resale value is affected over time. We predict the resale value is likely to be positive, provided quality and service levels are maintainted. Generally this is an area where Japanese rivals have an edge, however it is impossible to ignore the aggressive push by Korean competitors like Kia and Hyundai.