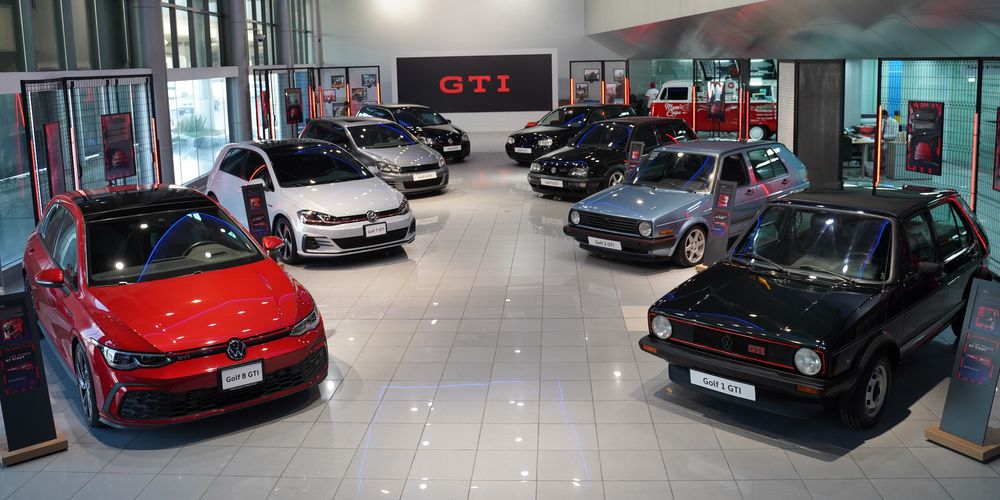 45 years, 8 generations and millions of fans, this is how coveted the brand Golf GTI has become. A hatchback which exemplarily blends the oxymoron high performance with everyday usability, the car has created history by redefining its segment standards not once, but 8 times. Being launched in the year 1976, its inoculation in the UAE marked the beginning of an alliance between VW and Al Nabooda automobiles, the official distributor of VW cars.

To commemorate the legacy curated by the car, all 8 eons of the car were parked alongside each other in a graceful demeanour at the Al Nabooda showroom between the 22nd November and 27th November showing the evolution of its form, style and functionality while retaining the typical Golf traits in all the generations. Mastering the game every time in an aplomb manner and being as feisty as possible amidst the back-breaking competition is hard to execute but it’s stunning how all the generations have managed to pull it off like an absolute baller.

Offering several trims on the platter for those rummaging just the moniker, style and impeccable build quality of the car to those wanting a solid dose of features and ultimately performance, it is a car for everyone to relish the perfection of workmanship.

Fanatics of this car and automobile enthusiasts alike, missing studying history can experience the idyllic at the dealership providing information about each generation and the advancements made in design, safety, features and performance with a new generation rolling out.

Since 1976, the car has faced frantic rivalry from models such as the Ford Focus ST, Hyundai i30 N, Peugeot 308 GTi and the Honda Civic Type-R and SI to tag a few. Even then, the car remains one of enthusiast’s first choices today.

VW Middle East Managing Director Victor Dalmau commented on the event, “The GTI is an icon in the automotive world. A living legend that has become a brand by itself. Each of these 8 models represents 45 years of cutting edge automotive technology evolution. It’s such a rare privilege to see all eight versions of this engineering masterpiece all in one place.”

“The GTI perfectly pairs daily functionality with the performance of a true sports car, a balance so unique and difficult to find. 45 years and eight generations later, it continues to appeal to drivers across different age groups and nationalities: we call them Generation GTI”

With 230 hp at your disposal, it ensures confident acceleration right from the word go. Seeing everything in the wing mirrors after aggressively launching the car on a traffic signal is a satisfaction which enthusiasts hanker for and the car provides them with it enormously well. VW cars were known for their immersive driving experience and unmatched agility which is synonymous with this car which provided the German brand with a great base to warp for all its upcoming models.

Icons aren’t built overnight and while many come and go, a diminutive number of them continue to stay in production for as long as the Golf GTI has. With the new one debuting this year, it has upped the ante in all aspects of prime importance considered by the most finicky enthusiasts.