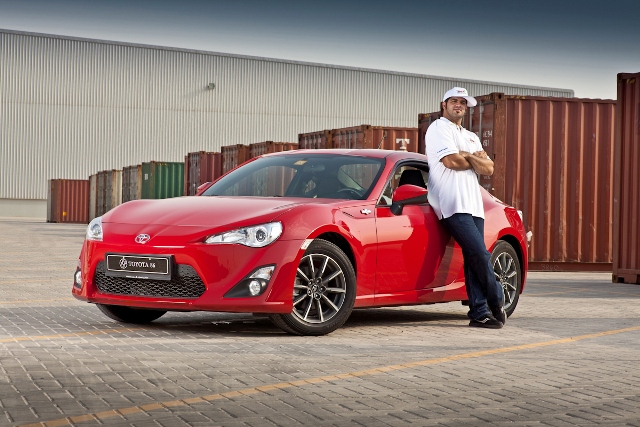 Ultimately, its driver’s car feel, combined with its exceptionally balanced performance, compelling style and surprising fuel economy was what convinced the voting members of the MEMA judging panel to give it the award.

Commenting from Al-Futtaim Motors, exclusive distributors of Toyota in the UAE, Simon Frith said: “We are very delighted with these accolades. This is a great recognition to Chief Engineer Tetsuya Tada and his passionate team, and reinforces Toyota's strength in developing popular sports cars.”

“It is an emotionally engaging sports car - one that can be fun on the road, making the drive a lot more exciting. The Toyota 86 heralds the comeback of the Toyota sports car breed. We look forward to receiving more cars reminiscent of the glorious Celica, MR2 and Supra models” he added.

Since its launch in June 2012, the car has generated overwhelmingly positive reviews in local and regional publications by some of the best automotive journalists and critics who agreed that Toyota 86 hit the brief of being a really fun-to-drive sports coupe while also being impressively affordable.

Shahzad Sheikh, Co-founder of Motoring Middle East and one of the judges at MEMA commented: 'The Toyota 86 is a legend in the making. It’s brilliantly conceived, unerringly executed and perfectly balanced in every way. The car is addictive to drive, practical to live with, reliable as only a Toyota can be, and you just can’t argue with that pricing.”

He added: “It’s a game-changer, an indisputable trend-setter, and a certified future classic. A car of this kind only comes along once in a very long while, and in my book it was robbed of the ultimate recognition, as I believe it deserved not only the Sports car of the Year title, but the Overall Car of the Year crown too.'”

Besides achieving all of its objectives in terms of sales, the car managed to reignite a long-dormant segment of the market, providing a perfectly tuneable machine that almost every motorsports enthusiast would want to own. With its sporty style, performance, authenticity and light weight the Toyota 86 has proved to be the drifters’ first choice in the UAE and across the globe.

Shortly after its launch, Al-Futtaim Motors awarded a Toyota 86 to Ahmed Al Ameri, the UAE drifting champion and driver at Toyota Emirates Drifting Team to conduct a series of modifications according to his expertise and make it fit for the upcoming drifting seasons in the UAE and the region.  The modified Toyota Emirates Drifting Team 86 was officially launched in October and will be taking part in the upcoming drifting championship season.

The entirely driver-oriented vehicle is based on a new platform featuring the highly advanced aerodynamic body shell stretched over the engineering hard points, making it the world’s most compact four-seat sport car design.

Conceived to focus specifically on the purity of the classic sports car experience and fine-tuned to satisfy the most discerning enthusiast, the Toyota 86 inherits the spirit of former Toyota sports cars that reward drivers with pure driving involvement.

Toyota 86 has been winning tributes across the globe. In Australia it earned the Car of the Year Award at the annual Drive awards and was named Best Performance Car under $60,000 as well as topping the People's Choice vote.

At MEMA, two other Toyota vehicles were finalists – Yaris, for Best Hatchback Car and the Camry for Best Midsize Sedan.

The nomination and judging process for the third edition of the MEMA awards lasted well over eight months. The judging criteria ranged from cars’ design, handling and safety features to the vehicles’ emotional appeal and value for money.

MEMA is an annual event organized by Expo Centre Sharjah with the support of Sharjah Chamber of Commerce & Industry.