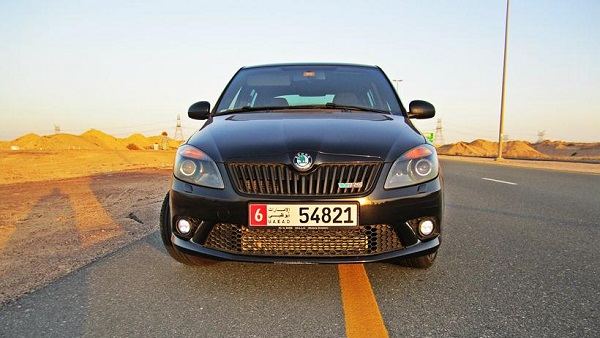 Any car coming out of the Volkswagen family (Skoda is owned by VW) typically comes with a certain amount of promise – to do what’s mentioned on the box. They may not have the most exciting cars or over deliver on any of their promises, but they do know how to give the people in any given segment, pretty much exactly what they want. However, any normal person isn’t going to jump about at the thought of a tiny hatch back sporting a 1.4 litre engine but after spending a few days with the Fabia VRS, I can tell you that this isn’t a book that should be judged by its cover. 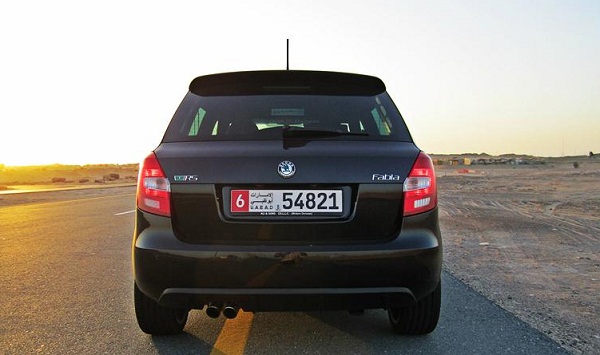 As first appearances go, the little Fabia doesn’t do much to help its cause. An odd ball shape of a little hatch riding a little too high on wheels that look a little too small. Despite the company’s Czechoslovakian roots, the car reminds me of a little French man wearing a beret.

The appearance of our test car was marginally saved by its ‘Black Magic’ paint and black accents on the grille and wheels. The only indication of this being anything other than a little city run about are a couple of VRS badges (one on the front grille and one on the boot-lid) and some bright red brake calipers poking out from behind the darkened alloys. 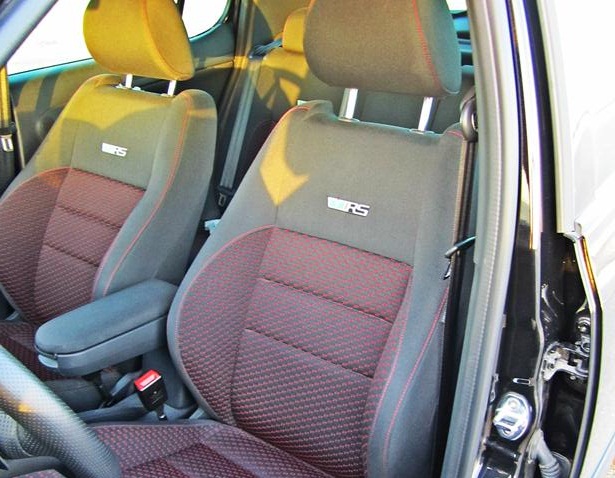 Blip the key fob (standard VW fare), a tug at the door handle and Oh dear…..! I’ve long been a fan of the quality interiors produced by the VW family but the Fabia’s interiors quickly give you an indication of where the brand stands in the family hierarchy. Swathes of hard and brittle plastics cover the interior of the Skoda. It’s a little disappointing that even regular touch points haven’t been considered to be covered with softer materials as can be attested by my bruised right knee that rested against the hard edge of the center console.

Aside from quality, the interior is generally quite ergonomically laid out. Buttons are kept to a minimal as the infotainment system is predominantly controlled through a touchscreen (surprising at this price level).

The seats are a saving grace. They are excellent in shape with side bolsters that hold you in place during cornering without really digging into your hips. However, they are covered in cloth (the only leather in the car is used to cover the steering wheel) and have some of the most uninspiring patterns printed across them. 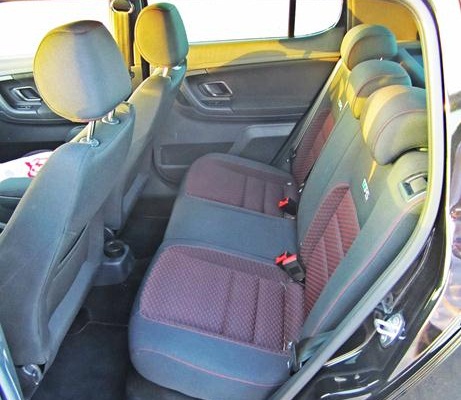 Being a fairly small hatchback, space is as can be expected from a car this size. The accursed boxy shape of the exterior does allow for sufficient room for passengers and a surprisingly sizable boot. Four full sized adults could fit in the cabin without feeling like sardines in a tin can and there are enough cubby holes around the cabin for the general paraphernalia one tends to carry with them. The boot is the surprise of this tiny package and with a little bit of imagination could easily hold 3 medium sized pieces of luggage along with some other miscellaneous items.

With large glass surfaces, visibility is really not an issue and you can place the car with absolute ease. However, for those who find parking a bit challenging, there’s even (quite unnecessarily) reverse sensors to help you avoid any parking dings. 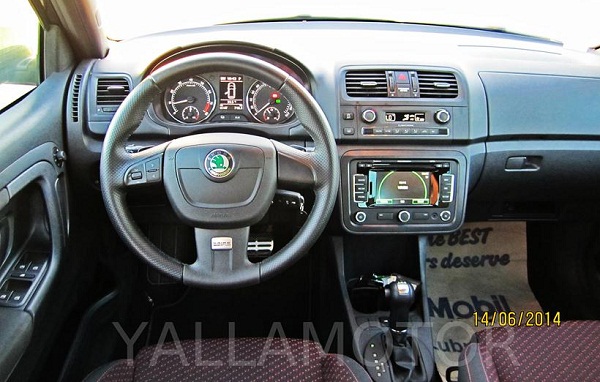 While this section reads technology and options, the reality is that the items that the Skoda Fabia VRS portrays as technology options are things we have come to expect as standard from modern cars. LED headlamps, cruise control, touchscreen infotainment systems and parking sensors are expected in cars in every segment today. While our test car did appear to have the option of a navigation system, the maps were not set up for GCC and hence we cannot comment on its usability or quality, but is definitely an unexpected but welcome feature in a car of this size.

Dare I say it, but our region here just doesn’t seem to warrant manufacturers to push safety features across their models. While the Fabia has electronic driver aids like ABS, ESP and a few more acronyms to help keep you facing the right way around, the scary reality is that the car has just two air bags – for the driver and front seat passenger. This immediately sees any young families straying away such models due to the lack of backseat protection. However, the honest truth is that most competitors in this segment don’t do much better and hence the Skoda can’t be made an example of for poor safety specifications.

And that rounds up most of the car - so far, so ordinary little city hatchback. But here comes the meat…. 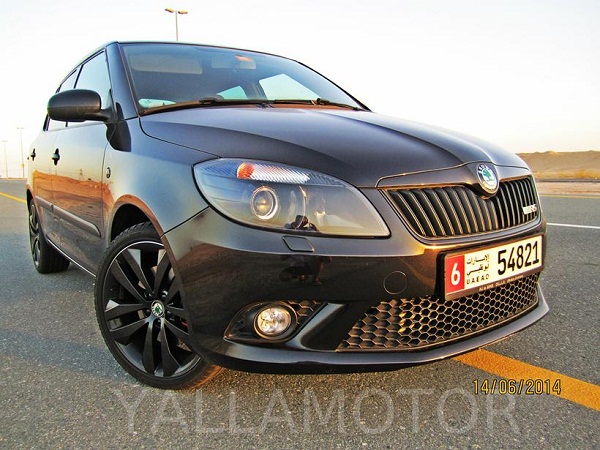 Remember that 1.4 litre engine I mentioned at the beginning of this review. Well here come your bragging rights. Turbocharged and Supercharged. That’s alright…take a moment and let that sink in. How many cars allow you the right to say their motors are turbocharged and supercharged? This twin charged motor throws out a respectable 180bhp. In a car weighing just over 1300kgs, that’s a fair bit of poke. However, it’s the way the 250Nm of torque is delivered to the front wheels through the 7 speed dual clutch transmission that will dictate the way you drive this car, that is once you get over the initial torque steer – not much, but a noticeable tug left and right.

While turbo engines are usually associated with turbo-lag, the Skoda picks up with whim from anywhere over 1500rpm. There may be a slight delay between hitting the accelerator and the actual acceleration, but it’s not going to trouble you unless pulling away from a complete standstill. There is immense mid-range torque that allows for a very relaxed driving style (unlike the old naturally aspirated Clio RS that required a real wringing to make meaningful progress) and when mated with the dual clutch transmission, offers surprisingly nippy real world pace. In fact, taking the Fabia VRS to its 7000rpm redline doesn’t do it any good. Short shift around 5500-6000rpm and you’ll always be in the meat of the power band. The only downfall of this engine is the fact that it has quite a terrible soundtrack. The Fabia may not have a V8, but surely there are decent sounding four cylinder engines out there. A fruitier intake and exhaust system would work wonders for the Fabia’s character.

We clocked a 0-100kmph time of 7.5 seconds which is just marginally off the stated time of 7.3 seconds – probably some of the most accurate readings we’ve seen. And this despite the car being tested in 35 degree heat – not ideal conditions for a turbo charged engine.

The transmission offers smooth and quick gear changes when pottering around town and whacks them home when pressing on. Gear changes can be manually controlled with steering mounted paddles (plastic again) or via the gear level. I would typically have preferred a manual transmission – a shift stick and three pedals – but with the DSG, the transmission is best left to do its own cog swapping as it does a fairly decent job. It’s only on some of the more seriously twisting roads where taking over gear changes may make sense. 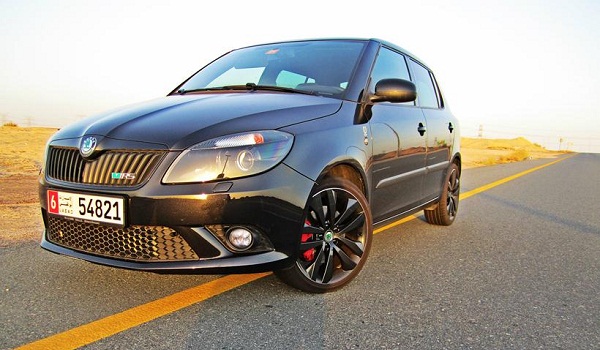 I’m going to come right out and say it, the Skoda Fabia VRS has the worst suspension setup I have come across on a road car. It is brutally hard for daily use (I use a Honda S2000 as my daily driver so can’t be accused of being too soft) to the point of being unreasonable, thumping against even the slightest undulation on the road. Rumble strips feel like speed breakers in their own right, potholes feel like craters – the result of 17” alloys shod with extremely low profile tyres.

However, when the road does get interesting, so does the Fabia. Those big alloys help the little VRS cling on through tight corners with barely a trace of understeer. The lack of a limited slip differential is really not missed as you need to be pushing at an unhealthy speed before the front starts to wash wide.

Into the corner and the Fabia shows real character – being absolutely playful and giving you options to adjust its line. Push hard and it clings on to the bitter end. Lift off slightly and it tucks itself into a corner. Throw it into a corner with reckless abandon and you will even get the rear to come into play. The modest power letting you chuck the car about without the fear of finding yourself wrapped around a tree or going off facing the wrong way. It’s positively inspiring. 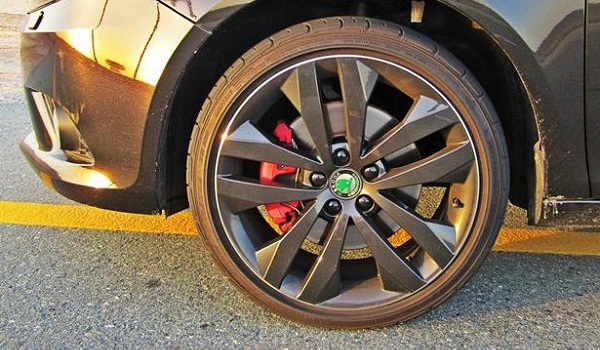 Those red calipered brake discs aren’t just for show. The Fabia may constantly coax you into pushing harder and deeper into corners, but those stoppers real do haul you down to a stop in a reassured manner and most importantly, with excellent pedal feel. While repeated hard use does lead to a slight lengthening in the brake pedal and some fade, this is in extreme conditions and would not affect the typical user in any way.

At AED 80,000, the Skoda Fabia VRS is the cheapest way to enter the hot hatch market in the UAE. It also has no real rivals in its diminutive segment available in this region (Polo GTi, new Clio RS) and hence has the market, if one even exists locally, to its self. While the reason for the low cost is evident in the quality of its interiors, the car is an absolute riot and the engine is a peach. However, the only reason I can’t whole heartedly recommend the Skoda is the Focus ST. While the American is notably larger and much more powerful, it’s also got better interiors and is much more refined. And yet, it starts at just AED 95,000 which is not that far off the Skoda. The Skoda is a great car on its own, but if it were my money, it wouldn’t be going to the Czech!