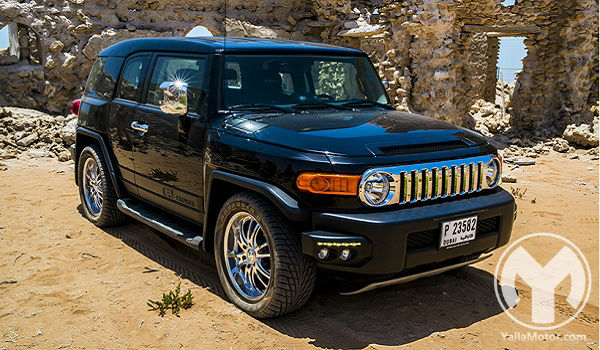 The UAE is full of four wheel drive vehicles, you can’t move for them. America versus Japan on the roads, across the sands and in the parking lots, they are everywhere.  My first impression of the car was that I am looking at a ‘toy’. I could just imagine seeing this sitting on the shelf in the toy store waiting for some young boy to persuade Mum and Dad to buy it but you know what? I liked this feature. Chunky whimsical military feel put together with cheap plastic that is easy clean just in case you drop the ice cream, making even the older feel young. This car makes you smile. Just can’t find the compartment for the HP7’s. 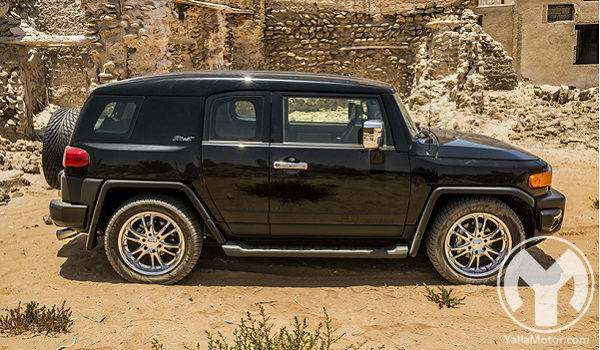 The FJ has cute looks, yes cute. It has that chubby young full face while emulating the four wheel drives such as the Hummer and the Jeep models and keeping the highlights of the old tin box that was once an FJ of the 70’s. The FJ comes across like a young adventurous boy trying to do what the men do while still pointing his laser gun at everyone around him. Much like the feeling you get having just walked out of the movies. Superman has just saved the world, now you feel powerful and can do the same…

Among rivals, the FJ would most likely be placed against the Jeep Wrangler. Styling is close with the more closely placed headlights and the open metal grill and the go anywhere ethic. The only drawback here is we are featuring a car that has a limited off road capability in this “Street” guise. 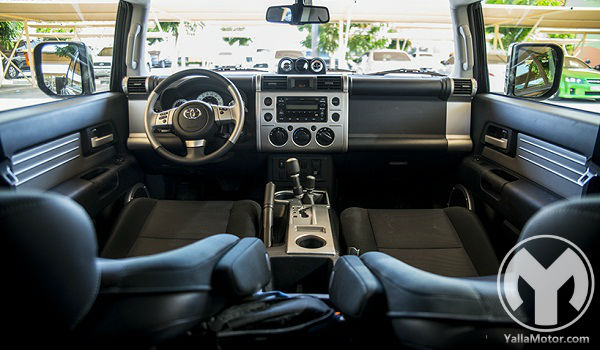 This car is a sea of plastic, with cheap chunky switches and does feel like an expensive kid’s toy. No metal or chrome in sight. Sorry I lied, there is a chrome Toyota badge in the centre of the steering wheel. You must keep in mind that the car has been built to be a four wheel drive. Plastic yes, but it’s so easy to get cleaned after riding the dunes or spilling that fizzy drink. This car feels like the family parrot that has clipped wings and wants to fly. The reason being the FJ has been named the ‘Street”. With 20 inch “Boss Motorsports” bling wheels and slammed (lowered) suspension, it’s not going to be easy riding the dunes or wading through rivers.  With this in mind surely a little more could have been done on the inside.  I truly think that more function and decoration is needed; after all there’ll be no cleaning out the sand and brushing off the dirty boots in this model. To bear in mind that this is the last year for the FJ Cruiser, why not make that extra effort? To be honest I think that people might be tinting the windows not to keep the sun heat down but to hide the interior while parked on the street. Seating is of average quality, not comfortable enough for anything more than a few hours (partly because of no lumbar support) but durable enough to deal with rough conditions. 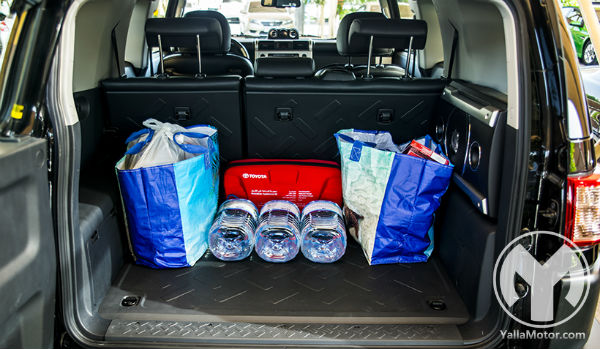 Space is great. For those in front, everything in front of the B pillar is like a goldfish bowl. Driver has two huge mirrors that would be comfortable on any truck and a huge front screen highlighted by the fact it needs three wipers.  Jump into the back and things are different. Passengers may feel a little claustrophobic.  After getting into the car through the suicide doors that can only be opened when the front door has been opened, you may feel a little trapped.  Otherwise the room in the rear is ample. Not so easy getting in and out though. The rear seats are split fold but when flat are not at the same level as the rear boot space. However when folded provide a huge space.

Technology mmm… not sure that I really found any. Back to basics comes to mind, options are pretty limited but then that’s expected of a four wheel drive. The fact this is a limited edition car, I would have expected more.  Stereo and functions were very easy to use, up to date with a USB/AUX connection and steering wheel controls. Turn the stereo up and you think you have just walked into a night club. You will look in your rear view mirror as if watching the puddle in the film Jurassic park. The woofer that is tucked into the boot of the car will thump like tyrannosaurus rex is on route.

Simple to use also was the cruise control. Parking sensors come fitted, which are always handy for this size of vehicle. One tiny thing that was missed was electric one touch windows. I am a fan of one touch windows and the FJ let me down.  They do come in handy sometimes.

I am of 1 metre 75 tall and I struggled to find a comfortable position with my arms.  Maybe any tall Japanese guy generally has longer arms than in the West but the fact is I could not find a completely comfortable driving position due to the steering not having reach.  Rake it had but no reach. So if to be any taller you need to have arms like Lima’s or drive with your knees closer to the steering wheel.

One thing I thought to be a little pointless was the on-dash compass, clock and inclinometer. Compass and clock may be of use but no need to be top mounted and the inclinometer, what is the point of having an inclinometer on this model?  If anything, the only time you’ll see this move is on exiting the highway and hitting the bends. 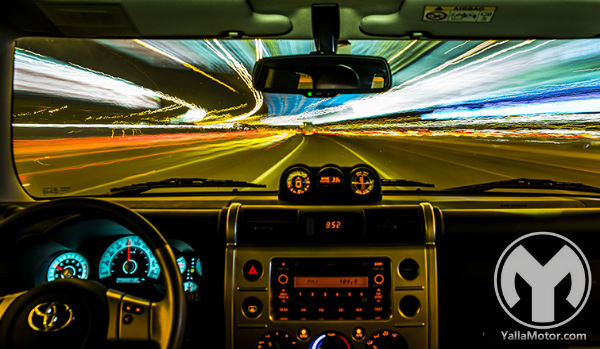 There is not much to write home about on the safety features here.  Ok the usual Anti-Lock Brakes (ABS) and Stability Control are present.  Driver and passenger airbags but that is pretty much it. This is a four wheel drive though and thus the build of the FJ alone will be stronger in frame and chassis. Quite standard really if the car had been nearly 10 years old. 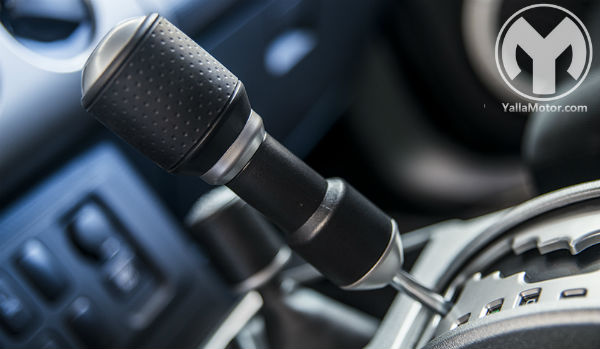 This is a Limited edition of 200 FJ Cruiser Streets, wearing jewellery and holding a 4.0 litre V6 with 260HP and 271 lb-ft of torque. Where is the V8 Toyota? With all the four wheel drives in the group that have V8 engines and as this will be the last of the FJ, where is the V8? The UAE loves the V8 and this is a ‘Street” version after all.

The 5 speed transmission is extremely smooth.  Almost feels like a DSG. It’s so smooth when paired to this engine with its almost equal power and torque. Within the car you get the faint and similar sound of a Porsche note from the back of the car, well I think so anyway.

The car is fitted with an A-Trac system, rear diff lock and has a very manual four wheel drive select but unfortunately this has no real use in this model. Take the car across the tracks and it’s happy, try to take anywhere near the sand and the fact that you don’t want to ruin the 20’s holds you back but the car will rub its belly. Suffice to say I had no further intension of going off the tracks.

As speed goes it is rather frugal for the power. 0-100kph was reached in 8.86 seconds. It pulls clean and without too much effort, while changing gear smoothly. 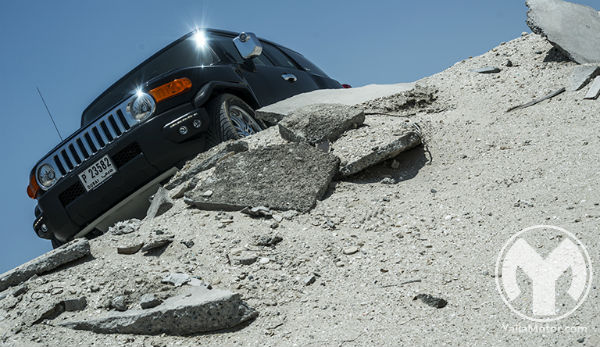 Anti-lock Brakes (ABS) and stability control are present and the suspension has been lowered. That said though you do not feel the difference in ride from the regular models. This reacts like pretty much any four-wheel drive and will role quite a bit if not careful on the bends but on the whole a very smooth and stable ride.

3.10 seconds. Yes, 3.10 seconds was all it took to stop this two and half ton vehicle and it stopped quite gracefully too. The ABS hardly came into play, which meant maybe there was more braking in the car to be had.  It surprised the hell out of me!

Pretty much a stock car, a few bling items on the exterior, no V8 and lowered suspension didn’t make this car as limited as is could be. This is the last of the FJ and Toyota could have sent this car out with a bang, instead it’s more of a pop.  I am a fan of the FJ though and would struggle to choose between a Wrangler and this as a car buyer. It makes you feel young and it keeps a smile on your face. For this reason alone, I would rather do with the standard model and be able to enjoy the dunes and the car for its true purpose of existence. Adventure…