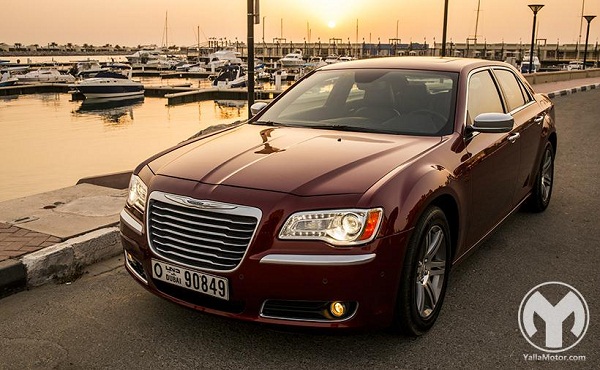 The 300C started its life in 1957, designed to hit a premium market.  The aim was to bring luxury and refinement of premium cars to the people of United States without the need to bust the bank. In 2004, Chrysler, with seemingly no regard for the 57 model, brought again to consumers an all new 300C. It was definitely different and had seen a ruler in its drawing. The '57 was sleek for the era, with quad headlamps, large cockpit, winged rear lights and two doors. The 2004 on the other hand had turned into a barge and had gained two more doors.  Built over an E-Class chassis, you may have expected to see some Euro influence. After all, their vision of this car was to sell across Europe as well. Expectedly, I kept an open mind when collecting this new 2014 5.7 liter 300C. 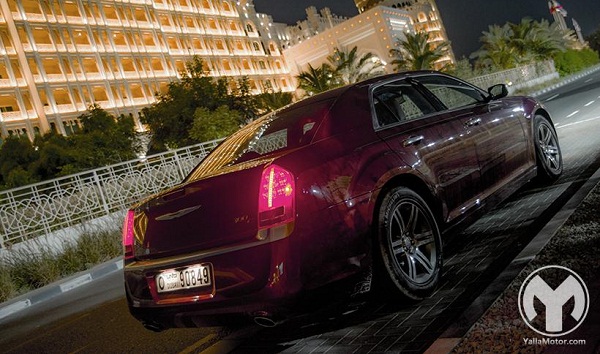 This car is huge. 5 metres long and 2 metres wide. This does draw attention to those who would be driving the Godzilla of cars.  The 300C is manufactured in Detroit, so is this the paradigm of Chrysler.  Big industrial city with a gang of wannabe rappers beat boxing on the streets; maybe this is why it’s so large and intimidating!  The 300C did make its fame through hip hop and rap music videos. It’s common to imagine a gold clad driver with the peak of his cap to one side, jeans around his thighs, boxers showing, shouting ‘Wassuup’ out of the window while Xzibit booms through the ICE. Though this is a common thought I see something else happening with this car.

Everybody will know someone who will glance at this car and say ‘Bentley’ or ‘Rolls’. I have certainly heard this and my wife has said it a few times.  Ok they are not car enthusiasts but they see this image.  Does this mean that Chrysler is in fact emulating that old 57 model and slowly evolving a car with luxury refinements but with more reference to the large premium cars that it wishes to get close too?  After all it does have some very similar features of the Bentley, Rolls and even the S-Class. 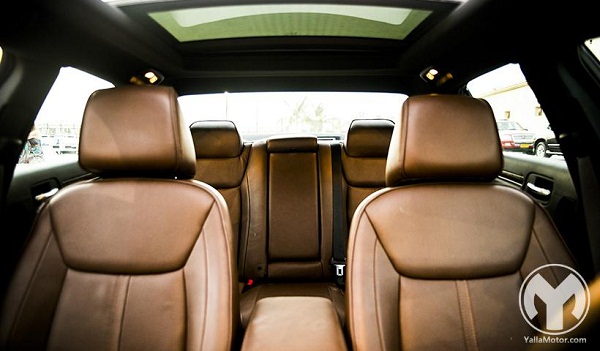 Chrysler has done a pretty good job on the interior. The quality is high.  The model I had was laden with some nice soft leather and unpolished dark wood veneer. 2004 to 2012 models had a sea of china toy maker plastic, which has all but disappeared.  There are a few small areas that feel a little less solid, such as the hinges on the centre console armrest, a small amount of flex in the dash panels when pushed, and the switches are not quite as solid feeling as, say a Mercedes.  The seating is a little hard on the back and quite wide but on the whole though, it still feels a nice place to be.  The most attention grabbing detail is the dials.  As the driver, these dials make you feel asking Mr. Jeeves if he has placed the straw picnic basket in the boot. These dials are probably the best dials I have ever seen. 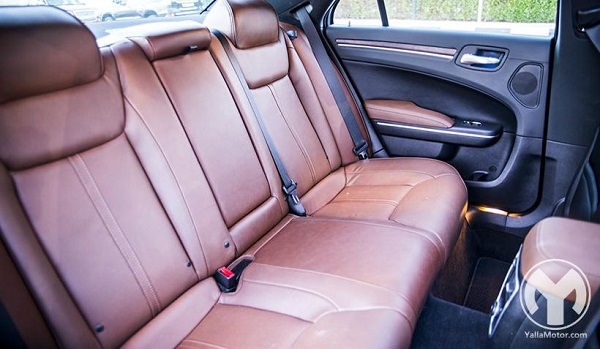 This is a car that you step into, not slide into.  Space is available to rent. Visibility is good though the mirrors are a little on the small size but that said if you're like me and have a license covering bikes to trucks, then this car is no issue to drive but for those getting into a car this size for the first time, it would probably take you a while to understand where each end of the car is. 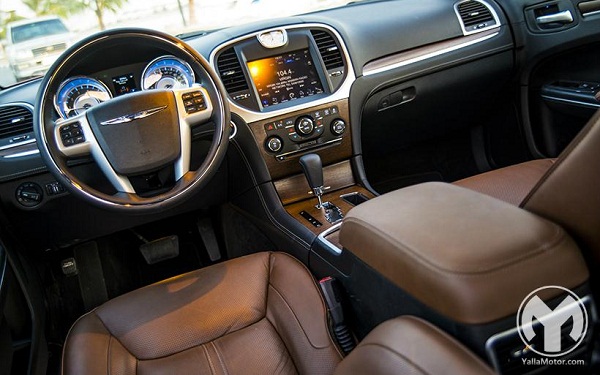 Technology on this car has been improved quite considerably.  Even since the 2012 model carrying the same interior, the quality and spec has been updated with quite obvious detail.  The first and obvious piece of technology is the Keyless Enter and Go system.  Without taking the key from your pocket or bag, walk up to the car, place your hand into the handle and the car will unlock.  Simply sit down, push the brake and push the start button. When leaving the car, press the engine stop, step out and close the door and press the small button on the handle, done.

12 way power, memory and vented seats ensure the driver gets the right position for comfort and drive. The seats and steering will move themselves to the last position of use automatically when starting the engine.  When turning the engine off, the seats will lower and move back while the steering will raise, making it easy to exit. Though not of much use here, the steering wheel and seats were heated also. Maybe it’s there should you get cold eating ice cream. 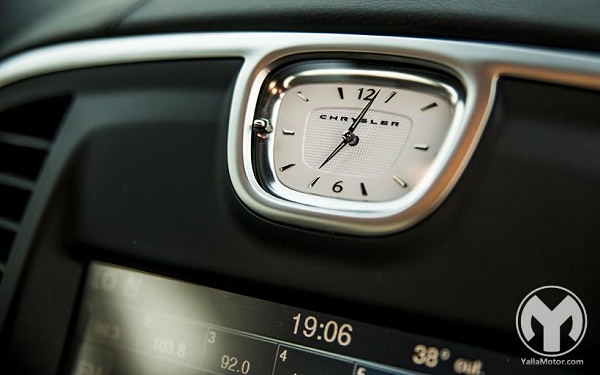 The 8.4 inch infotainment centre is one of the easier and most intuitive to use on the market. A touchscreen with Harmon Kardon Surround is a delight to the ears.  Its ‘U Connect” System features a Garmin navigation system that is so clear and obvious to use. The system will automatically recognise your phone, with your phonebook available through voice recognition.  All your favourite music can be streamed through the unit and should you wish too, you can connect through the Aux/USB socket that is neatly tucked away in the centre console or even the SD card slot that sits discreetly above the CD entrance.  The only downside is that it occasionally took around 5 minutes to connect to my phone. Basic controls for the function of the phone and the stereo can be found on the steering wheel along with paddle shift. The buttons on back side of the wheel are not so obvious to the feel though. They are very close to the paddles and you kinda feel for the cold metal of the paddles then lower your fingers to ensure that when wanting to adjust the stereo that you are not going to change gear.

One option on this car that I did like was the Adaptive Cruise Control. Fantastic piece of kit.  Set the cruise and at the same time you have a distance controlled function that will prevent you tailgating.  If every car in Dubai had this function, ‘WOW’ there would be a change on the roads.  Only place it was difficult to use was at a busy junction. So many people crossing your path can mean that you will struggle to get out and into the lane required.

Depending on the model that you buy there are as usual so many different options to choose from. From the colour of the interior, stereo upgrades to the wheels. As for the technology on the car well there is so much more to list and for this reason has been winning awards for safety.

In conjunction with the cruise control, the 300C has a Blind Spot Warning System.  Small orange triangles light up on the wing mirrors every time a car is sensed as being in your blind spot.  Should you activate the indicators to change lane and a car happens to be in your blind spot zone then an audible warning will sound to warn you of the danger.  Yet another system on the car warns you of sudden braking in front of you.

The car has had struts and beams thickened and or strengthened to reduce as much of the role as possible and airbags adorn all sides. They have even put an airbag in to protect your knees.

It would seem that in America many people get locked in the boot of the car.  At least if you watch the movies you’ll see this happens quite often.  It was quite entertaining to see that the boot has a glow in the dark handle showing a little stick man running from the boot of the car on it.  What was most entertaining about this is the driver of the car unless a little simple minded will know that the handle is there.

Traction control and stability control  are pretty much standard on all modern cars but I will go to say that this car can be a little twitchy at the back if to use the extent of the power this 5.7l pushes out, so traction control is a good thing to have if not used to rear wheel drive. This would be more relevant in the wet but Chrysler has a system for that.  They have a wet road braking system too. 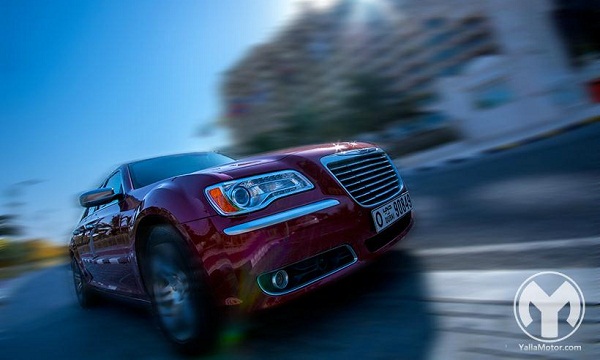 363 bhp on this 5.7 liter engine and it felt just right paired with the original 5 speed transmission. Smooth gear change and progressive acceleration was a delight.  Didn’t quite get a match on the 0-100 though. The book for this engine is 5.6 seconds and I think they must have taken out the seats, used a downhill road and Willie Carson in the driving seat. On a straight road and even with wheel spin at the start the best I could do was 7.3 seconds.

Chrysler has made some good improvements to the handling of this heavy weight but the truth of the matter is this; it does not like to go round corners at speed. It is heavy and the seats are made more for comfort than throwing Godzilla around. There is an SRT model for this. This car does handle well for the weight that it carries if kept in perspective, smooth power delivery from the engine, suspension firm enough to keep the poise on the road and dampen the bumps. If to be aggressive with the car it will simple get twitchy at the back and start biting your ankles. It is and so rightly should be a cruiser.

Braking was fantastic. Very slight steering control needed and I mean slight and the car came to a stop from 100-0 in 3.1 secs. Rather comforting really but then with all the safety additions to the car, it was expected.

The 300C surprised me.  This is a car that had quite a floored and sceptical consumer start in 2004. It was not completely thought out.  In 2012 they made some immense changes that turned this car around. Now they have improved on that tremendously with this 2014 model, styling fine-tuned and interior a nice and almost grand place to be.  It has lost the brash and intimidating feel that once was and definitely wants to cruise and show that anger management classes were successful. I like the car; my wife liked the car, other people would turn and look at the car. You want to put your trousers and shirt on and hang your jacket in the back. You feel that every valet guy is flipping a coin to try and park the car for you.  Chrysler I believe are doing what they should have done in 2004, they are challenging the premium international car market with a little Avant-Garde while keeping that affordable price tag.