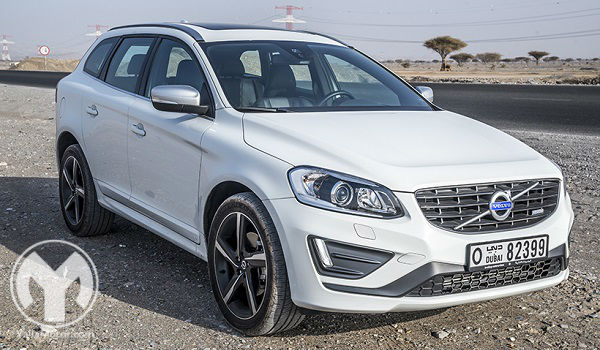 Its Swedish, its quick and you’ll want to drive one.  Sorry no, not the Koenigsegg.  It is in fact your favourite Swedish brand Volvo.  Ok stop there those already stereotyping the Volvo driver, especially you Westerners.  The mature grumpy country types that like to sit in the overtaking lane and drive slowly at the weekend are taking a back seat. Volvo has made great changes in their brand in the last ten years, deleting the once frumpy, boxy image and putting the practicality and safety into modern sporty and appealing cars that more than challenge the competition, while at the same time also putting a smile on any mature grumpy types.

This R-Design guise XC60 is enthusiastically trying to take on the likes of BMW’s M department or Merc’s  AMG and you can certainly see this. With this in mind I take this car for its own challenge, to test its eligibility amongst the SUV’s on the market.  I take it into the mountains and push it through roads more suitable to an Italian with a herd of Cavalino’s under the bodywork. 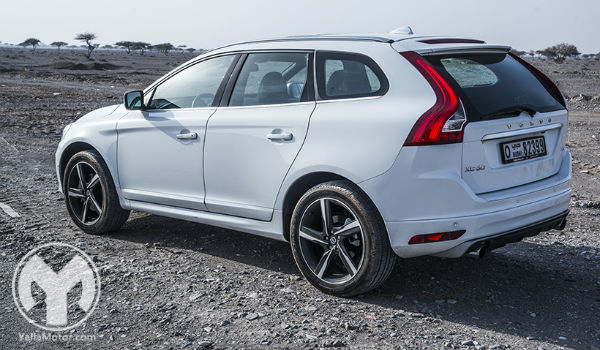 This car is Swedish and with most Scandinavian products they keep things smooth and minimalistic. The body, I feel sits between BMW X3 and Range Rover Evoque.  The BMW has a harder, more robust look to it while the Mini Rangy is smooth and curvy.  If to think back to Volvo’s roots when 300 Series were polluting roads and raising the optician bills from cracking lenses caused by its ugly looks, Volvo have come leaps and bounds. I would actually say they are getting ahead of themselves.  They draw style from across the Volvo range, add a little Gym time, give it a shower and hey presto you have this smooth, sleek collection of vehicles. 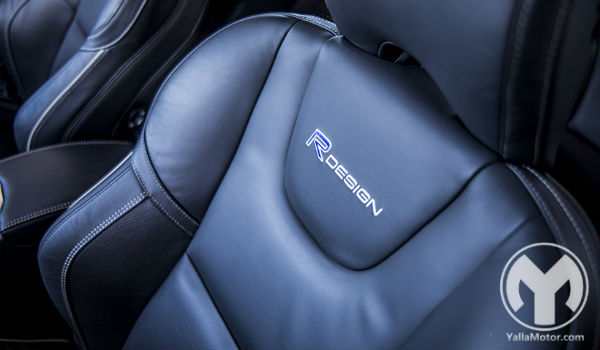 Volvo has spared no expense on the materials within. The quality of materials is on par with all the premium models, just set out that little bit differently. The trademark floating centre console still resides with pride in the brand and still has the modern edge. Titanium coloured touches decorate the door cards and the dash, keeping some masculinity against the subtle smooth feminine lines of the dash and centre console in general.  Seating is fantastic. Volvo makes some of the most comfortable seats on the market. Leather wrapped and extremely supportive, the R-Design seats are adorned with the R-Design logo as well. 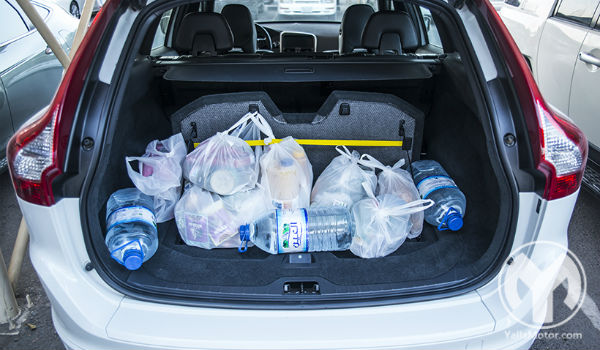 The XC60 is one of those cars that has plenty of space but does not feel like a big car. You feel more like your sitting in a roomy hot hatch than an SUV. Legroom in the front and the back is comfortable but would say that those around 6 feet may start to see the uncomfortable side in the rear due to a reduced amount of headroom. The boot / trunk of the car is rather large. Approx. 490 litres, it will hold the family shopping and hold it well. For those golfers out there, yes you can get the clubs in too. 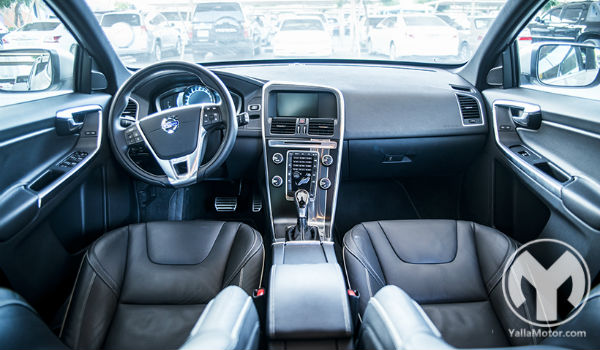 Techno is everywhere in this car, well in some cases as long as you pay for the option packs. Volvo quite honestly has been watching a lot of Star Trek. You almost open the car like it’s the long awaited gift under the Christmas tree.  After sliding into that soft supportive memory powered and heated seats (optional extra) you put the little black box into the dash, the TFT tacho lights up and reminds you that you are about to drive an R-Design. The centre 7 inch integrated colour screen tells you you’re in a Volvo and initiates itself ready to entertain you with its 8 speakers surround.  The system is integrated with an optional reversing camera and to stop you driving with phones in hand it has an on-board Bluetooth connection with steering wheels controls, allowing for safe two handed control of the car. USB and Aux sockets are neatly placed away in the centre console armrest. Dual climate control works well and the fan noise is quiet.  As with any premium car there is an options list as long as your arm and Volvo are no different. Navigation, front parking sensors, rear entertainment system, corning headlights (fitted to this car), and so on. 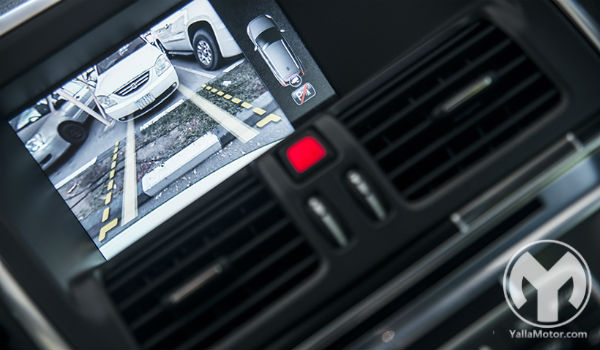 This is a Volvo and Volvo will always want to be the best at this. Yes many people on the planet think that a Volvo is the safest car on the planet and yes its class leading but the truth is it keeps in touch with safety and techno as much as any premium car make. They all have their patented extras. Volvo has the rear centre foldable child seat.  It was introduced in the Volvo 850 in the mid 90’s and still finds its place in the modern car. They also have a new integrated turbo and manifold system combining improved direct injection with higher combustion control. Along with these Volvo has pretty much the same as the rival makers. ABS (Anti-Lock Braking) with EBA (Emergency Brake Assist), an advanced stability control, driver and passenger airbags, side impact protection system, CITY SAFETY collision avoidance technology, DSTC (dynamic Stability Traction Control) and ISOFIX for fitting the child seats. 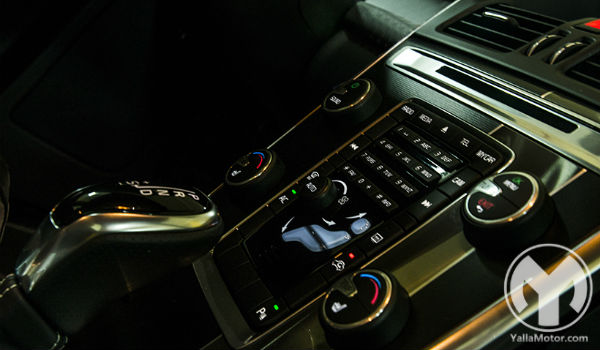 The Volvo XC60 carries a new 4 cylinder 2.0l turbocharged engine from Ford coupled with a 6 speed powershift dual clutch gearbox. The engine pushes out 240 horses with a torque of 320Nm. The book 0-100 is 7.6 seconds; however I struggled to get below 9.11 secs. 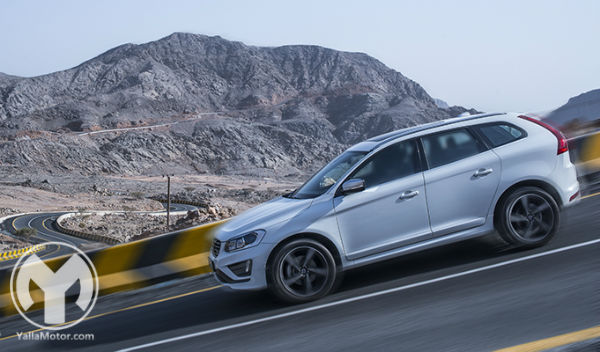 Ok here we go…I have made my way to the top of the northern emirates to sample some roads that as noted earlier will suit charging Cavalino’s. After slowly enjoying the twists to the top understanding the road and its hazards I prepare to check the handling of this R-Design.  I place the car into Semi auto and get under way.

The car immediately does not have the singing engine like that of the Italians, more a throaty note. Having engaged the semi auto, you feel the need for a paddle shift due to the nature of the turns. First few bends were slow to get the feel of the car but feel  it I didn’t. A small amount of role or chassis twist was evident and the steering had no feel for the road. It felt like sitting on your hand for 20 minutes then trying to drive. The car was adorned with 20 inch alloy Ixion wheels that looked like a Chinese star from the Blade films, however I could not help but feel that if to have Standard 18’s or lower, then the ride would have been so much more woolly. The suspension needs to be more firm and the anti-role bars in the car stiffer. Accelerating off the bends seemed to be an effort for the car. Not due to power, no this department was great but as the car came out of the role and you push the gas to the floor from the apex, the wheels would spin just slightly due to the presence of torque steer.  As things picked up the car just got worse. I was driving at the point the car was thinking of drifting wide. Bearing in mind this is front wheel drive and the drift will be predominantly front end first, the XC60 was not installing any confidence that if to take things a little aggressive it will actually keep you on the road.

It took twenty minutes from top to bottom of the mountain and although I enjoyed the roads immensely, I understood that while the car had the muscle to push it, the car itself was not matched with the power and wanted to cruise. It highlights that the XC60 is more comfortable in the city.

The braking was extremely good; though it slides a little in and out of the ABS, it stopped from 100-0 in 2.57 seconds.

This is not the Volvo of years past. They have always kept safety and strong build in the cars; however they are now building well-designed modern cars that easily take a rightful place among the premium brands and sell to all ages. The XC60 R-Design specifically is a sporty SUV for the family; ready to cruise the highways and cities in comfort and style over fighting the corners. It has a sudden energy that keeps the car nimble in the streets and traffic and will infuse sporty even into the older generations. Against its rivals BMW X3, VW Tiguan and Range Rover Evoque I would place this third in line, the Range Rover being top, then the BMW. The styling in my opinion is better that the two Germans. While the Volvo suffers in the drive, the Rangy and the BMW are more composed on the road while the VW offers such hard suspension compared. The XC60 is not to be missed when looking for a premium SUV.