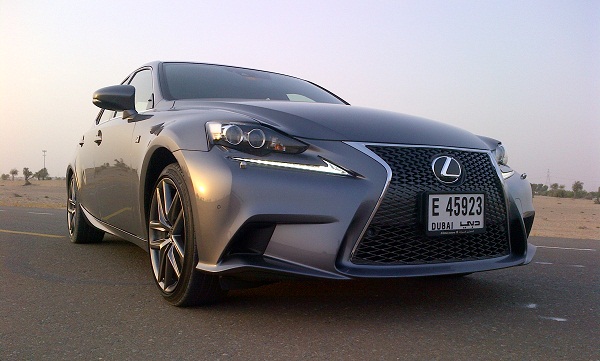 While most sane people of the Middle East relax with their families in Ramadan weekends, the insane people at YallaMotor.com spend their weekend driving all over UAE testing cars. We won't have it any other way. This is absolutely the best gig in town. This weekend, I got my hands on the all new Lexus IS 350 F-Sport. Indeed, the IS model has come a long way since it's global introduction 15 years ago. The 2014 Lexus IS is the third generation model, building on it's legacy of offering luxury performance cars at an entry level segment. This is a more powerful car compared to the previous IS 300. The engine now comes mated to a new 8 speed automatic transmission, increasing power to 312 hp compared to 230 hp of the previous generation. Compared to rivals Audi A4 and BMW 3 Series, this is also a more stylish car, both from the inside as well as outside, particularly with the F-Sport body kit as shown above. My question as I picked up the car was: "Is this a sports car with a Lexus finish, or a Lexus luxury car with a sporty finish?" 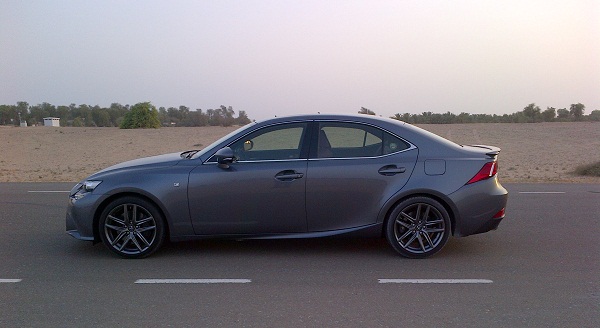 In terms of style, there are lots of positives and a few negatives to report. First off, we love the "swoop" line starting from the bottom all the way to the rear door. The wheel arches are bolder, the window lines are sharp, creating an overall luxurious but muscular look which is exactly how it should be. The disadvantage is related to practicality. Ground clearance is very low due to the new design and the bottom area is susceptible to curbside scratches should the car veer into gravel areas. The F-Sport badge is subtle which is a relief. 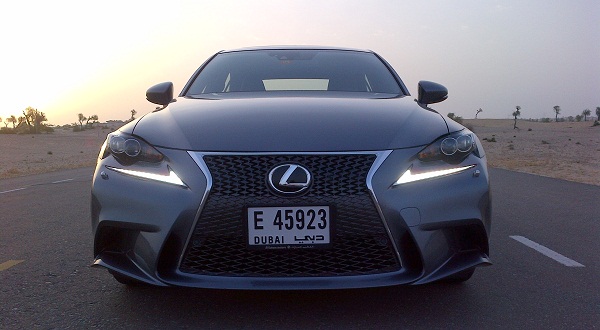 The most obvious style update has been the "spindle grille" which has been received well in the market. Is it a good idea to have it on all the Lexus models? I think so, because it is now a signature grille for the brand. Look at any Jaguar and the honeycomb grille is it's signature. Similarly, Lexus needed a signature and finally has created one. The front corner pockets look athletic and very impressive. Again, due to low ground clearance, the lower parts of the bumper are likely to face potential scratches so the owner will have to be extra careful. All versions of the IS350 come with impressive 18" alloy wheels. The dual pane moonroof is another great addition, adding a sense of extra space and ambience to the interior environment. 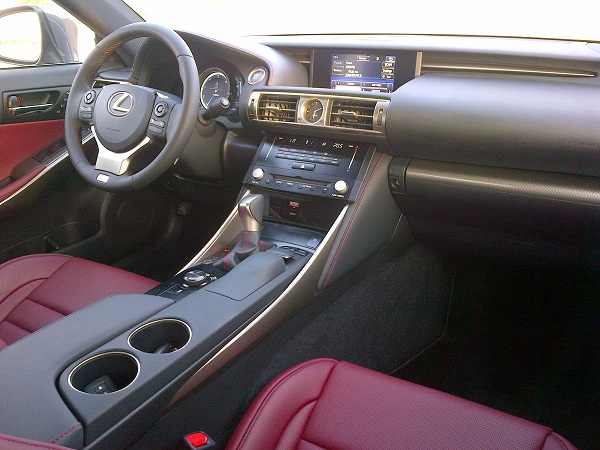 Step inside and you feel it's Christmas in leather. Smooth, sport red leather seats, high grade material, high quality stich make their presence felt in the top spec F-Sport Prestige. The lower spec Premier version comes with fabric and synthetic leather seats. In all versions the seats come ventilated which is good considering our climate. Two huge cupholders and a large storage unit in the middle alleviate any major issues with interior practicality. The goose hinged dashboard is creative but does little to add any real volume. You can barely fit a couple of note books and then you're forced to remind yourself it's time to start putting things down on an iPad! 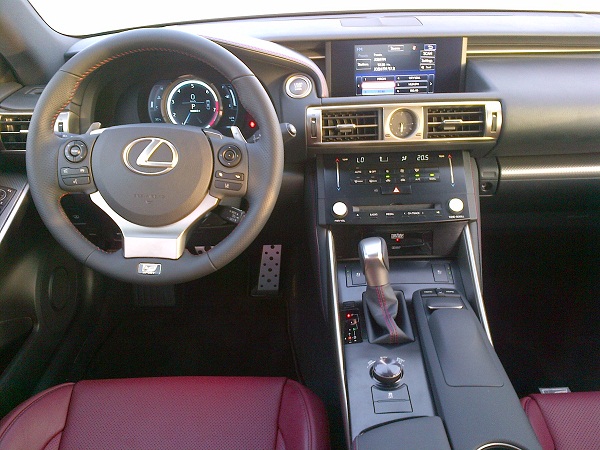 The steering and gear knob are encased with GTI style leather. The push start button is handsomely placed towards the upper right corner. Also, the digital tachometer is exactly the same as LFA, only at a fraction of the cost! However the best part is the central console.  It is probably one of the few consoles I've seen that combine luxury and sportiness rather well. Alongside the Mark Levinson sound system you have a remote touch button, similar to a computer mouse that allows you to navigate the 7 inch infotainment screen. Very user friendly and ergonomic.

What I fail to understand are the A/C vents and the analog clock. The entire unit encasing the two items are a throwback to olden, golden times that just don't fit well with the sporty F-Sport. The A/C vents remind you of an outdated Toyota Corolla and the analog clock reminds you of executive Jaguar models for old men. Look around the interior and these two items are the odd ones out. It's like showing up at a beach party wearing a three piece suit. Weird. 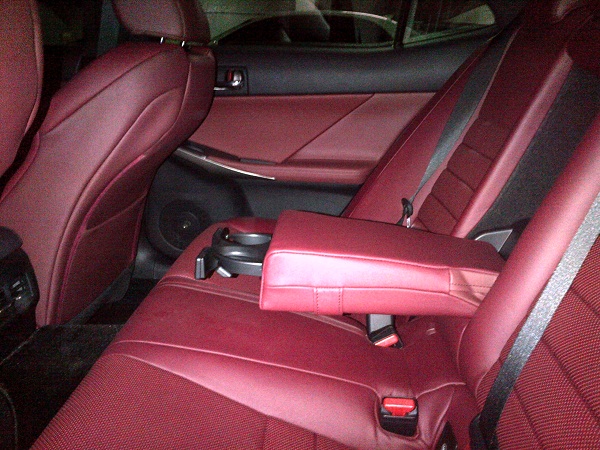 Rear seats are plush with cupholders included. More important are rear A/C vents (though without any controls). Rear leg room is indeed cramped. 3 people can comfortably sit at the back, for short rides. On long drives the rear leg room will trouble passengers. 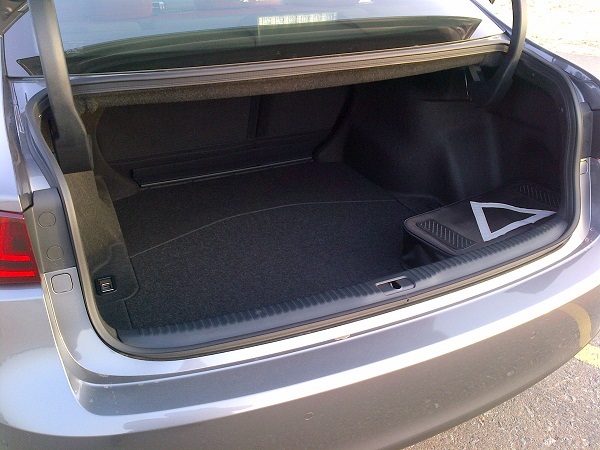 Boot space is not best in class but to be fair, the target audience will not really require spacious boots. This is smaller than a Camry but will suffice for daily requirements. My twin stroller will not fit in this boot, which is a bummer.

Safety features stand out, particularly the Lane Departure Warning system which makes a beeping noise when you change lanes without using the indicator. If you're using the indicator it will stay silent since it detected it's being done on purpose. This is great, as a recent report from Dubai Police indicated most traffic accidents happen during unnoticed lane changes. This feature is only available in the top spec version of the F-Sport, the F-Sport Prestige, not in the lower Premier version. Also included are front, knee, side and curtain airbags on all versions. Furthermore, a back monitor camera and mainstays like ABS and EBD wrap up an impressive safety lineup. 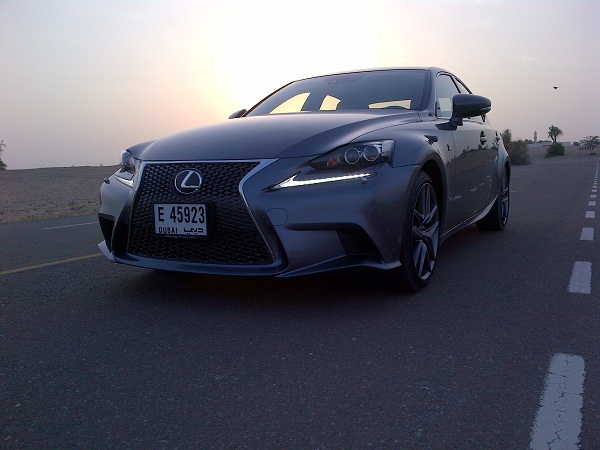 When it comes to driving, the Lexus IS350 F-Sport feels essentially like a luxury cruiser with a sporty touch. 0 - 100 acceleration is 6.0 seconds, which is way better than Toyota Avalon at just under 7 seconds. It takes a second or two to get the torque kicking in but once it does, there is no looking back. There are three drive modes, Eco, Normal and Sport. Switch between them and the Sport mode will give you effortless acceleration. The torque kicks in much faster in Sport mode and it keeps going. We accelerated it to speeds of upto 160 km / h and it was seamless. The car stays stable at high speeds, thanks to Vehicle Stability Control system and good road grip. Moreover, the engine sound is quite pleasing to the ear, thanks to newly installed "intake noise generator" in this model. However it drinks up your petrol and we could literally see the gas meter going down as we used the Sport mode. In Normal and Eco mode, the car becomes just another luxury cruiser. While we're on the subject, what good is a luxury cruiser without adaptive cruise control? Even Hyundai Genesis has adaptive cruise control! Time to upgrade, Lexus.

The electric power steering is not very light, which is good because then we really pushed it in hard corners without having to think twice. However, once we did, it was an eye-opener. Try doing a sharp L-turn in the F-Sport, or a sharp corner in a small roundabout. It's almost impossible. It screams understeer. We expected much better from Lexus. The brakes are a strong point though, with 100 - 0 braking time of less than 4 seconds, commendable. The best part, though is the suspension. The Adaptive Variable Suspension works best in Sport mode and you get decent feedback in Normal mode as well. Good job.

To sum it up, the F-Sport makes the IS 350 a lot more fun to be in. Definitely gives Jaguar XF a run for the money. It is ridiculously priced over 200,000 AED, it is in the same bracket as BMW 3 Series Sedan. Yes, there are features that make the F-Sport a good place to be in, but it still is not in the same league as BMW. The brand prestige, the torque laden 3 Series all give it an edge over the IS350 F-Sport. So is the F-Sport a comparable alternative to the BMW 3 Series or the Audi A4? No, it's a good stopover destination before you make that leap to the big leagues.