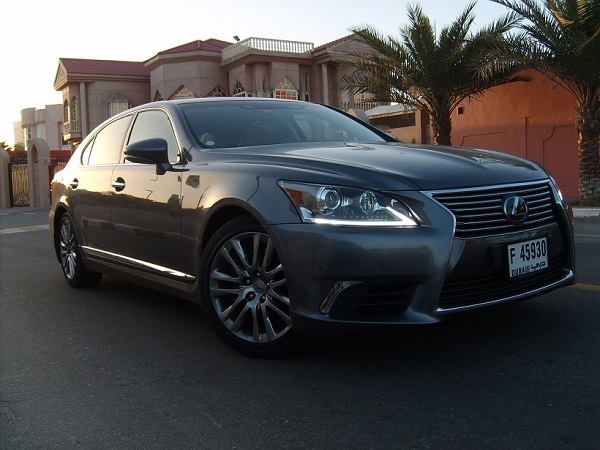 The previous iteration of the Lexus LS460 was condemned for being too forgettable. The exterior was lacking visual appeal and the ride had no real dynamic abilities.

So for 2013, Lexus has rolled out the LS460L with an aggressive F-sport kit. What this means is the car now has the new Lexus corporate face with its pinched grille and the ability to switch suspension modes to Sport and Sport+. Sounds exciting, doesn’t it?

The truth is a bit different though, but it’s not all bad.

When you walk up to the Lexus, the first thing you notice are its dimensions. There is just no running away from the fact that this is a long car – that ‘L’ suffixed to its name adds an additional 30 cms to its length to improve rear legroom. The car looks markedly better than its predecessor, having a more aggressive and assertive stance, in no small part thanks to the F-Sport body kit which adds a more aggressive front bumper. It definitely buys you some new found street-cred, especially when compared to the previous generation which looked a bit dowdy. The new model also features the now customary daytime running lights in an ‘L’ fashion (looking almost like a Nike logo) but which is integrated into the headlights very neatly (as opposed to Infiniti’s today which tack daytime running lights onto the bumper like some aftermarket product installed in Deira).

My only real gripe with the exterior is that the wheels look like they are quite recessed in their wheel arches and it gives a slight impression of a Camry stance. That is definitely not a good thing. A set of 10mm spacers on all four corners would not go amiss. The much lauded BBS rims get lost, and personally, they don’t seem to be the best pair of boots for such a large car.

On the whole, the new car is more distinctive and handsome. However, it still lacks a certain ‘WOW’ factor. Potential owners are going to be accomplished people and one would assume that an owner would like his car to make a statement. If you want to be non-descript, buy a van! In a line up against its competitors from Mercedes, BMW, Audi and Jaguar, the Lexus is the least visually stimulating. 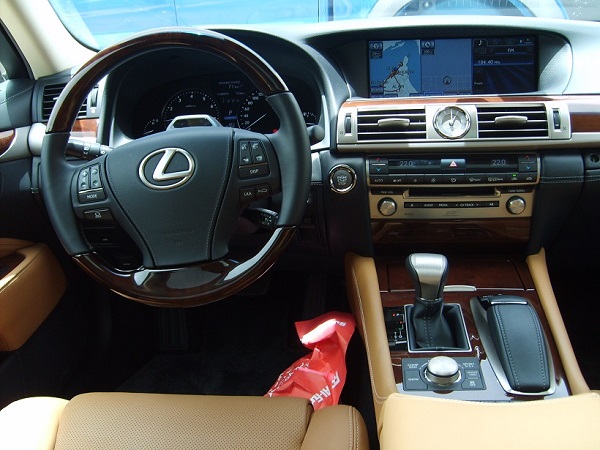 To me, there is just one word that comes to mind each time I get into this car. Exquisite. Lexus may have spent a fair amount of time updating the outside of the car, but the real changes are to the interior. Materials are top notch, but what stands out most is the combination of colours used. All surfaces in the car are covered in stitched leather and the black leather dash tops are offset against caramel coloured leather on the seats. These two sections are bisected by a gorgeous xx wood finish interspersed with an aluminium finish. Throw in the lush carpets and it makes for an extremely attractive interior and feels like it would be comfortable competing against even a Bentley.

The rear seats are where the veritable party is. The right rear passenger is treated to a full Ottoman style seating arrangement with various massage settings. The seat reclines and a leg rest rises from below to allow for a seating position that could rival business class seats in certain airlines. The passenger on the left has to make do with only a basic massage function and just the back rest reclining a few degrees. All 4 seats are heated and cooled though. However, within our region, there is an emphasis on driving one’s self rather than being driven about. And the lack of any massage function in the front seats does seem like a bit of an omission. With some rivals providing this function, it does not bode well for the Lexus.

The instrument binnacle is a bit fussy. There is a lot of information displayed in front of the driver and at first, it’s almost overwhelming. However with time, one does acclimatise to this. The dials are quite steeply raked back into the dash and this does make it quite odd to read if, like me, you are 6 feet tall and recline your seat a bit while driving. The 12 inch screen on the centre console is the centre piece of the attraction though. The screen is used for various settings such as navigation, the entertainment system, vehicle settings and much more. It is operated by a little joystick (quite sensitive but again, something that you tend to get used to) and is actually quite intuitive to use. It does with minimal buttons and while this does simplify matters, it would be nice to have a ‘Back’ button as opposed to having to scroll to a corner of the screen to go back to a previous view.

If you want a list of the options on this car, you’re going to have to visit the showroom. Else this review will turn into a thesis very quickly. Some notable functions (aside from those mentioned above) that I did use regularly were the blind spot indicators (a visual warning in the side mirrors of anything in the car’s blind spot), the radar guided cruise control (which adjusts your speed automatically to the car in front of you) and the lane change assist (which provides an audible signal if you should stray across a lane with your indicator on and even gives a slight tug to the steering wheel to alert you). Most noteworthy though was the Mark Levinson sound system. Enough to say that I was actually afraid that I’d blow out the car’s windows before the speakers gave in.

My biggest disappointment with the interiors though was the lack of any mood lighting or ambient lighting. At night, aside from the buttons and dials lit up, there was no other glow around the car. In fact, it led to another disappointment as the lighting from inside the glove compartment could be seen seeping through. Not a pleasant touch on my AED 495,000 car. Ambient lighting is a standard feature on most new cars today (even the VW Golf GTi has red ambient lighting) and its absence was a massive blow to me. It’s a small touch but one that has a huge impact to the perceived quality of a product. Lexus, you need to get on this ASAP.

These small shortcomings on the inside lead to a notion that the LS460L is a big Avalon or a lengthened GS350. There are too few distinct touches to mark this car out (as good as it is) as a flagship.

In Disney’s classic, Aladdin swoops Jasmine away on a magic carpet ride. In 2013, I have understood what that must have felt like. The Lexus is not a car. It’s a culinary delight.

The engine runs on liquid chocolate, the transmission is made of soufflé, the suspension from marshmallows, the steering of custard and the interiors are covered in liquorice and caramel.

In my opinion, a luxury car should be able to detach one from the entire experience of driving. It should deliver a person over any given distance in utter comfort. There should be no exhilaration or exertion, rather a complete detraction from the entire chore of driving. Having all of it done for you. That’s luxury. And this is where the Lexus delivers!

Forget about those aggressive bumpers in the front. If you want me to use phrases such as “steering feel” and “cornering Gs”, then you’re definitely reading the wrong review. The LS460L has extremely light steering which makes manoeuvring the car around a doddle (sensors and reverse cameras are a given these days). The suspension soaks up almost every bump in the road and leaves you with a cushioned ride. This does not allow for any quick cornering moves but that really isn’t what this car or this segment is about, is it? The brakes are strong, though the pedal is really soft and modulating it becomes a little tricky and requires acclimatisation.

Wind noise? Tyre roar? Lexus doesn’t have these words in its dictionary! The interiors are left in absolute silence even at highway speeds and beyond. The Lexus is definitely one of the most relaxing ways to go about.

Still fancy a bit or corner carving? Fine then…Lexus allows you to choose a Sport + setting which apparently alters the suspension and damping. In all honesty though, it doesn’t do much. The ride is still quite plush but it does reduce roll through the corners (though you’ll still be clinging onto the central glove compartment for dear life).

There is a tiny little feature here that I found more grating than something that adds pleasure. In ‘Eco’ or ‘Comfort’ modes, there are two tiny blue lights near the speedometer which throw a bit of a glow just beside their source. In either of the ‘Sport’ modes, this turns red. Now, competitors like the Jaguar incorporate the same feature but in the case of the Brit, the entire dash glows whereas here, its two tiny little spotlights. Seems a little half-hearted.

The Lexus averaged 13-14L/100kms over mixed driving. The ‘Eco’ driving mode limits the engine to staying within its most efficient band but it makes the accelerator pedal feel soggy; personally, I prefer to decide how efficiently I want to use my engine based by modulating the weight of my right foot. A bit gimmicky for a car in this segment? I guess it would be a matter of opinion.

What is the most comfortable way to get from point A to point B? The Lexus is definitely in with a shot here. I could literally feel my pulse rate drop each time I got in. And with the same equipment levels, it undercuts most, if not all, its rivals.

However, the extra money you spend on any of the rivals may not buy you a lot more car, but it will buy you a lot more perceived luxury. The trump card held by the others in this segment is the ability to nail the finishing touches on the head.

Distinctive visual appeal, internet connectivity, driving dynamics, heritage, technological advancements – each rival has an area where it excels and the same just cannot be said for the Lexus.

The LS460L is great value for its money and you could not make a smarter buy. There is a distinct integrity about its build quality that leaves you with a sense that it’ll be running just as smoothly 20 years from now. However, despite the appeal of its price tag, it cannot hold the kudos of being a segment leader. Not even close. One only needs to take a quick glance at the upcoming 2014 Mercedes S-class to know the benchmark set in this category. It will definitely be markedly more expensive, but you will be able to see where every last penny has been spent!