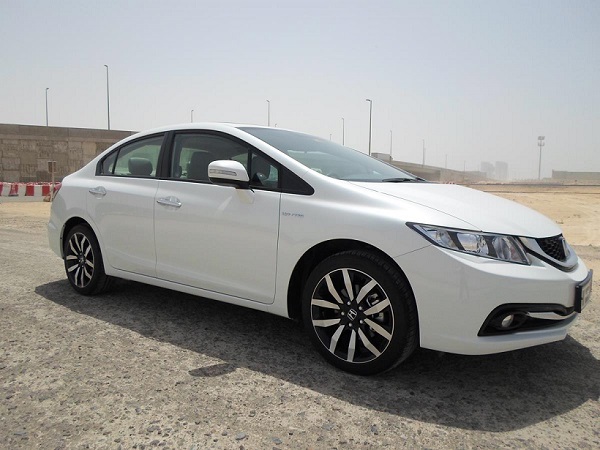 Honda has been producing compact and practical cars under the Civic name plate for over 40 years now. We had just got hold of the ninth-generation 2013 Civic which has been completely redesigned from the previous year model and it was time to see what made this car so special. Our test car came with a white orchid pearl paint job and wore a set of stunning 17” wheels which were wrapped in some very nice Michelin Sport rubber. Chrome seems to have been the recipe Honda have adopted for the 2013 Civic with it being found on door handles, the boot lid, along the honeycomb  grille and the front bumper. 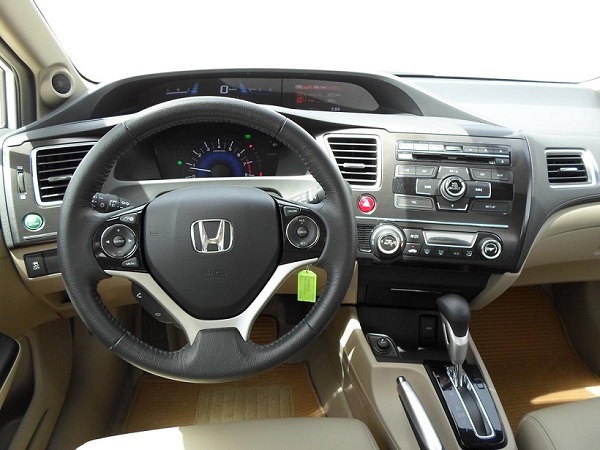 Once you’re inside, the first thing you’ll notice is how comfortable the soft leather seats are. After you’ve adjusted your seat, the steering offers tilt as well as telescopic adjustment to ensure you have the perfect driving position. The 2013 Civic continues the tradition of a two-tier dashboard and quite frankly this makes the car feel very roomy from the driver’s seat. The driver benefits from a digital speed-o-meter, which lights up green to show when they are driving economically, and a multi-information display that notifies them of average fuel economy and the like. The dashboard has been redesigned as well and now comes with a brushed metallic finish and some extra bits of chrome. On the downside, there still seems to be way too much hard plastic in the cabin compared to its rivals. Rear passengers are likely to complain of lack of headroom and rear A/C vents which isn’t the case with the Nissan Sentra. The boot, which is capable of swallowing up 400 litres of cargo, is also a lot smaller than the Sentra that manages to squeeze in an impressive 510 litres of boot space. The boot is also much smaller than the Peugeot 301 which boasts cargo space of 640 liters. Also, compared to Nissan Sunny, Nissan Sentra and Peugeot 301, the rear leg room pales in comparison. The Sentra has class leading 950mm leg room, while Peugeot 301 is the closest match at 801mm.

The 1.8 litre i-VTEC engine that our test car was equipped with churned out 139 horsepower and 173 Nm of torque. This meant you could complete a 0 – 100 km/h run in a reasonable 10.4 seconds. Though this car wasn’t made to be driven very fast, it’s good to know that the brakes on the Civic are very, very good! Even though all-round visibility is already good, the slim A-Pillars combined with the extended front windows provide excellent visibility even during turns. Although all models come fitted with an ECON mode that improves fuel economy by adjusting the engine and air conditioning, after driving over 400 kilometers in a variety of situations, my average fuel economy read a very high 9.0 litres / 100 kilometers. The best explanation I could come up for that would be even though its fuel efficient at a constant speed, when it comes to overtaking, the Civic has to be pushed really hard and that’s probably where it loses its ECO touch. I also found the reverse camera screen much too small to be of any help and the lack of parking sensors didn’t make matters any easier. Although the Civic boasts a top speed of 205 km/h, due to the lightweight body, at anything over 120km/h, you really feel yourself working to keep it in one lane. I also happened to notice a small glitch in the system; while doing anything over 115km/h, the small yellow light that indicates you are doing 120 km/h began flashing – not a very pleasant sight when cruising along the highway.

All in all then, even though the Civic lacked rear A/C vents and doesn’t offer a whole lot of headroom, it is a fun to drive and easy to live with small family sedan.