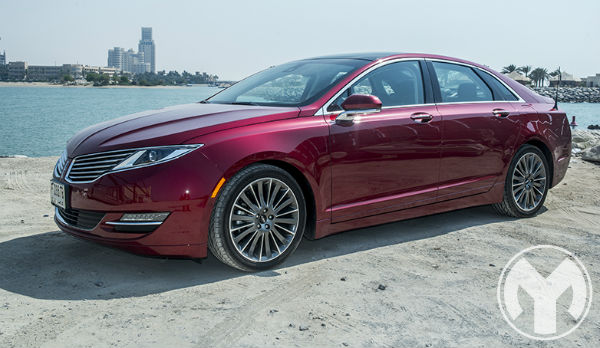 Lincoln, the luxury brand of Ford Motor Company since 1922 is regarded in history for producing cars with glamour and panache. Lincoln has also had its fair share of ups and downs like most car companies and has consistently gone through reinventions over the years.

They have constantly tried to break the ice among car design. For example, the good guys at Lincoln have made a bold move by creating the Lincoln Design Studio. What they have done is redefine convention and remove heritage from its conceptual thinking. I got an opportunity to test drive one of their success stories. Here are my thoughts after conducting a road test review for 2014 Lincoln MKZ: 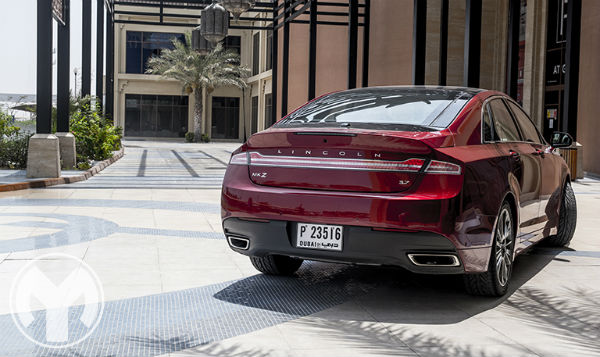 You cannot ignore that Lincoln is a product of the Ford brand. This MKZ for example has the underpinning from Ford Fusion and you will note Swedish elements in the design. That said, with these elements or not, the design is fresh, elegant and attractive. The red color on our test car certainly befits the car and enhances the elegance and shape. With many car manufacturers, the 'wings' symbology seem to be a common element. Bentley, Aston Martin and Chrysler all have wings in their logos. The MKZ has its wings in the grill. Some may call it a moustache but I think Lincoln shows their wings in a stylish and attractive looking grill. 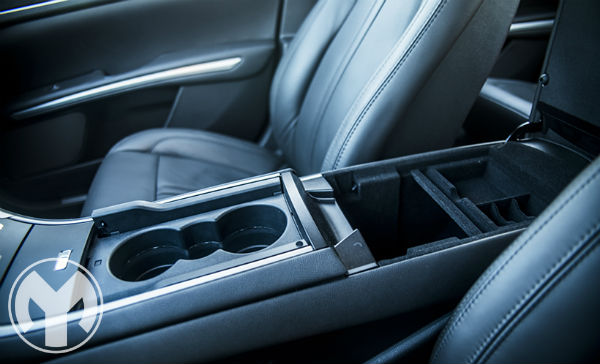 As soon as I sat in this car, I had a thought that somebody in Lincoln Design Studio had a thing for reptiles and ancient history. I could see shapes and elements of cobras and Persian swords all through the interior of the car. To start with, the centre console sweeps from the back of the front seats and gently lurches forward like the back of a cobra. You can just imagine a snake charmer sitting on the bonnet hypnotising it! The steering wheel looks like the back of a reared cobra’s head and the dial surround again has the outline profile of a cobra facing you. The Persian swords you can see elegantly lining the dashboard and the tops of the door cards in line with the handles.

The shapes I see show my imagination at work but this the intention of the Design Studio. My point is the interior is interesting and so much so that you feel this to be an adventurous place to be. It’s not like many cars where you struggle to see past the buttons and lines, this actually kept my imagination working and interested.

Elements of Volvo’s floating centre console are obvious and the design team has taken a step further by bridging the lower section of the console. Easier to do without the auto gear shift that now resides as buttons on the side of the entertainment screen.

Overall though they have used some cheaper leather that in places feels a little faux and the plastics are a little thin in places too.  Buttons and switches don’t have that solid feeling of the BMW’s or Merc’s and the stalks flex under use. The stalks maybe a little too close to the paddle shift, especially if you have chunky fingers. I found that the back of my slim fingers would occasionally brush the stalks while using the paddle shift. 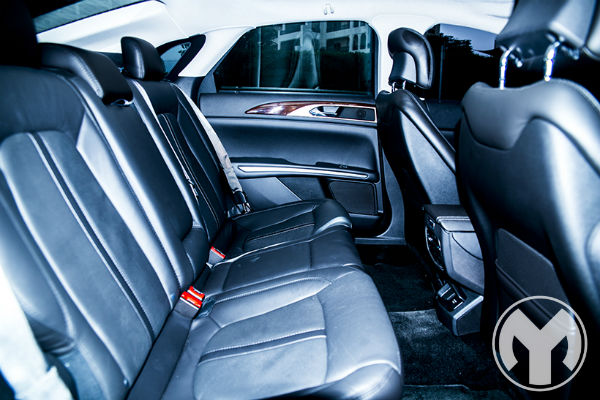 The car makes you feel important as you approach and step inside.  As you sit inside, the seat adjusts to your position and the steering does the same. The multimedia screen in the centre console displays elegantly that you are in a Lincoln. Now, I am a slim chap and I felt snug in the seats, not claustrophobic but snug. The seats will feel a tad narrow to anyone a little fuller in figure.

You feel safe in the car, comfortable and reassured by the amount of safety features that embellish the MKZ. Visibility is on average the same as most mid sedans. A little bit of a blind spot and the side mirrors show objects a little distant but you do have a blind spot system to cover this. Rear window again average given its trunk sits high in the mirror but if to activate the world’s largest moonroof the rear view becomes more like that of a two seater sports car.

Rear seats are again slightly snug in feeling but not so comfortable for the taller people due to the lower roof line. The leg space is ample less of course you have a 6 footer sitting in front of you.

Space in the boot is a little constricted so you might need to drop the seats at times. There is an arched frame that automatically reduces the available space. 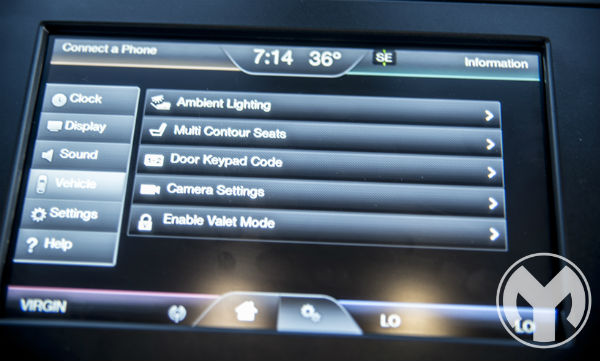 There are so many features it's almost impossible to fit them all here. The MKZ comes with three techno levels, MKZ 14, 24 or 34, the higher the number the greater level of techno in the car. Suffice to say that I had the 34 and this car was loaded so I will break this down a little. Keyless entry system, with a security coding system should you wish to use it. Active Noise Control, full LCD instrumentation and THX digital surround sound. The surround system has fourteen speakers hidden around the car but not sure from the clarity of the system whether in this car they are perfectly necessary. Ten way powered memory seats that will cool and or heat and if you press the right buttons an invisible Thai masseuse gives a quite pleasant but at the same time slightly weird massage. Weird I think because your mind is driving. My wife seemed to like it.

One part of the dashboard that I was a little unsure about are the touch panel controls. There are no switches on the dash - it’s all touch. I feel a bit unsure due to the fact you have to look down to operate some of the touch switches, surely eyes need to be on the road. Furthermore, the touchscreen on the entertainment system is set just under the windscreen and at a perfect angle for the sun to create a glare across it. In other words, during most of the day you’ll struggle to see the screen. 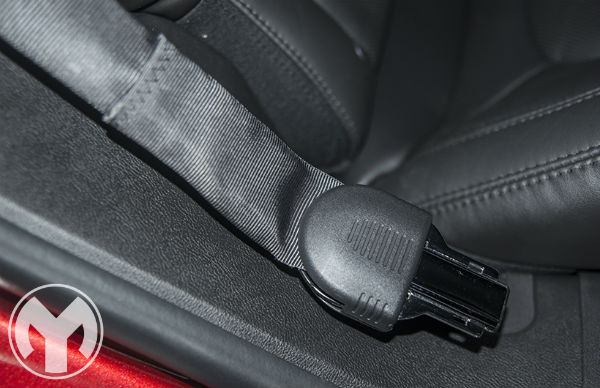 This car can almost drive itself. It just shows how much further down the road of auto technology we have come. On a clear highway I set the Adaptive Cruise Control which also keeps a safe distance from the vehicle in front. It’s a function that I have highlighted before; I like it and think every car in Dubai should be fitted with it. It’s a great piece of kit. I then switched on the Lane Keeping System that will help ensure that the car stays between the lines on the highway. Now this does not mean switch on and take a nap, it does mean that yes the car will do its best to keep you on track and warn you when it thinks you need to stop, so keep those hands on the wheel, however it is possible to remove your feet and hands from the wheel and if the road is straight, it will follow. Amazing. Warning remarks and sounds come from the car if the car senses the white lines more than twice. All you commuter types out there may like to get a test drive for yourself.

The MKZ is fitted with all the standard and expected modern techno of cars nowadays but has a few extras that are not yet standard. Rear passengers get inflatable seat belts. The driver has an SOS crash warning system and an extra airbag for the knees. Suffice to say that the MKZ is class leading in safety and winning awards. 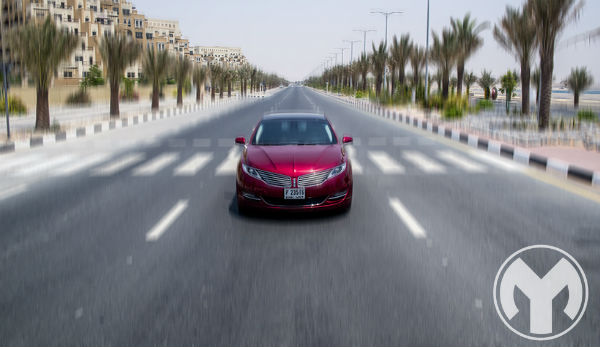 Lincoln has placed into the MKZ a smooth 3.7 litre V6 with 300 bhp. Plenty of torque but I was slightly let down by the 6 speed transmission. It is slight and it’s because you have to be quite gentle with the gas pedal if not to have the transmission kick down to soon. It does this quite smoothly, however was a little on the irritating side.  In Sport Mode the car is eager to get going, maybe too eager sometimes. Kick down comes in as a bit of suggestion. Push your foot to the floor and it will kick down, then it will think for a second and kick down again, meanwhile giving that feeling of body travelling before car. The MKZ is less composed in Sport Mode, a little jittery, so I did tend to stick with standard drive. . Now then the 0-100 Kph test. As always the manufacturers put a downhill figure. A couple of runs were made and I made a figure of 7.2 secs in Sport Mode. Respectable and quite close to Lincoln’s figure of 6.8 secs. 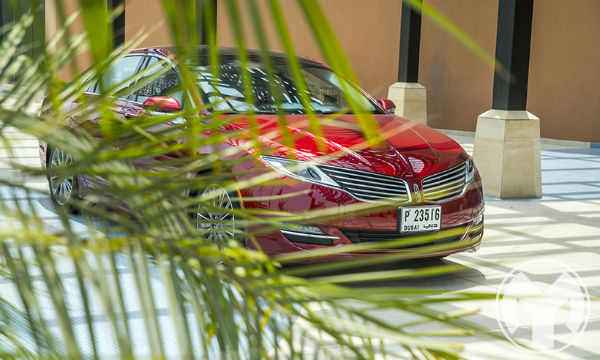 Electric steering, don’t like it. Many companies are now using this method and with most of them they struggle to find the true feeling of the road. This car is no different. Sit on your hands for 5 minutes and then drive, no feeling.

Accelerate hard and as with most powerful front drive cars, you will get torque steer. It makes the car feel light and in the MKZ it is a little excessive at times. It’s stable though, composure is reasonable except in Sport Mode and you can feel the stability control working if to hit a bend with some conviction.

The suspension is nice and firm and the difference can be felt when in Sport Mode as the suspension sits firmer still. What is surprising though is that despite the poor feedback on steering, the MKZ takes the corners quite well. American cars are still slowly coming to terms with corners and the MKZ takes them with some confidence! 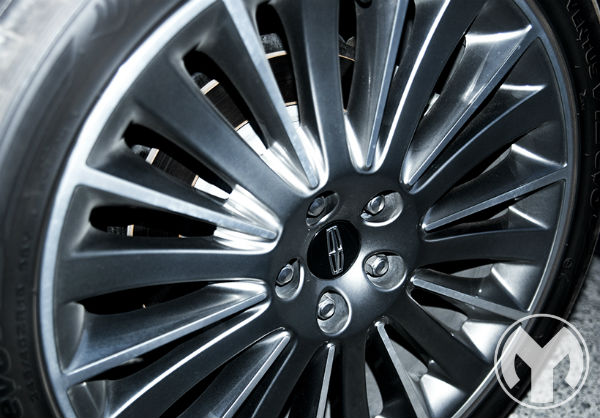 I used two different roads for a braking exercise. One a little dusty and sandy and the other clear. First up, the dusty road. Ok I have 100kph and I punch the brake. The car stayed quite straight but like an unhappy teenager there was drama. All systems were working and it told you so. ABS was vibrating and the stability control was pulling from all sides. The car stopped in 3.62 secs. Mm. Next road, the clear one. 100kph reached and I punch the brakes. Teenager had calmed down a bit here, not so much drama and the car stopped in 3.02 secs.

I feel that this car should be doing a little better than this. I have driven trucks that stop just as quick and many SUV’s on the roads today will stop quicker or around the same. Ok we are talking mere 100th’s of seconds different but this car is not as heavy as the big guys on the road.

I enjoyed this test and have come to understand how encouraging it is that Ford has not given up on the Lincoln brand where many would expect it. What’s more encouraging is that this car promises to be the start of a new era. It highlights to me that there is more to come from Lincoln and the future looks bright. Like Burg Al Arab symbolized to Dubai, the MKZ is going to be the start of a new future. This car has impressed me; they have created something that though a little conventional in luxury terms certainly has the potential to challenge the likes of Lexus IS and Cadillac CTS 3.6. With a few tweaks it will be hitting the big boys in Germany too. I only want to add one final point. Lincoln, you need to bring back the glamour…

Compare Specs: Lincoln MKZ vs Lexus IS350 vs Cadillac CTS