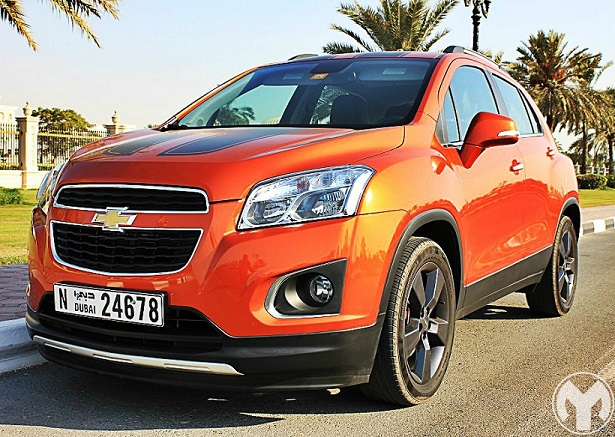 This week, I got my hands on a car which was poles apart from the 2015 GMC Sierra I drove last week. This car is aimed at the practical / unenthusiastic driver who just wants to get from point A to point B in a safe yet comfortable environment. Aimed at the subcompact crossover market, the new Chevrolet Trax looks to lock horns with Nissan Juke, Ford EcoSport and another popular alternative, the Kia Soul. Touted as a ‘youthful car’, here is our road test review of the 2014 Chevrolet Trax: 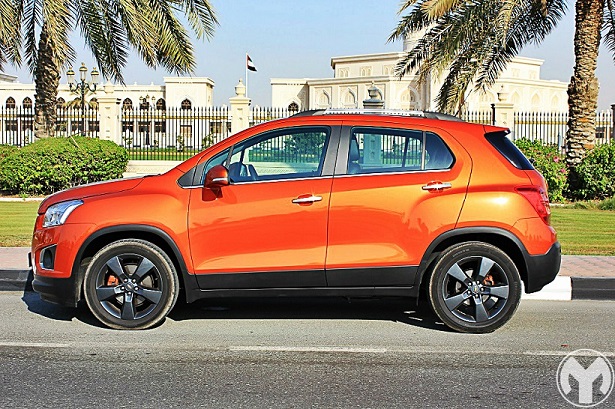 Coming fresh from driving a 2015 GMC Sierra, this car looks like a little baby toy. It looks a lot like its cousin – the Sonic – and is considerably taller, thus making driving easier on unpaved roads. I got the top-spec LTZ version which had auto headlamps and the ‘cool’ striped hood. Although the car tries to impress with its “I-am-fun” appeal, the cute face doesn’t help its case. However, if you compare it to the Juke and the Soul, it is frankly the best of the three as it tries to remain subtle and not go overboard with experimental styling. So, judging by that fact, I would say it does the job. 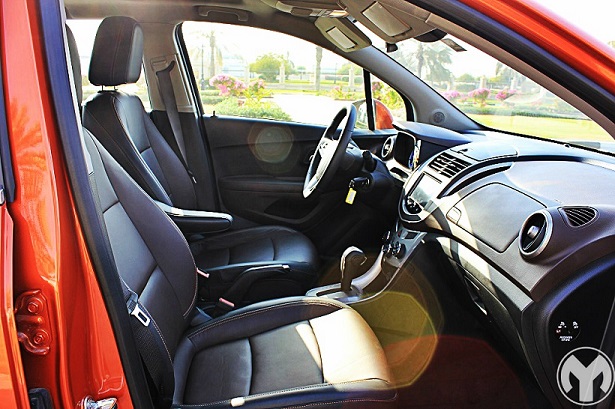 This is an American car and it's cheap. So expectedly, it will have the cheapest form of hard plastic in a car. The interior materials can be compared with the Ford EcoSport we tested recently – a car which also has hard plastics but is actually priced lower than the Trax. But thankfully, Trax is still better in material quality than an EcoSport. The seats have better leather wrap and are considerably more comfortable. However, expect the wind and road noise at speeds of as low as 70 km/h. 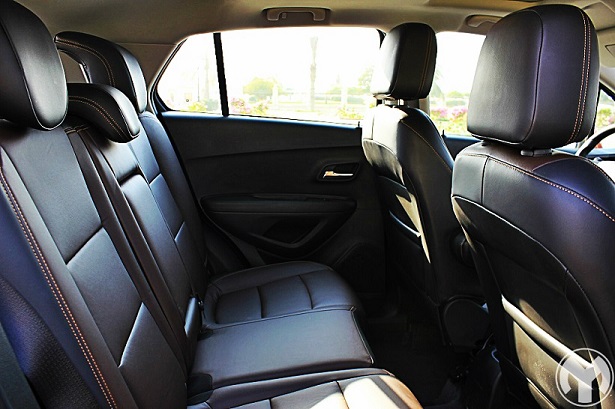 When I first opened the door I was apprehensive about the interior space as the car looked small but I was pleasantly surprised by the interior space. Even with the seats fully pushed back, there was enough legroom for the rear passengers to get in and get out. Now, it is not like sitting in a full-size SUV but for what it’s worth, it’s rather impressive. Boot space is also adequate.

Coming to the visibility, well, the car has small dimensions, which means better judgment and so, whooshing through tight spots was a breeze. Every turn instantly became intuitive and I did not have to look left and right again and again while taking the car out from the parking lot. These factors are important in daily driving and the Trax delivers. 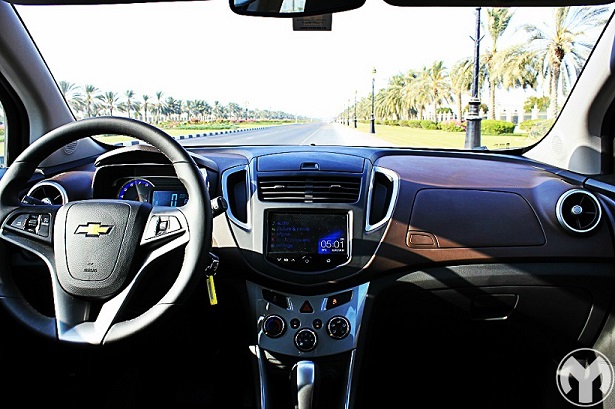 Since it’s the top-spec LTZ trim, Chevy loaded it with all possible tech available. And, I will say that this car thoroughly impressed me in this area. It had rear park assist with a camera, traction control, USB/AUX, 6 airbags, touchscreen, Bluetooth, fog lamps, steering wheel controls, cruise control, electro-chromatic mirrors, compass and driver’s power seat. Overall, the maker understood the practical requirements of today’s driver and loaded it with all the necessary features. 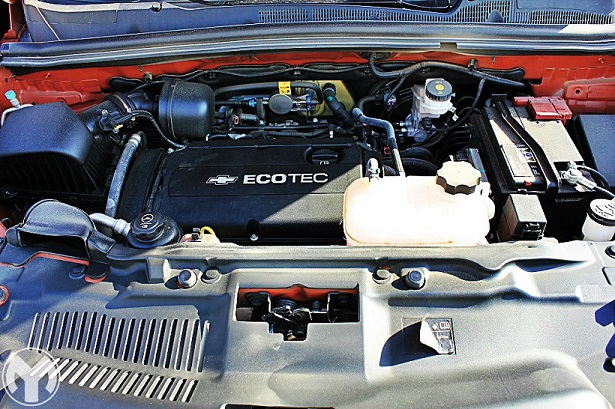 The car is powered by a 1.8 liter 4 cylinder engine producing 138 BHP and 175 Nm of torque. This engine is mated to a 6 speed automatic transmission. Available in FWD and AWD, the LTZ comes only in AWD. This is one area I was thoroughly disappointed. Given the fact that it is a small car, the engine could have been better. Being a 1.8 in a crossover, I imagined it to be in the same league as the 1.5 powering Honda City. But, alas, that’s not the case. This engine is SLOW. On top of that, it screams so much that I had to loosen my hold on the accelerator as the noise became deafening. I figured out that the only way to drive this car on the highway is to never drive on the fast lane. It is because, by the time this car starts accelerating, the other vehicle which you could barely notice in your rear view mirror now stick to your rear and honk while this car is busy screaming. In the test run, this car accelerated from 0-100 in a dismal 13.5 seconds – long way off from the claimed 10-11 seconds range. And, if you’re thinking the paddle shifters will reduce the overall time then no, they don’t. The power and transmission of this car makes it best to drive in the city. Moreover, the average fuel economy in the test run was 8.7 l/100 km after all the flooring – which is good for any practical consumer. The drive is great for the city but highways will be a major struggle. 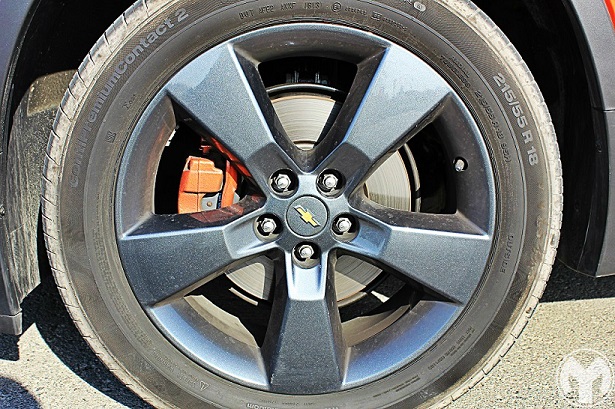 Where this car fails in highway performance, it does redeem itself in handling department. Coupled with small dimensions, this car is a joy to whiz around in traffic. It’s like you’re driving a Toyota Yaris – just a bit taller and with better visibility. The low power gives you the confidence to floor it at all times with that false feeling of hooliganism and the car responds marvelously.  It is as easy to control as the Honda City we drove recently and brakes in the same way as well. In the test run, 100-0 took 3.8 seconds. Having said that, the brakes seemed squishy and had no feedback. The steering is good enough for city driving but not great for highways. Overall, the Trax drives as it is meant to be – like a compact car. So expect body roll and a lot of understeer in corners as you would expect in any small car.

Chevrolet Trax is a cheerful crossover that doesn’t try to invade other territories. It knows it is not at the top of the food chain nor does it carry a fake attitude. It is for daily commuters trying to get on with their daily life on the road in a fun yet affordable manner – with superior ground clearance. I mean, look at that adorable smiley face! It is a great option for urban families with urban commuting needs.

Side By Side Comparison: 2014 Chevrolet Trax vs 2014 Ford EcoSport