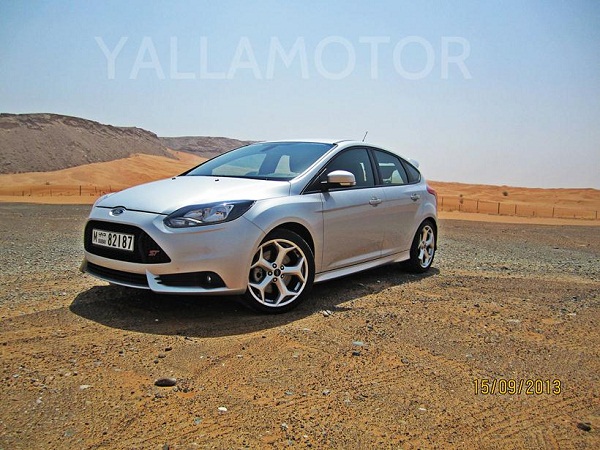 Ford may have just introduced its performance hatchback to our market, but its been in the business for over a decade and has a good few accolades to its name. Is the new Focus ST going to usurp Volkswagen’s Golf GTi as the new king of hot hatches?

The car’s arrival has created quite a buzz in the local market, particularly due to its keen pricing point of AED 95,000. That’s a good twenty grand off a base Golf GTi. Is the low pricing hiding an incompetent vehicle? Is the Golf GTi about to be thrashed at what it does best and shown to be an overpriced tin-box?

This, ladies and gentlemen, could be interesting…… 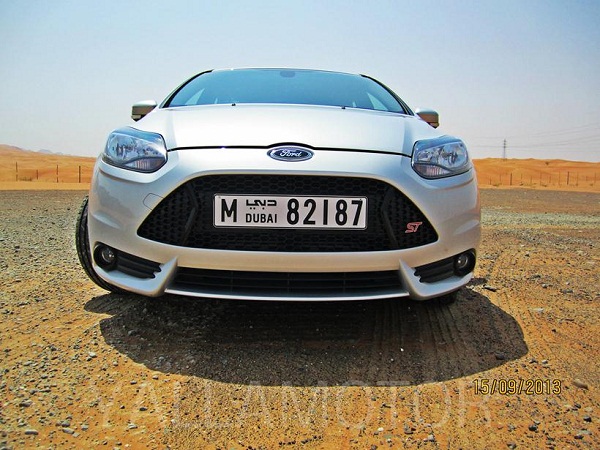 Googly eyed. Gold fish. Those are the first words that come to mind when I look at the Focus ST. It’s a car that permanently looks like its been shocked with its gaping grille. Some may be polite and construe that its aping Aston Martin’s signature face, but honestly, that’s just insulting the gorgeous lines of the famed British marque.

The ST does distinguish itself from its lesser brethren by having a more purposeful stance – aided by aggressive bumpers, side skirts, some nifty Y spoke alloys, a rear spoiler and a broad central exhaust.

In our test car’s sombre silver, it’s quite understated and while some may appreciate that, I personally wouldn’t want to blend into the crowd if I had a rorty hot hatch. There are options for much brighter colours, most notably the blindingly bright yellow advertised all over Dubai currently, and these colours tend to add a little extra pep to a car that’s looking to appeal to a younger market. 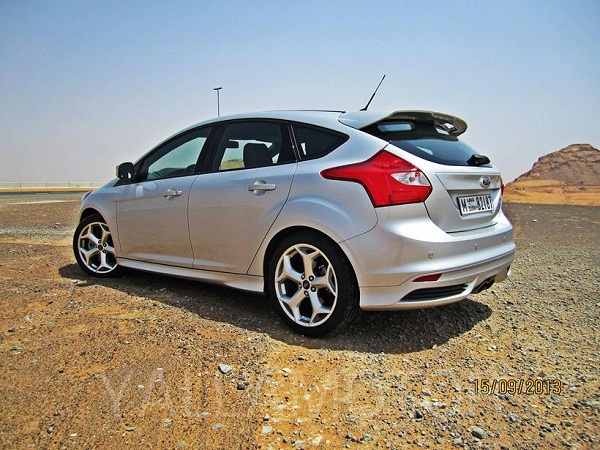 Its not the prettiest car, the Focus ST. Its not going to win any beauty contests or be appreciated for its aesthetics, but it is distinct and its 5 door body shape allows for added practicality. 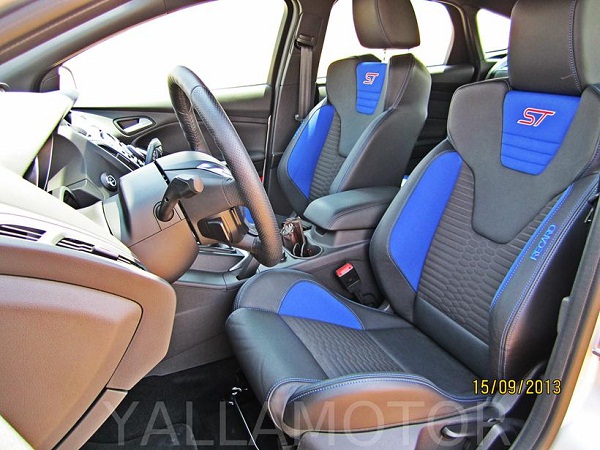 Five door body styles are associated with space and this is what the Focus aims for. The extra doors allow for convenient access to the rear seats, but the front doors are noticeably tiny. It causes the B pillar to be placed ahead of where you would typically position your seats. What this means is that you enter the car and then fall back into your seat. Quite odd.

The interior is filled with myriad buttons the size of ball bearings. Every button is extremely tiny and this does become quite annoying as you have to constantly take your eyes off the road and hunt amongst umpteen buttons to select your preferred radio station and set the bass right. However, the sound system is excellent – something that will sit real well with younger audiences. 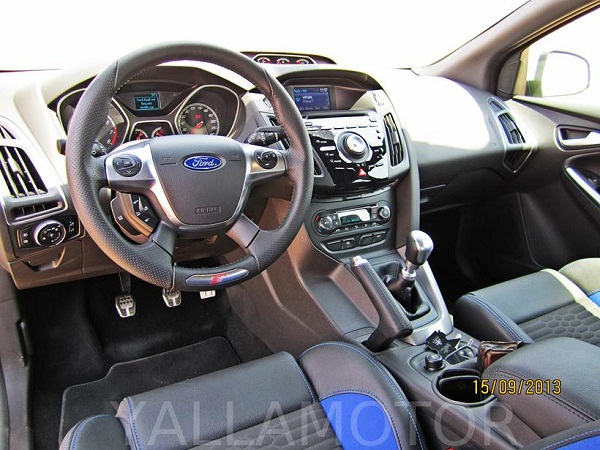 There isn’t much in terms of options. You get cruise control, bluetooth and auto headlights but that’s about it. The headlights aren’t even xenons which make the car feel less than premium. You do get a tiny info screen at the top of the centre console to display information regarding outside temperature, air-con settings and radio stations, but the quality is not up to the mark. There is a set of 3 dials at the top of the dash that show you boost pressure, oil pressure and oil temperature and these look particularly cheap. The interior is filled with plastic galore and this gives it a very budget feel. Come on Ford, the Koreans are doing a better job than this. Features like self-parking and xenon headlights, available on other versions of the car do not feature in the ST, which is probably how it manages to come in at such a low price.

Space is adequate but not generous. The driver and front passenger get enough head and legroom, but the rear seats are a bit snug and legroom is at a premium. There are several cubby holes to drop your mobile phone, wallet and other general paraphernalia into, but you do feel that the largest tumbler of take away Coca-Cola from  your local fast-food joint will not sit steady in the tiny cupholders. Boot space is adequate and would fit a generous amount of luggage. As a whole though, you would just have thought that 5 doors would have given you a lot more practicality than it realistically manages.

The seats made by Recaro are excellent. I don’t have the physique of an athlete - my favourite sport involves using my jaws to munch - and did find the seats quite snug, the side bolsters digging into my waist and ribs. While this may have felt uncomfortable at first, the seats did a fantastic job of holding me in place when driving about, especially when cornering. The material used on the seats is also very grippy and ensures that you are not sliding about the place. They also tend to get more comfortable over time. So don’t be fooled by the initial discomfort – those bolsters are there for good reason and do a sterling job. While the seats are excellent, they just don’t drop down low enough. This means you sit quite high and it doesn’t feel completely natural for a performance car. Seats in the Golf and the recently tested Astra drop right down to the floor allowing for a much better driving position. Also, the steering wheel, which does adjust for rake and reach does not come far out enough to meet you. Couple this with pedals that seem to be flat against the floor mean you adopt a driving position that makes you feel like an orangutan (long arms, short legs) driving an SUV (legs falling straight down to meet the pedals, not stretched out as you would hope).

Oh dear, this does not bode well.

Hot hatches are meant to be daily drivers and this is where the Focus ST really excels. Drive it normally and its as good a car as any. It only comes as a manual but the clutch is nicely weighted with an early bite point and the gear shift is precise and relatively short. There’s good visibility all around and the car potters around town nicely with a light steering and easy controls. The car is even quite frugal when driving ordinarily. Even when moving along briskly as this car goads you to do, you will still comfortably slip in below the 10 litres/ 100km mark. Cruising down the highway will have you averaging just 6-7 litres over the same distance.

While the old model (which wasn’t available here) had a 5 cylinder engine, Ford has used a new 2 litre turbo engine for the new gen model. Pull up any review of the old model and you will read of the evocative 5 cylinder warble. To make up for the lost cylinder on the current model, Ford has artificially piped in the intake sound into the cabin. While some may enjoy the added aural accompaniments, it does feel artificial and I wasn’t a fan of the gimmickry.

The car rides quite firmly but with enough compliancy. It does lack the inherent suppleness found on the Golf or even the adjustable dampers of the Astra OPC but does not crash or feel unbearable at any point.

The only real bummer to daily driving is the turning radius. The car has quick steering with just under 2 turns from lock to lock, but the wheels just don’t rotate enough which means tight manoeuvring can be a bit tricky.

But this is a Focus ST and I know you’re not reading this to learn about fuel efficiency or suspension compliancy. You want to know how it feels when you drop 2 gears and mash your foot down. 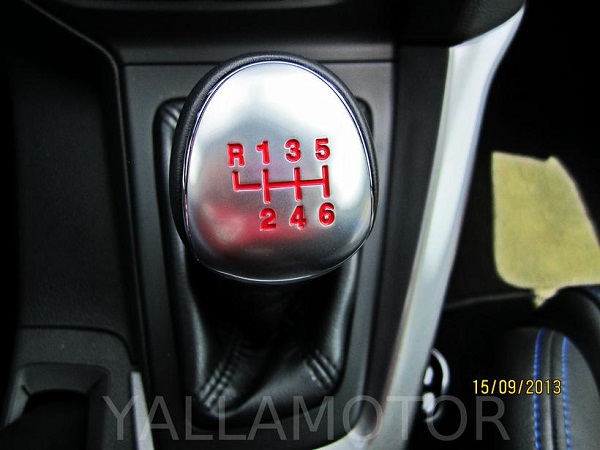 252bhp and 360Nm torque. If you thought that the low price-tag was going to be an indication of a lack of power, oh boy were you wrong. This car has 45bhp on the MK6 Golf GTi and 35bhp on its latest iteration.

And with great power comes great torque steer. If you want to bury your right foot, make sure you have two hands placed very firmly on that steering wheel because it will tug from side to side every time that turbo spools up. Fiesty and how. Having said that, this old school trait does add immensely to the car’s character. Where the Golf GTi can seem a little too refined, this rorty pocket rocket makes you feel alive – well atleast up until it tugs you off the road in a ball of tyre smoke.

Despite the numbers, the car doesn’t feel exceptionally powerful – definitely not 45bhp more than an MK6 Golf GTi. It does give you strong mid-range torque which allows for effortless driving. It does miss a final whallop of power at the top of the rev range – something the Golf does deliver on. The real Achilles heel are that the brakes do not inspire confidence. Don’t get me wrong, the stoppers will bring you to a dead halt, but there is a distinct lack of feel which means that braking from high speeds is a bit of a guessing game. The feeling of uncertainty is also not helped when the weight transfers to the front and lets that mobile rear end shimmy about at speeds well above the national highway limit.

I spent a great deal of time not gelling with the car – not finding a groove until finally, I figured it out.

High speed manoeuvring is not this car’s forte – while speed can be piled on relatively easily, it never feels tied down and the lack of a limited slip differential means that long sweepers bring about fun-decimating understeer. But show this car a set of tight twisting roads, and it comes alive – oh boy it comes alive. Suddenly the light steering, while still devoid of feel, allows you to throw the car into corners. That light rear end allows for immense adjustability. It’s almost like a playful Labrador wagging its tail about. The lack of a diff is no longer felt as the tyres generate immense grip mitigating any understeer, rather allowing for lift oversteer on demand. There’s no real feedback from the wheel in your hands and yet you know exactly what the car is doing through the seat of your pants. This is epic.

And let me remind you again, this car costs ninety five grand. Ninety five. Most D segment saloons with a decent amount of kit cost more. The Astra OPC – twenty grand more. The Golf GTi goes upto forty grand more. Ladies and gentlemen, this car is the bargain of the century.

The hot hatch market in the region has never had it this good. The choices we have today are vast and exciting. There’s a hot hatch to satisfy every need. From the balistically fast Astra OPC to the mega refined Golf GTi. And the Focus ST, well it’s the bargain of the bunch. If you can live without the rear seats and with a dinky boot, you would be better off with a Toyota 86 – 6 speed manual and rear wheel drive for the same price and a lesson in handling and power oversteer. But you’d also be short of 55bhp!

Its not the best in class – that title still sits resolutely with the Golf because it does everything that the Focus does, just about 10-20% better. Aside from the Recaros, the interiors just don’t work for me, feeling way too budget for a top of the line Focus. The steering has no feel whatsoever, but the gearshift is precise and immensely satisfying.

It will do the daily runabout without bringing much attention to itself (in a good way) and on the right roads, will be an absolute riot. It is the bargain of the century and buying it won’t leave you disappointed.