Like all the manufacturers these days building special editions of their popular cars to mark some achievement, Renault too isn’t left far behind. The French car maker waited for the Monaco Grand Prix hype to settle in to release their newest offering – the Clio RS16. The car is created to celebrate the 40 years of Renault Sport.

Coming to the juicy details, the RS16 is basically a Renault Clio Sport with a Megane 275 Trophy R powering it. In other words, the 1.6 liter turbocharged engine producing 197 BHP is replaced by a 2.0 liter turbocharged engine producing 271 BHP. Moreover, the all famous 6-speed manual gearbox comes back to the Clio instead of the paddleshifts that rolled some eyes in the industry. Other highlights include suspension taken from the Clio R3T rally car, track-focused tyres, bucket seats with 6-point harnesses, bespoke exhaust with straight pipes and Ohlin dampers. 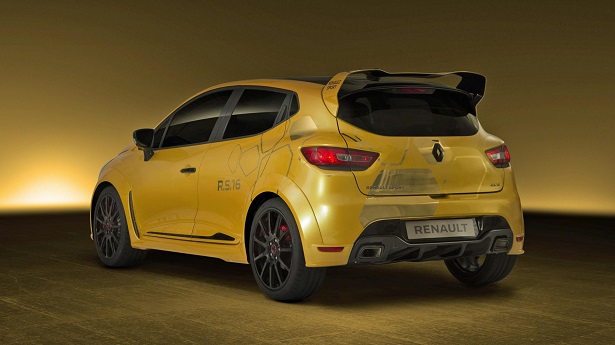 However, the car doesn’t have rear seats and air conditioning to save weight. It is because the new engine is heavier than the regular Clio RS but the manual gearbox is much lighter than the paddleshift option so the overall weight should be almost the same. The body is 60mm wider for track handling by giving bigger wheel arches to fit those bespoke tyres. The rear spoiler is taken from the Clio Cup racer and adds 40 kg of downforce at 200 km/h and above. This car still hasn’t reached the production stage yet so we can’t say the exact number of units to be produced. But, expect around 300 units – each priced about AED 200,000.