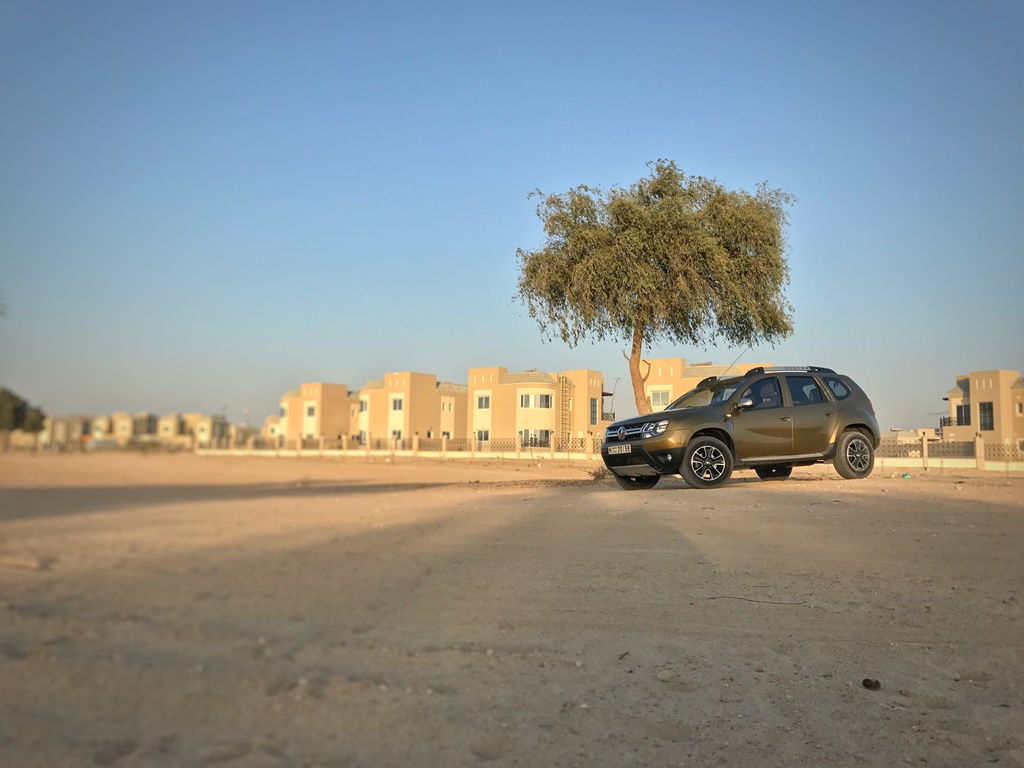 The Renault Duster was first launched in France in 2010 and adopted the alias of the Dacia Duster in some parts of the world, and the Nissan Terrano in others. While the Duster comes in both two-wheel-drive and four-wheel-drive versions, this review focuses on the latter, and aims to gather just how much fun can be had behind the wheel of a budget SUV.

Claimed to be outrageously affordable, the Duster’s AED 49,900 starting price sure is, especially when coupled with a 3 Years/60,000 Km service contract, a 5 years/1 million Km warranty, and 1 year free insurance. 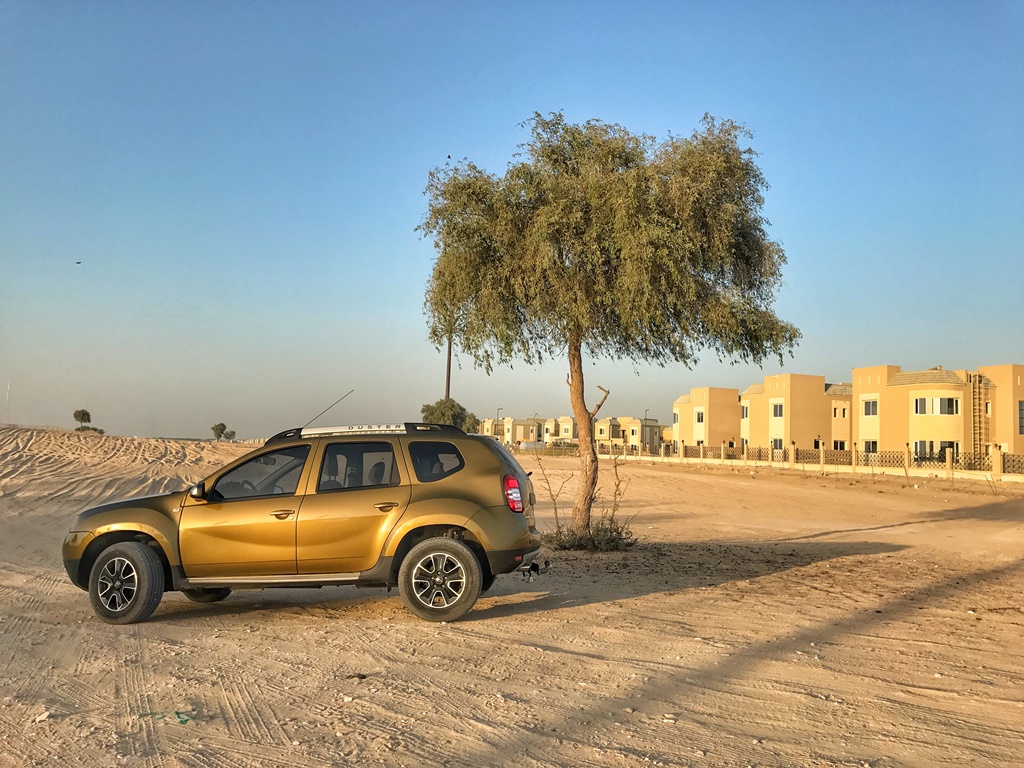 Although it’s halogen headlamps that illuminate the road ahead, it’d be wrong to expect otherwise. Point to note, however, is that it is only the four-wheel-drive variant that rocks a set of 16-inch alloy wheels while the others make do with steel.

Not only is the Renault Duster approximately 45% cheaper than the Nissan Qashqai, but it is also more spacious from the inside. Although it comes across as utilitarian in its design, the cabin is surprisingly roomy and offers ample amounts of head and leg room for all occupants. 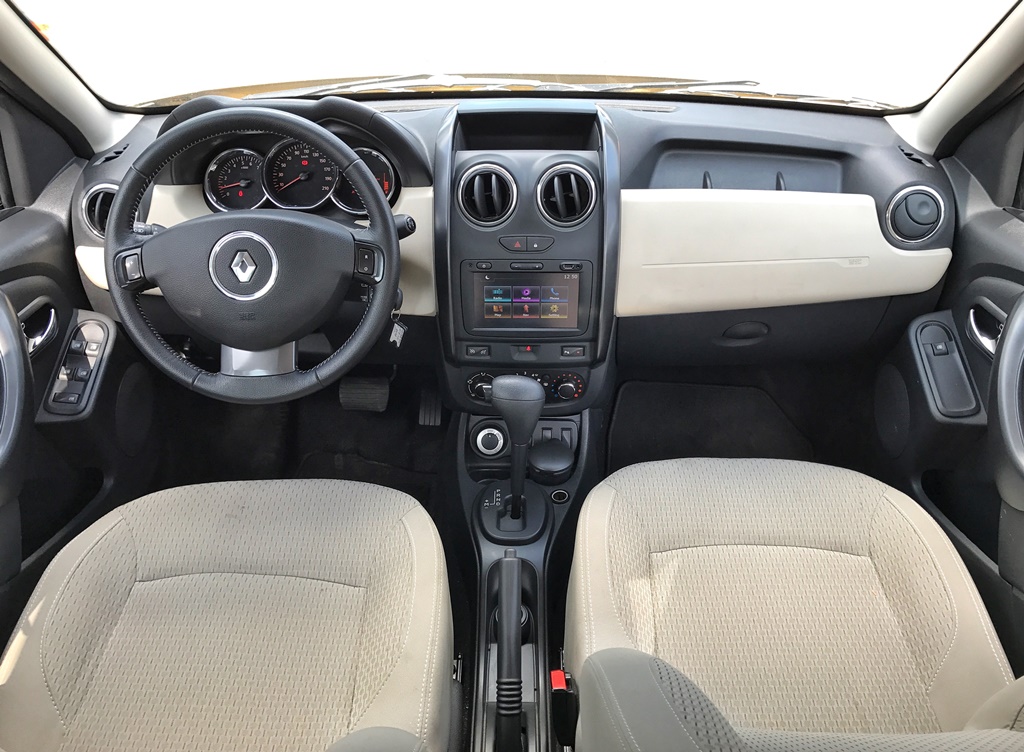 With an evident and rather brave display of cost cutting, the Duster lacks a central arm rest, dons ultra-flimsy bits of trim, and is an ergonomic disaster. The horn is found at the end of the indicator stalk and the cruise control and speed limiter switches sit as pieces of decoration along the center console. 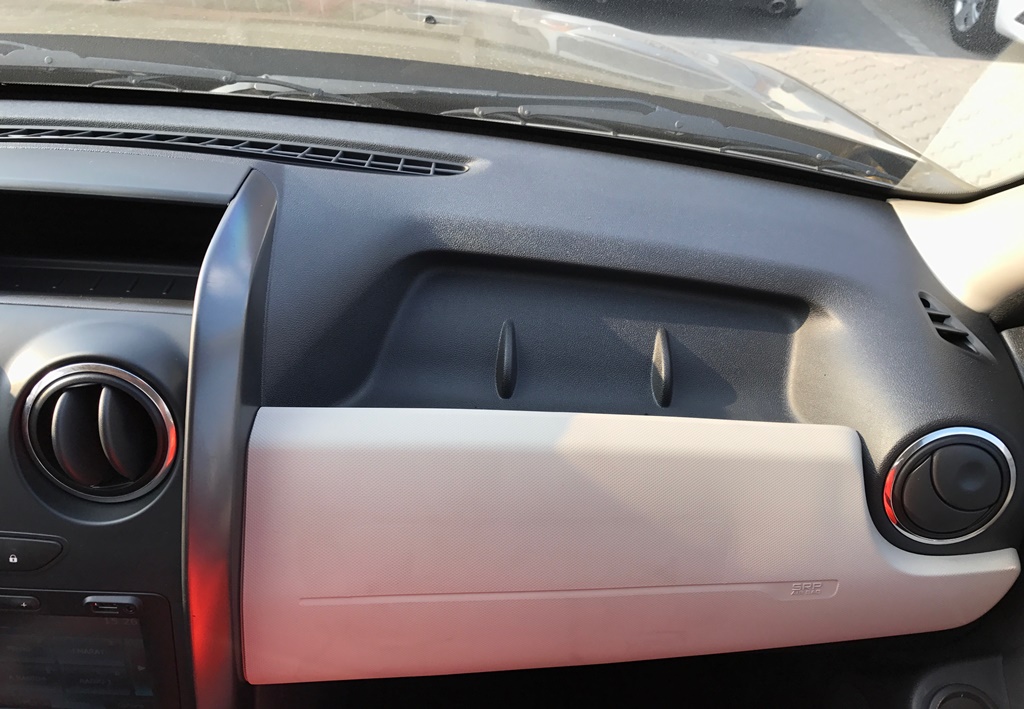 But space, and that’s aplenty of! In addition to two oddly placed compartment bins along the dashboard, there are several cubbyholes for storage scattered around the cabin. Add in a capacious boot that can undoubtedly swallow two large suitcases and the Duster’s practicality begins to shine.

Although the Duster is equipped with the essentials, ABS brakes, Electronic Brakeforce Distribution (EBD), and a couple of airbags, it is unable to keep up with its rivals on the safety front. Awarded a three-star Euro NCAP crash rating, it lags behind the likes of the equally affordable Ford EcoSport. 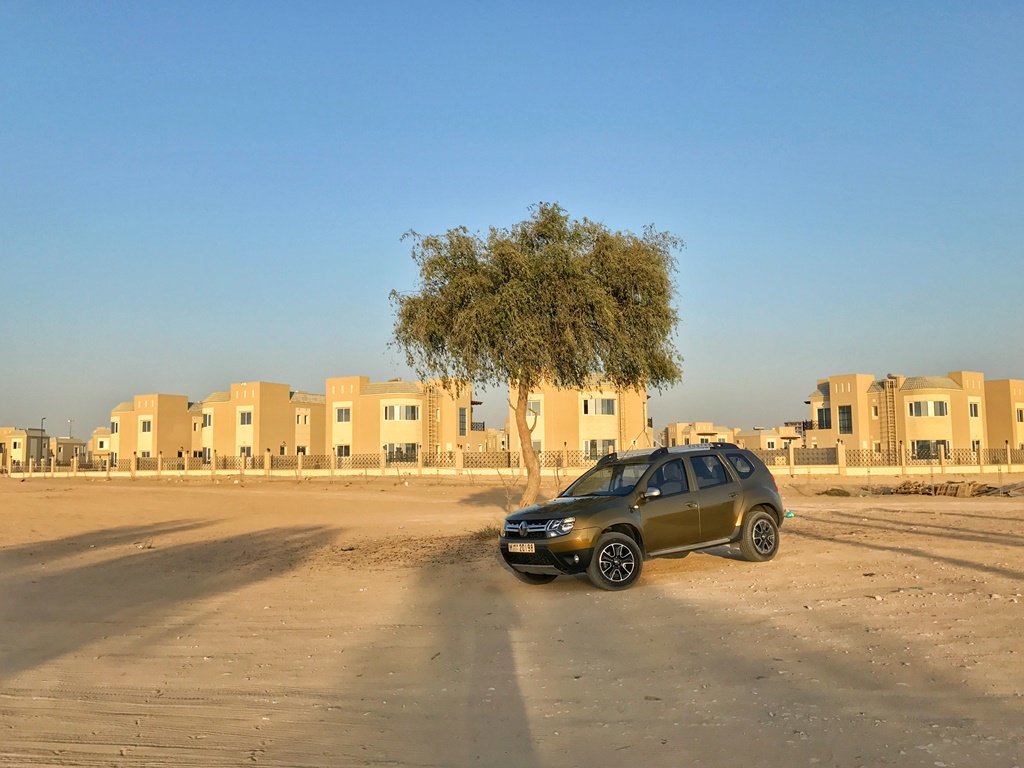 Saving graces come in the form of a decent sound system, a multimedia touch screen with USB and AUX capability, a reverse camera, parking sensors, and an extremely handy speed-limiter function.

The 2.0-liter 4-cylinder engine that powers the Renault Duster churns out a respectable 135 horsepower and 195 Nm of torque. With an easy to operate drive mode selector and impressive approach and departure angles of 30° and 36° respectively, it’s one that is catered to the occasional outdoor enthusiast. 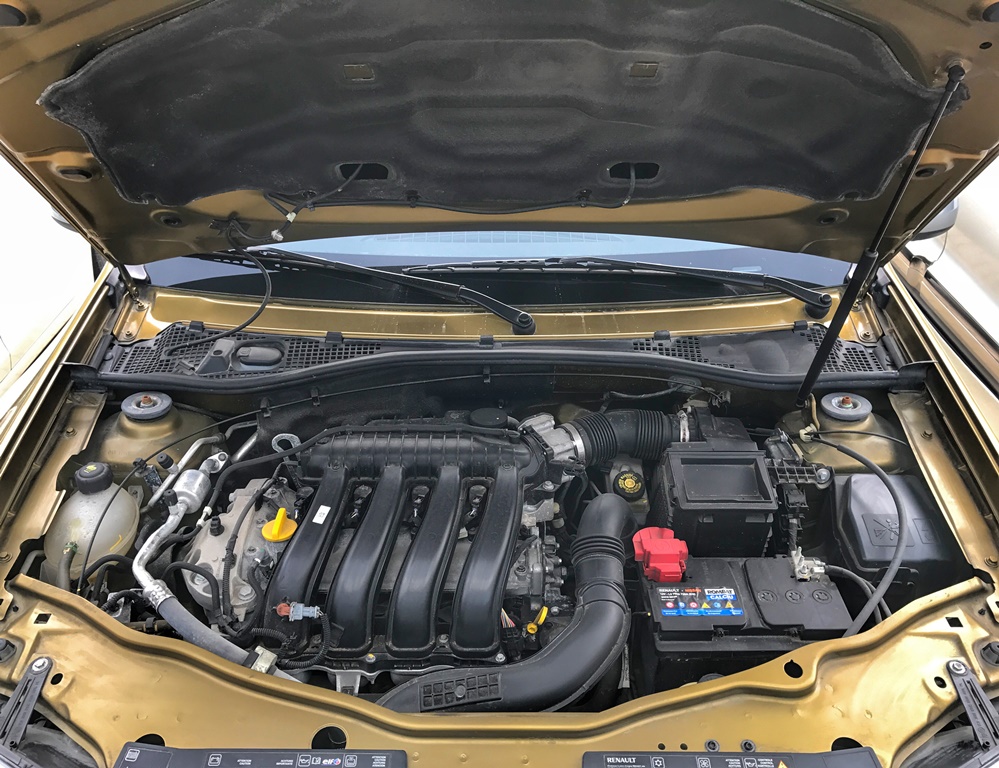 Conquering gravel and small dunes with extreme ease, the Duster is more than capable of handling milder parts of the UAE desert. Granted, it isn’t one to challenge the Suzuki Jimny on the dunes, but that’s not to say it won’t keep trying. 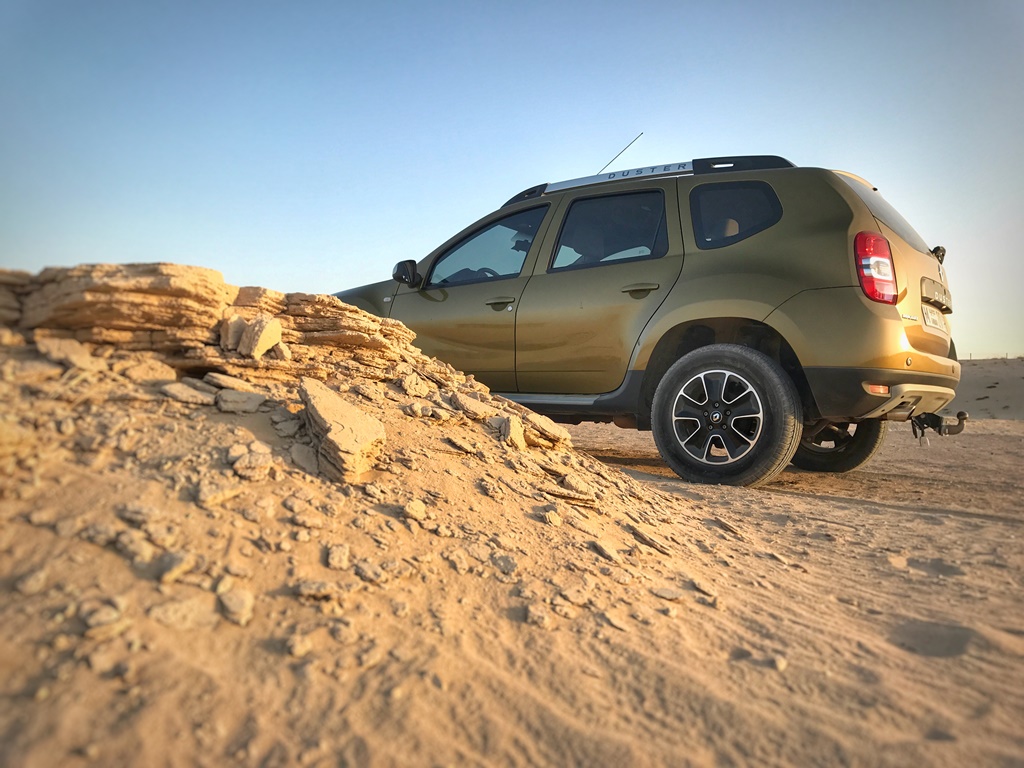 Out on the tarmac, the little SUV copes with arrogant tailgaters and over speeding maniacs rather well, by offering a smooth and comfortable ride once up to speed. Averaging 5.5 liters / 100km, it isn’t a vehicle to be driven enthusiastically. However, should you wish to, the brakes are more than sufficient to bring you to a grinding halt.

The Renault Duster carries a negative connotation in the region and is often the loudest statement of frugality. Although a tad underpowered, it offers more for a lot less than its rivals, and it’s about time that the Duster became less a display of frugality and more a display of intellect. For AED 49,900, you simply can’t go wrong. 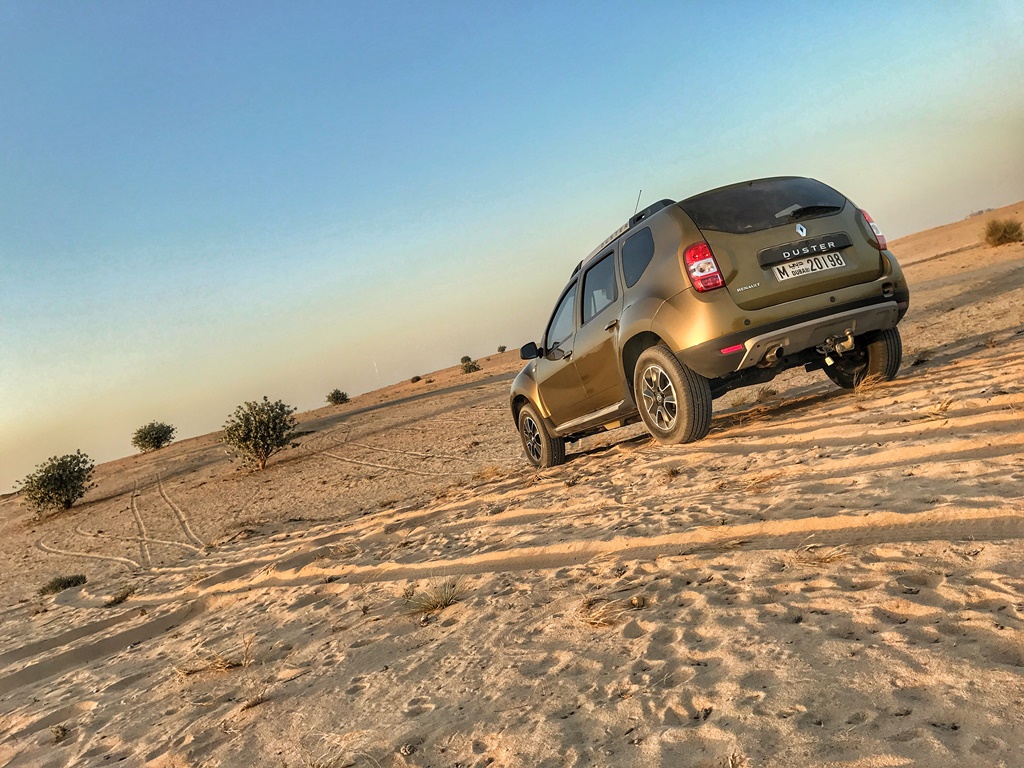 Why the Renault Talisman 2017 deserves your attention