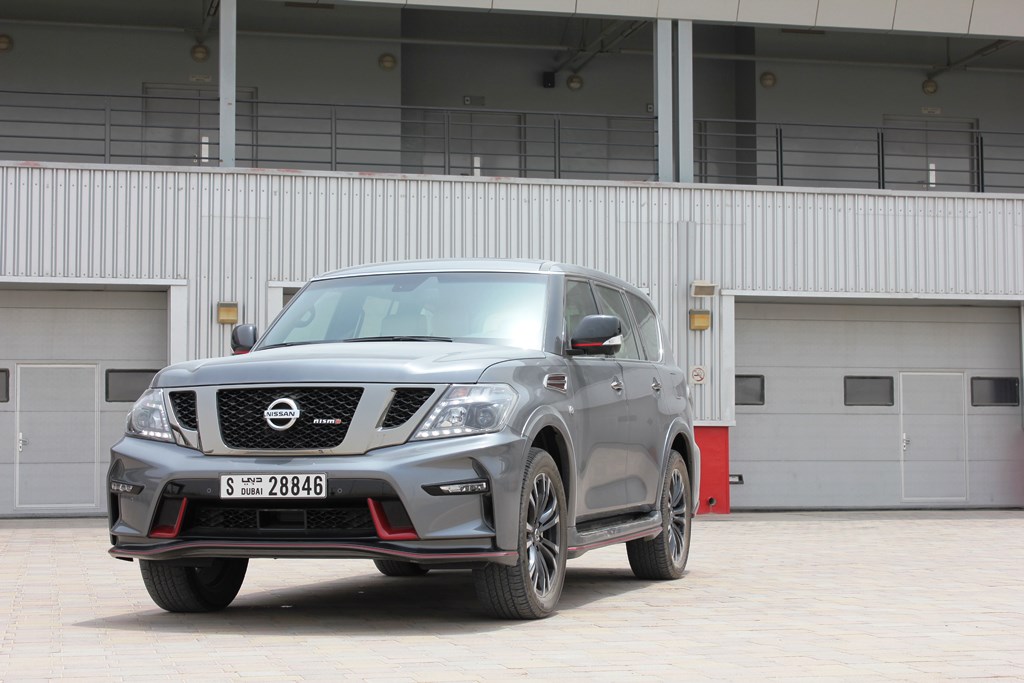 The Nissan Patrol, an SUV that has been in production since 1951 and is a vital part of the UAE’s heritage and culture, has for long been termed the King of the desert. Abandoning its off-road capability for improved performance on the racetrack, the NISMO variant is likely to appeal to a slightly different clientele.

Bearing a tall silhouette that is weighed down by nearly 3 tons of bulk, the Patrol NISMO’s positioning is one that has raised quite a few eyebrows in the automotive space. After all, one must question, performance SUV or successful marketing ploy?

Staying true to its roots, the boffins at Nissan’s in-house tuning and performance division, NISMO, have created an offering that is aesthetically unique, yet not overly aggressive. Subtle differences in the design help differentiate the performance oriented variant from the standard car, while bright red garnishes add a dash of flamboyance to the design. 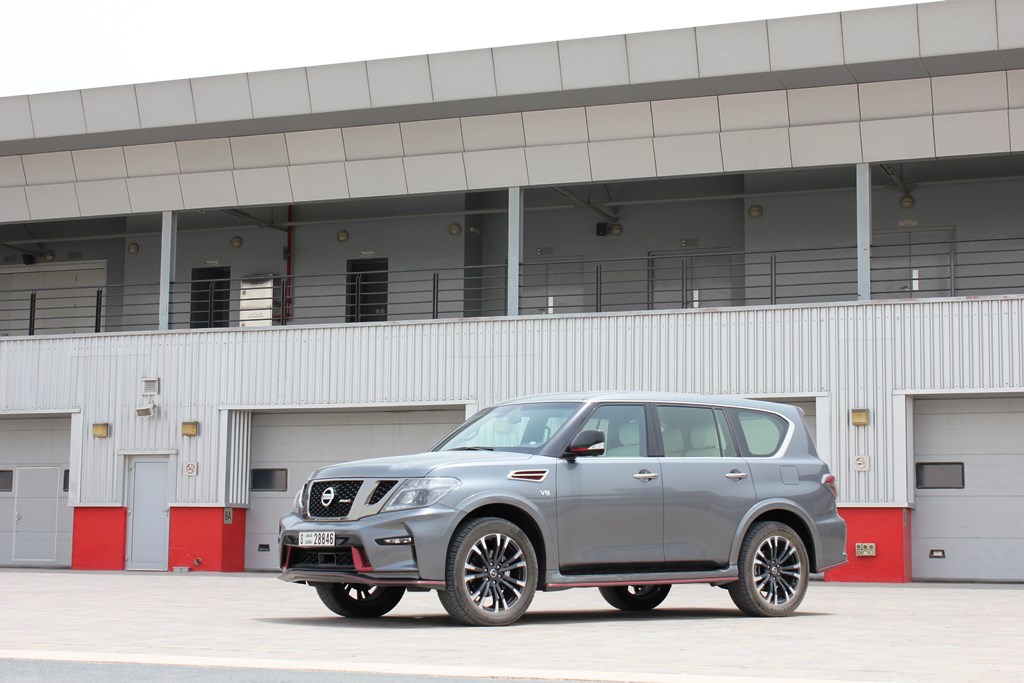 Within the cabin, it isn’t the design that distinguishes the Patrol NISMO as much as the color scheme and the choice of materials. White leather sprinkled with red stitching and contrasted with dark wood trims, are a refreshing change and greatly aid in attracting greater attention to the rose hued RPM gauge, start-stop button, and steering stripe. 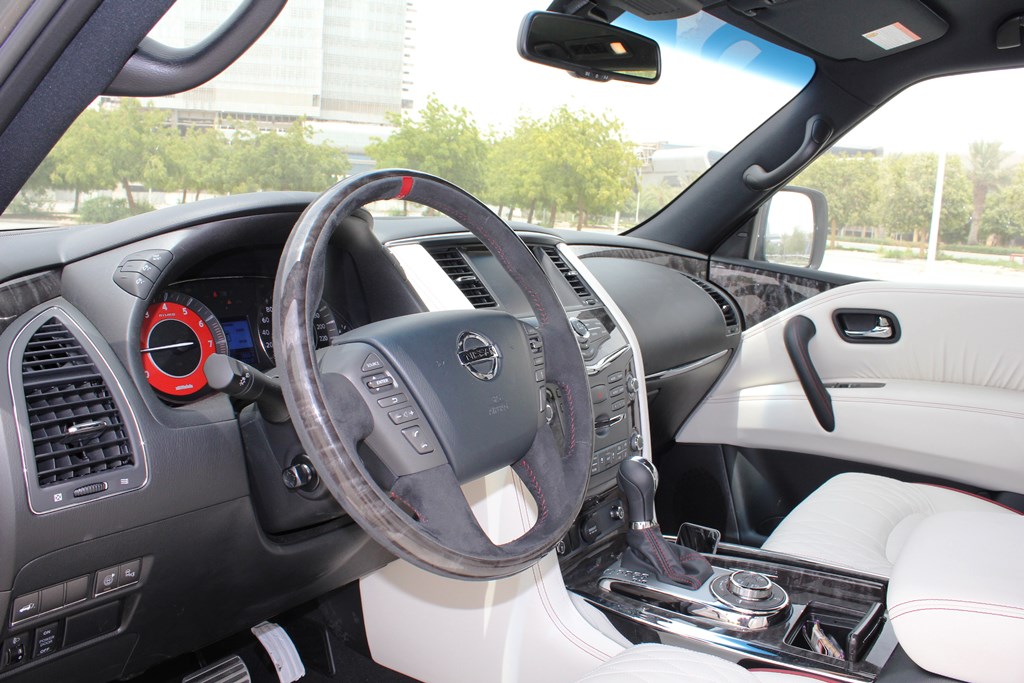 However, that’s not to say the NISMO additions have deterred the luxurious feel of the car that it is based on. Large, well-bolstered and ventilated seats heighten the overall experience and the sensation of being the King of all terrain.

With the Nissan Patrol NISMO based on the LE variant – one of the most technologically advanced SUVs on the market – it benefits from a plethora of safety features including, Adaptive Cruise Control, Lane Departure Warning & Prevention, Intelligent Brake Assist, Blind Spot Warning & Intervention, six airbags and crash-sensitive door unlocking mechanisms. 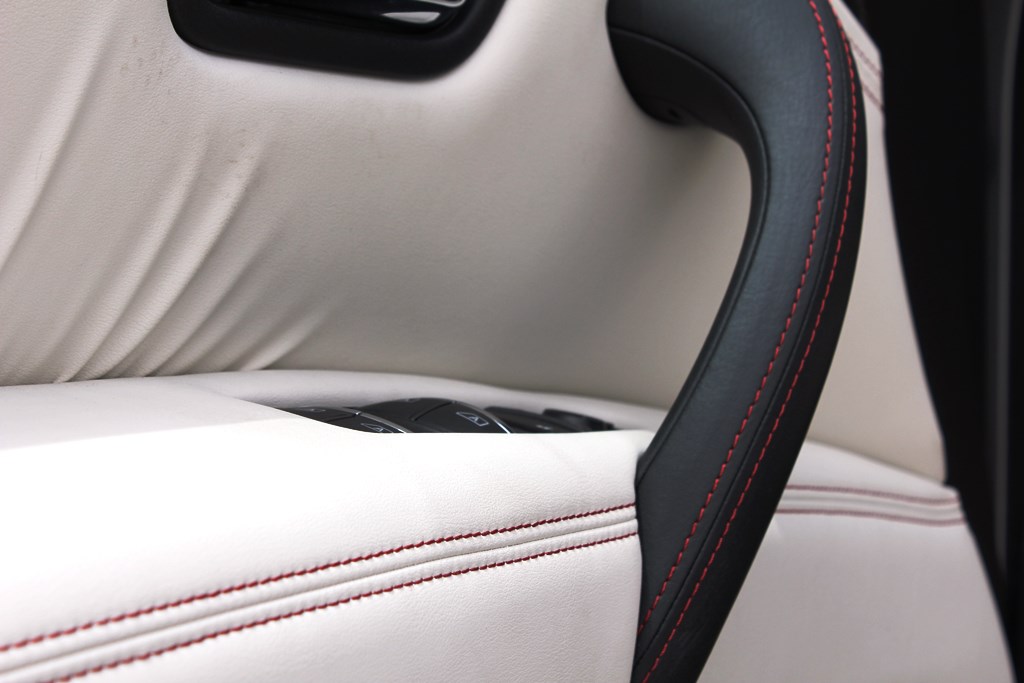 On the technological front, the Nissan Patrol NISMO is equipped with a long list of features which includes but is not limited to, a phenomenal 9-speaker Bose sound system, Bluetooth audio streaming, independent 7-inch DVD screens embedded into the headrests (with wireless headsets), and a 9.3 GB Music Box hard drive.

To match its exuberant exterior, the Patrol NISMO kicks out 28 horsepower more than the standard vehicle and sees torque improvements over 70% of the rev-range. Mated to a 7-speed automatic transmission, the 5.6-liter V8 which resides under the hood, channels 428 horsepower and 560 Nm of torque to all four corners. 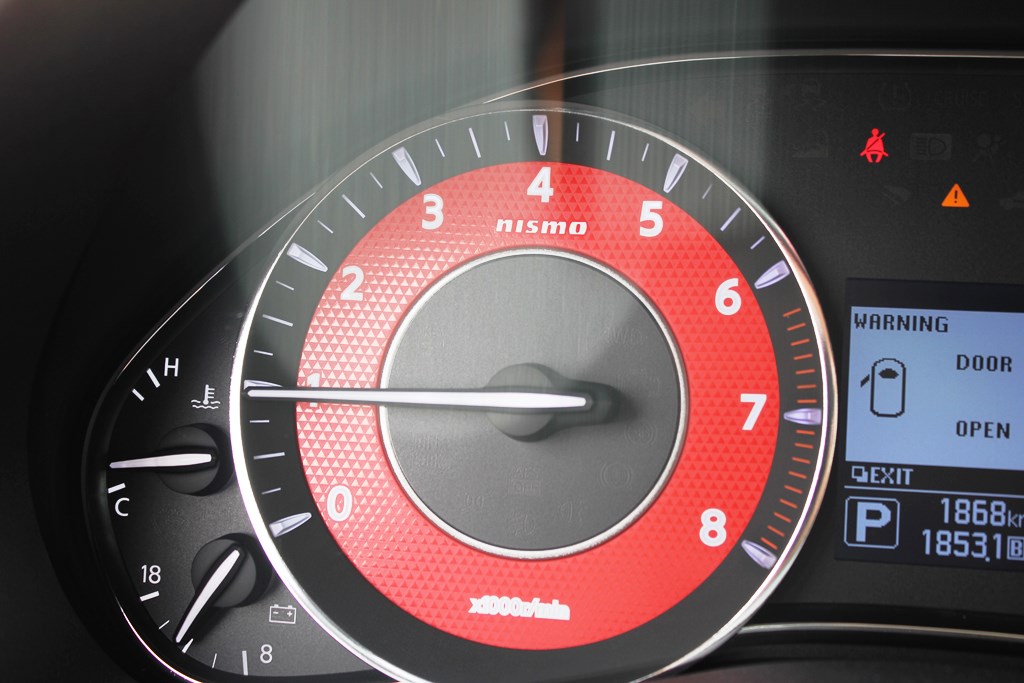 Although some may argue that the negligible boost in power may never truly be felt, it is the urgency with which the gargantuan SUV picks up momentum, that is truly impressive. NISMO tuned Bilstein shock absorbers, offer a slightly stiffer ride and reduce body-roll to a certain extent, but fail to eliminate the noticeable understeer brought on by such a tall offering.

As it stands, the Nissan Patrol NISMO 2016 seems to be an embodiment of the saying “Jack of all trades, master of none.” The Patrol’s positioning as a luxury SUV, hinders the NISMO variant from offering an experience that is truly craved for by performance enthusiasts.

Though hyped to be a hard-core performance SUV, the Patrol NISMO is an extremely mild take on one. And for all that it proclaims to be, there’s a lot of room for improvement. A steering which isn’t devoid of feel, a roll-cage for greater stability, a louder, more operatic exhaust note, and possible weight savings by elimination of the third-row, all come to mind. 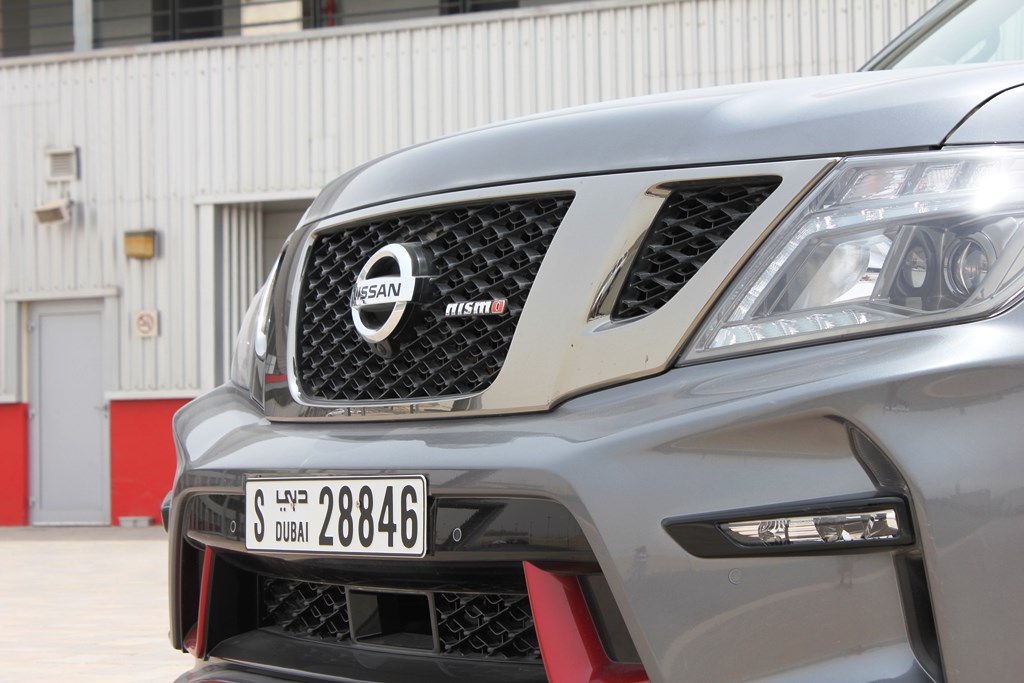 However, it would be unfair not to give the Patrol NISMO credit where it is due. With no direct competitors (since local distributors do not import the Toyota Land Cruiser TRD) and a market that is obsessed with SUVs, the Patrol NISMO is a legend in its own right and a testament to the brand’s knowledge of its customer base in the Middle East.