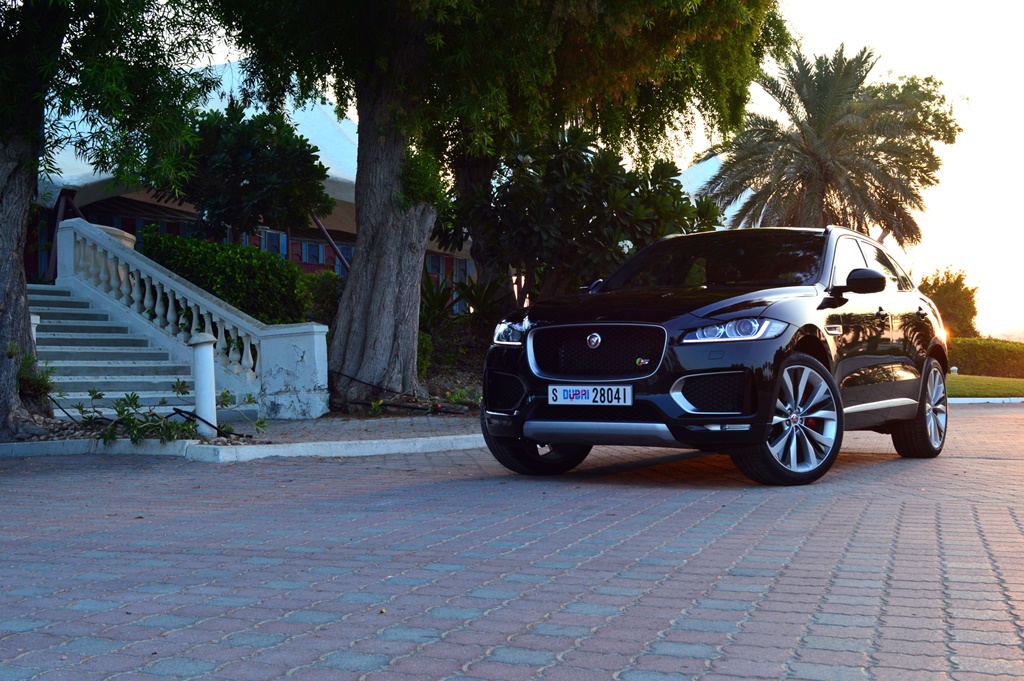 The Jaguar F Pace is the British marque’s first take on an SUV and one that is out to challenge the Audi Q5, Mercedes-Benz GLC, and Porsche Macan. Catered to the city slickers who wish to stand out from the crowd, the F Pace is a contemporary alternative to its traditional rivals.

Brawny and intimidating, the Jaguar F Pace dons a silhouette that clearly denotes its relationship to the astounding F Type. With a bulging hood connoting the power and brutality that lies within, it’s arguably the most striking contender in its segment. 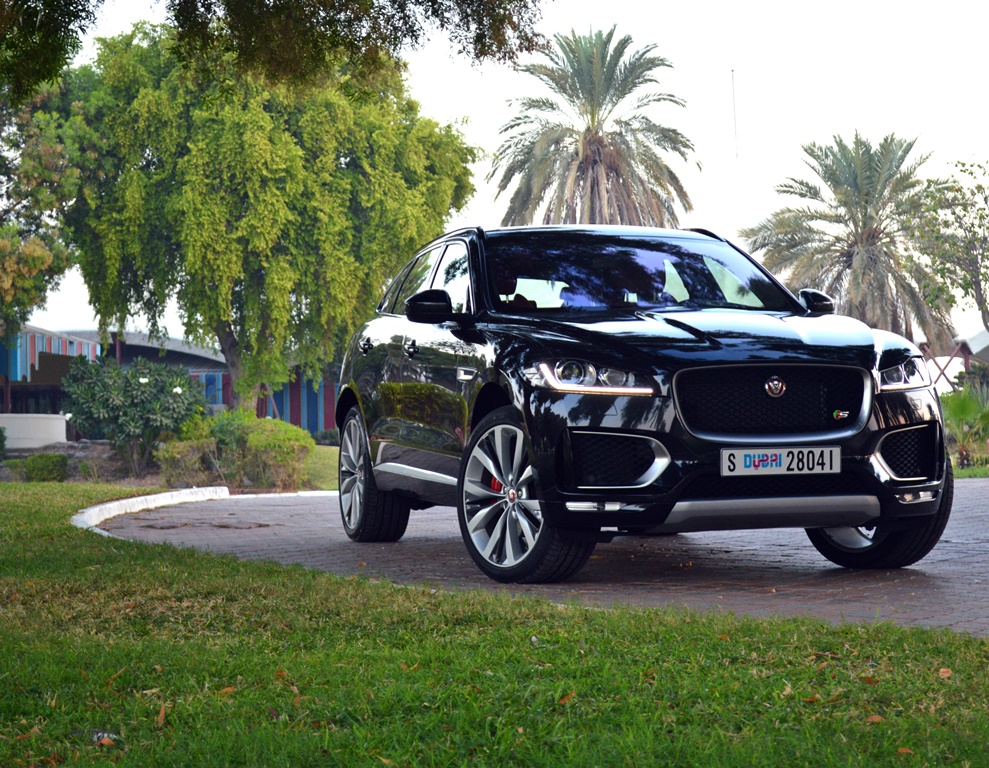 Dressed in a combination of red and black leather, the cabin is an amalgamation of bits and pieces from the unused JLR parts bin. Although well styled, the interiors comprise of a large amount of shoddy and flatly unacceptable hard plastics. 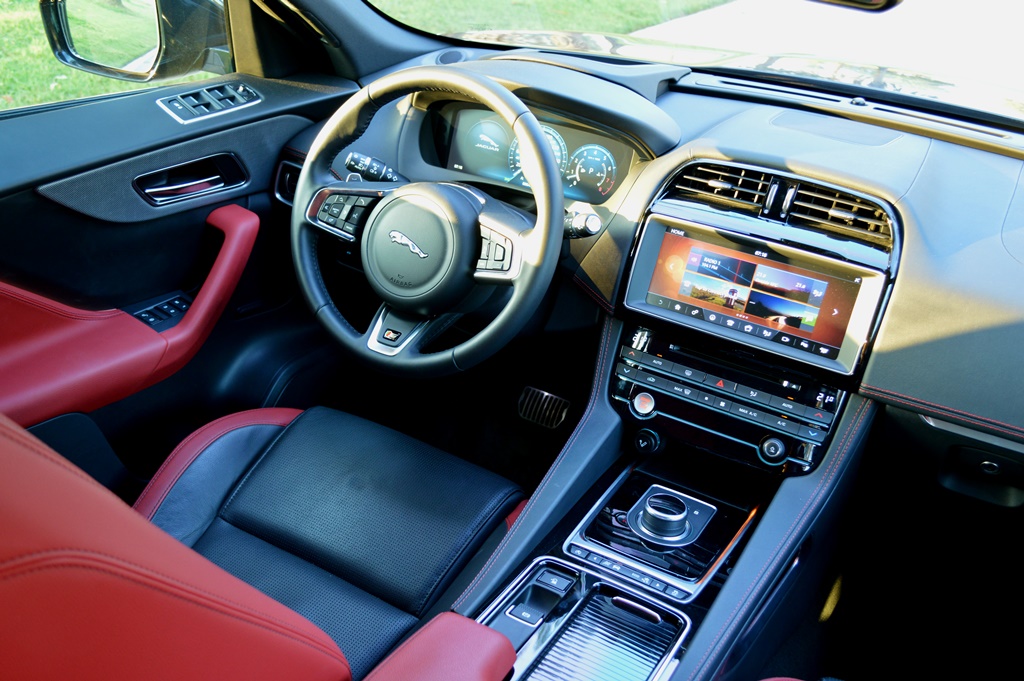 With a wheelbase of 2,874mm and a high transmission tunnel, the F Pace is restricted to carrying just four adults, a figure effortlessly surpassed by its rivals. Due to an elevated seating position and a sloping roofline, rear seat occupants must settle with paltry amounts of head-and-leg room – a distinct consequence of an exceedingly sporty exterior design.

Equipped with a plethora of safety, comfort, and convenience features, the Jaguar F Pace is best described as a technophile’s paradise. Spearheading the way for its segment, the F Pace is home to a fully digital and customizable instrument cluster that in addition to looking great, virtually eliminates any sort of lag. 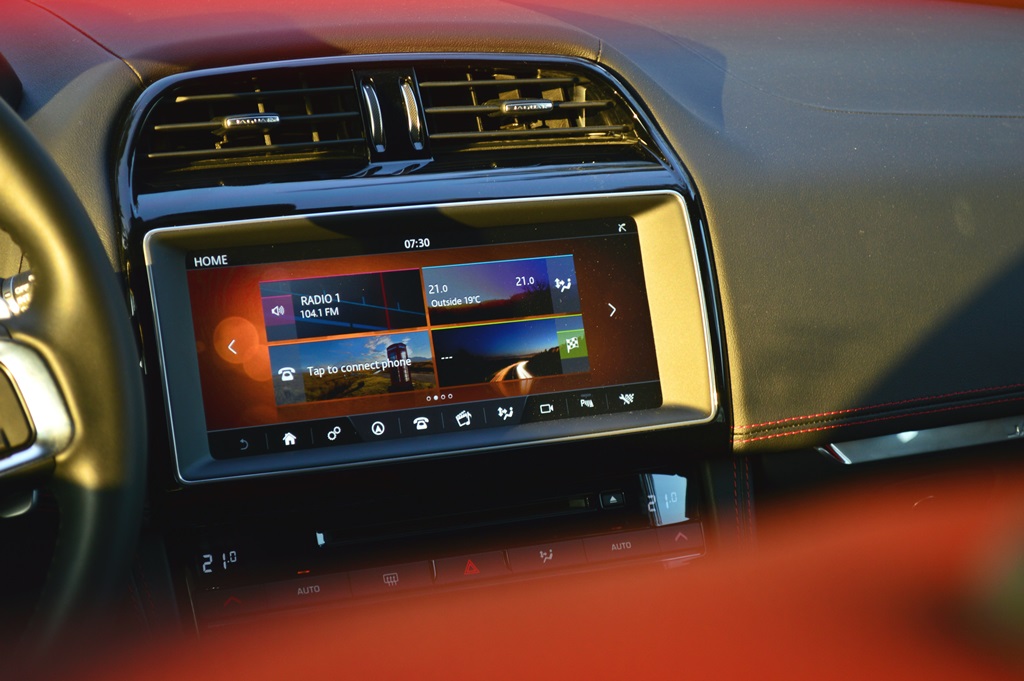 The 10.2-inch infotainment screen that sits along the dashboard, aptly titled the InControl Touch Pro, allows for a multitude of controls while being paired to a 11-speaker 380W Meridian sound system. Add a Head Up Display and a full-length panoramic roof onto the already extensive feature list and the F Pace comes across as rather impressive.

The 3.0-liter Supercharged V6 that resides under the sculpted hood, channels 380 horsepower and 460 Nm of torque through an 8-speed automatic transmission to an All-Wheel-Drive layout. With the supercharger chugging Octane 98 out of the fuel tank, the F Pace hits the 100 km/h mark in 5.5 seconds and bears a top speed of 250 km/h. 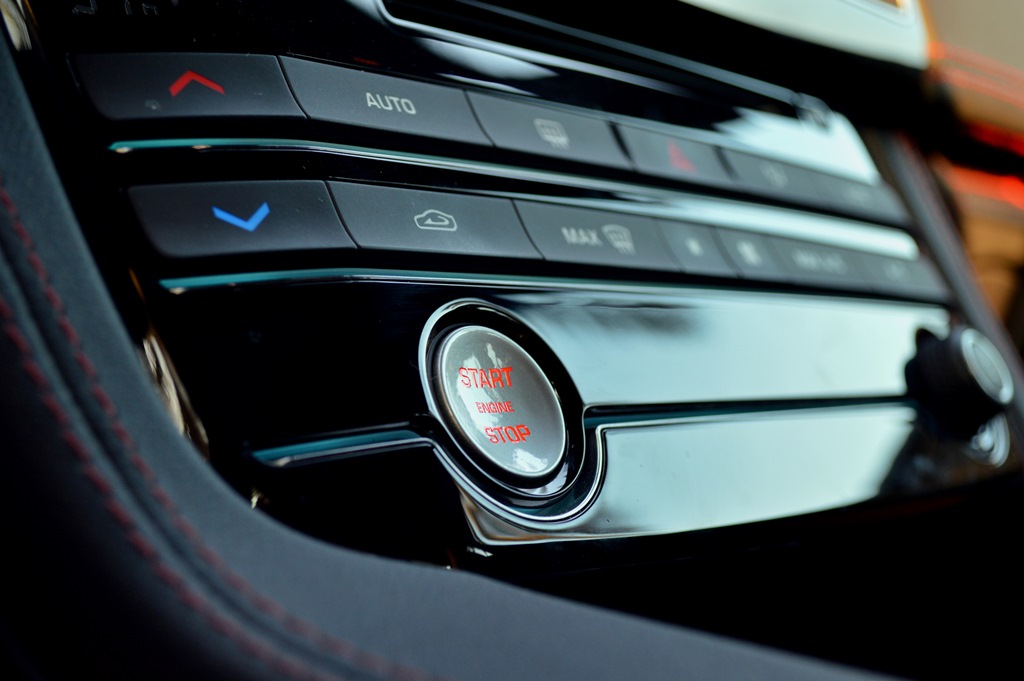 Stiff enough to encourage spirited driving without having to schedule weekly visits to the chiropractor, the suspension set up balances plushness and sportiness to deliver an exhilarating drive that isn’t excessively harsh. With Torque Vectoring and an extremely direct steering, the F Pace is a point-and-go sort of SUV that is more than willing to push the boundaries of physics. 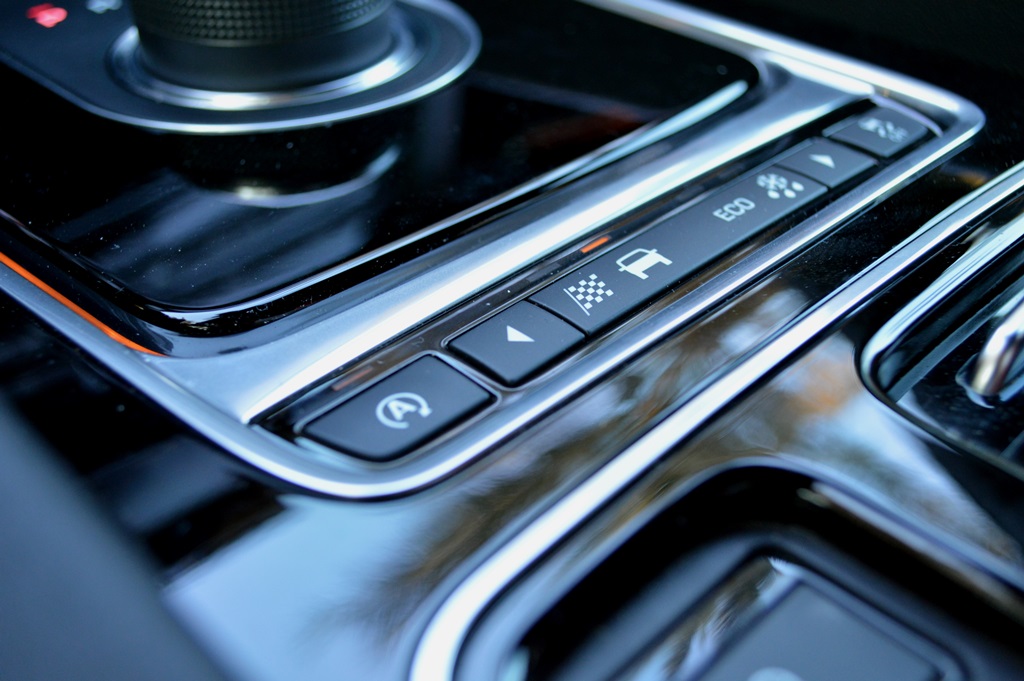 Having said that, the Sports mode which is activated through the rotary gear shifter, is utterly pointless and makes little to no difference whatsoever to the drive. Once up to speed, the squealing brakes are a disappointment that speak volumes about the quality of the vehicle and lack the expected bite. 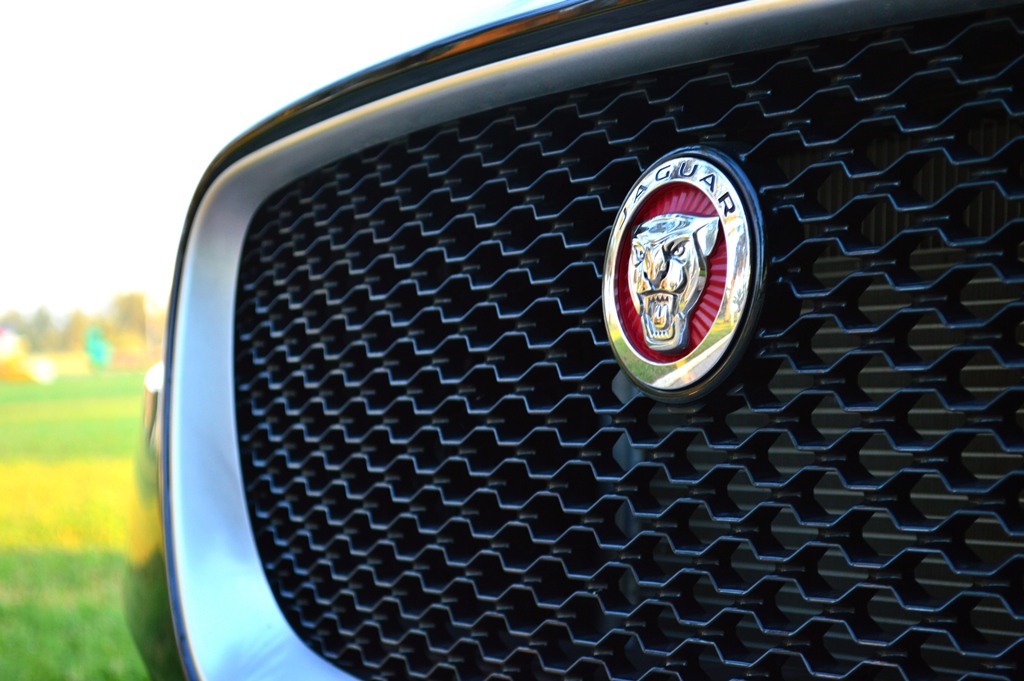 Averaging 13.5 liters / 100 kilometers, the F Pace even when driven sedately, is far from fuel efficient. Struggling to deliver 400 kilometers in exchange for 63 liters of gasoline, it isn’t one to keep the tree huggers happy.

The Jaguar F Pace is a product of several shortcomings and one whose AED 329,000 price tag is far from justified. With a distinct lack of quality, it’s a case in point wherein segment veterans such as the Audi Q5, Mercedes-Benz GLC, and Porsche Macan remain victorious. 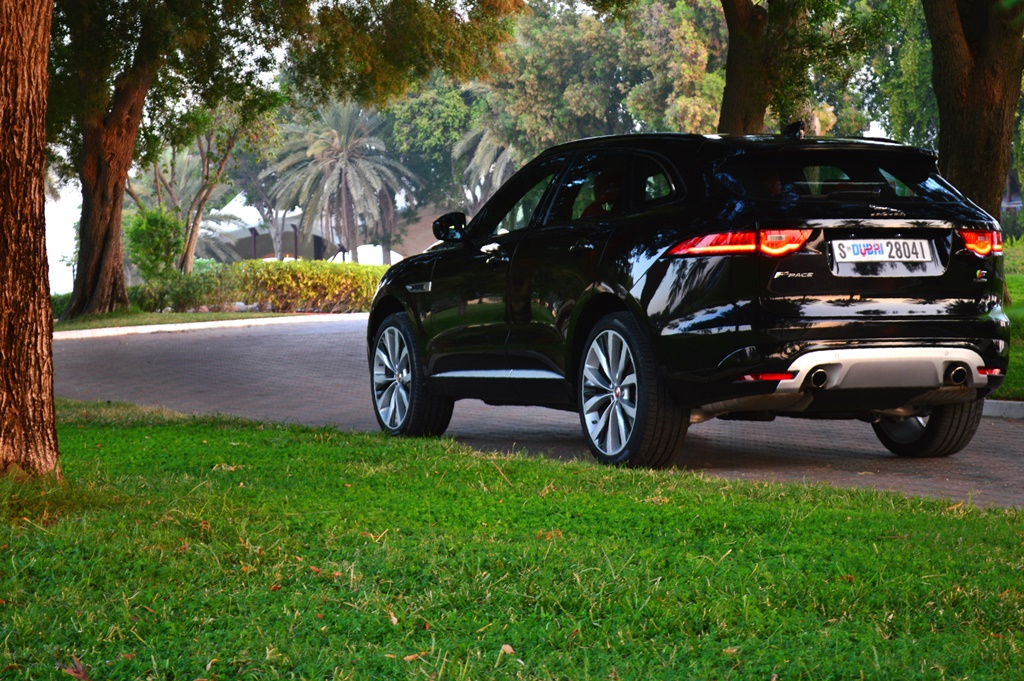 - Great seats that really do hold you in place

- Missing the phenomenal adaptive exhaust system of the F-Type