Compact Crossovers have dominated the market for several years, proving as cost-effective options for small families in and around the UAE. But while many contenders fade away with time, the Ford Escape has maintained its ground, remaining as strong and as relevant as it was in 2001 when it was launched. Taking on the likes of the Honda CR-V, Hyundai Tucson, and Nissan X-Trail, the Escape’s popularity is a byproduct of its affordability, practicality, and everyday usability. 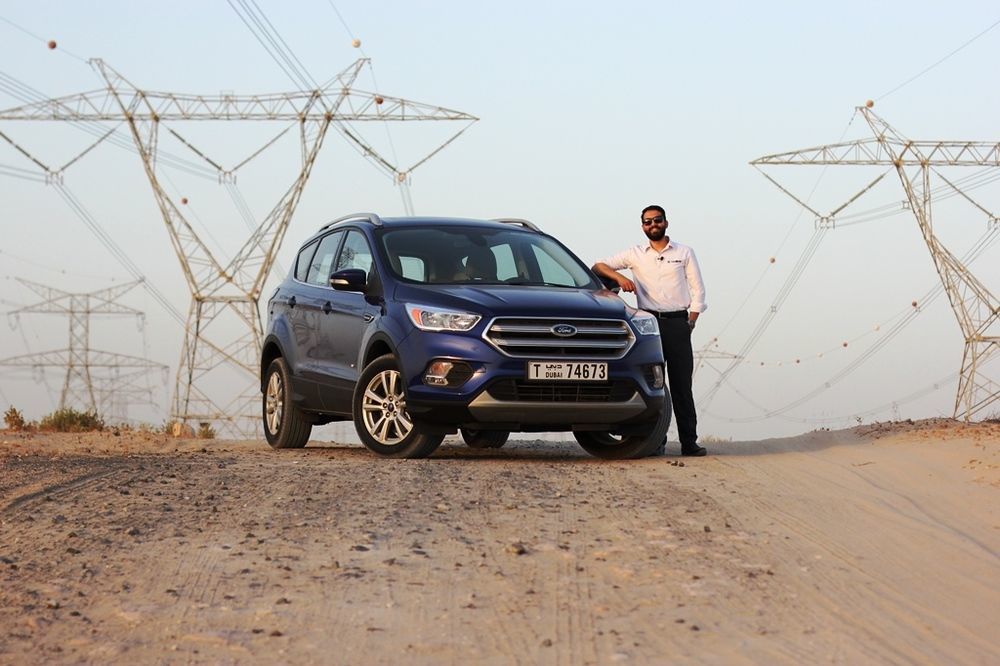 Discreet alterations in the aesthetics see the Escape’s mid-cycle refresh flaunt the American brand’s twin-slat hexagonal grille, an eye-catching lower bumper garnish, and redesigned head-and-tail lamps for a more aggressive stance. Sharing design cues with the car that it is based on (Ford Focus), the Escape’s conventional approach to design prevents it from flaunting the ruggedness of its Japanese and Korean rivals. 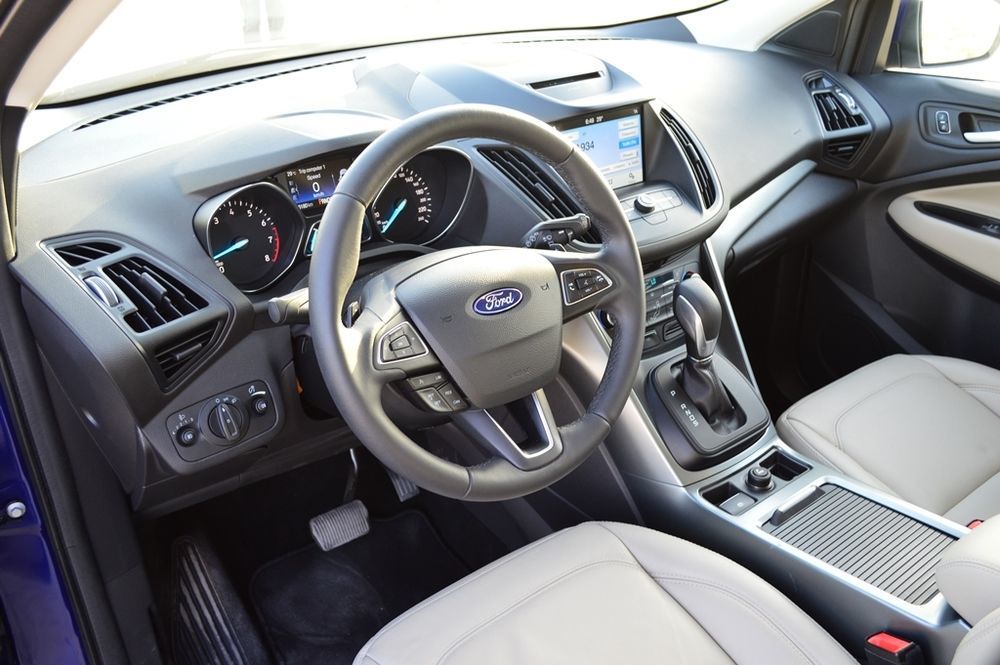 Inside, the simplistic cabin is well laid out with a clear objective of function over form. Having repositioned certain elements along the dashboard, the designers have created the sense of a roomier cabin without altering physical dimensions. A hike in knee-room for those sat upfront, is accompanied by a redesigned center console and a new steering wheel that feels far more premium. Although comfortable, those in the back will notice leg room and cargo room to be lesser than that in the segment-leading Honda CR-V.

A monumental improvement over the brand’s SYNC 2 infotainment system, the all-new SYNC 3 brings with it smartphone-like swipe and pinch to zoom functionality, along with several additions that are bound to be loved by the younger gen. Wi-Fi connectivity, Bluetooth audio streaming, Apple CarPlay and Android Auto, are accompanied by a panoramic roof, foot-activated tailgate, cruise control, and an inbuilt speed limiter. On the safety front, the Escape doesn’t cut corners and offers buyers a whopping seven airbags, including a driver knee airbag, along with a tire pressure monitoring system, and auto stop-start for improved fuel efficiency. 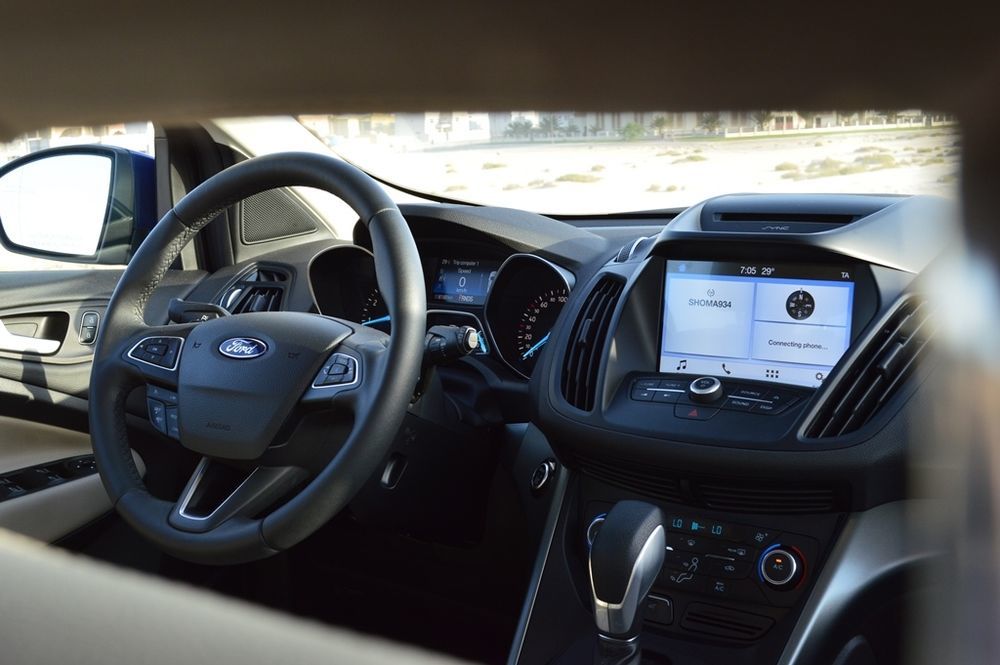 Keeping up with the current trend of smaller displacement turbocharged engines, the Ford Escape 2017 conceals the smallest engine of its rivals, yet delivers the biggest blow. Whipping out 239 horsepower and 366 Nm of torque from its 2.0-liter 4-cylinder engine, the American crossover hits 100 km/h in 7.5-seconds and bears a commendable top speed of 200 km/h.

Out on the sprawling highways of the UAE, the benefits of a smaller engine are noticed almost instantaneously. Pushing its grunt through a six-speed automatic transmission, the Escape averages an extremely impressive 12.1 kilometers to the liter, a figure that is comparable to the likes of a Honda Civic, Toyota Corolla, and Chevrolet Cruze.

Equipped with a full-time All-Wheel-Drive (AWD) system, the 2.0-liter EcoBoost Escape is built to be more than just a tarmac surfer. Monitoring how much grip is available on each tire (up to six times per second), the system automatically directs power to each wheel, avoiding both over-and-under steer, while ensuring optimum grip on all terrain. 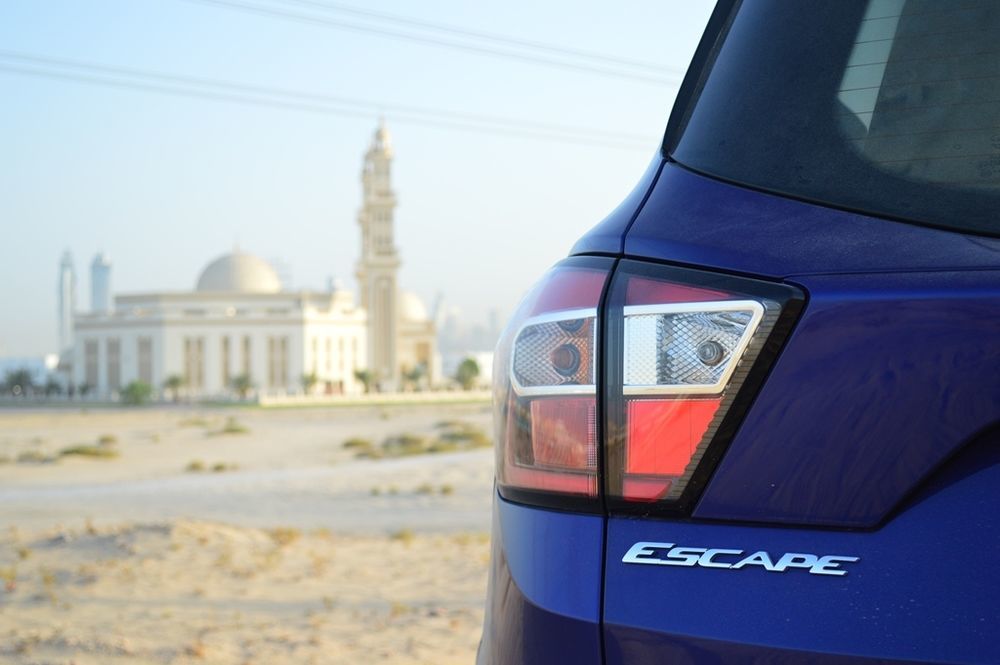 The Ford Escape is an affordable, practical, and dare I say, enjoyable crossover for the modern family. In fact, for what it offers and at the price it does so at, it’s an extremely strong contender that could very well have its Japanese and Korean rivals running back to their drawing boards.

- The EcoBoost engine is both powerful and fuel efficient

- Plenty of great technology onboard

- Not as stable as one would’ve anticipated on the highway

- Quality of materials could be improved

Infiniti unveils Q50 and QX30 ahead of 2017 Dubai Motor Show