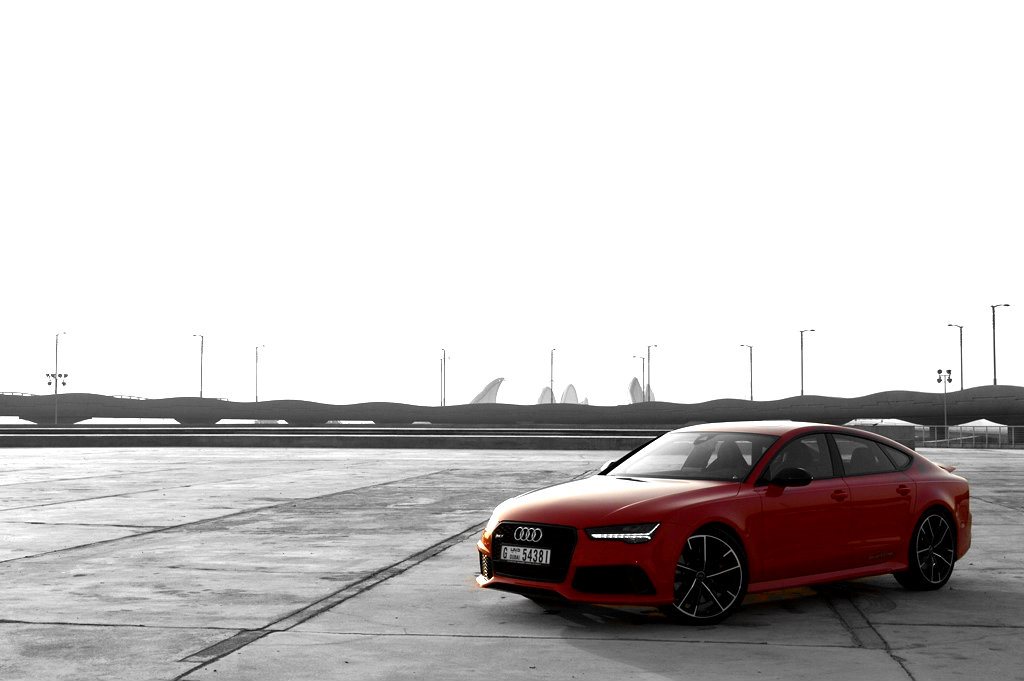 Audi have always been known for their all wheel drive Quattro systems made famous by their impeccable rally heritage. In fact, from 1981 to 1985, 23 rallies were won in Audi Quattro cars as well as Audi also taking 6 consecutive World Rally Championships (WRC). The Audi RS7 was first introduced in 2013, of the back of the successful A7 was began production in 2010. The RS7 is competing with the fastest 4 door saloons in the market, with the likes of the BMW M6, Porsche Panamera Turbo S and the Mercedes CLS63 AMG.With the M6 being produced for nearly 30 years and the Mercedes for nearly 25 years, the RS7 should have some catching up to do, but does it?

The exterior of the Audi RS7 performance is actually fairly understated, apart from the Quattro graphics, it’s not shouty or in your face. It looks like the car is for the type of person that wants to have insane performance but not have anyone know about it. And if that's the case, Audi have nailed the RS7 performance. It’s a lovely blend of smooth lines draping from the front of the vehicle all the way through to that gorgeous sportback. We got the car in Misano Red with a pearl effect and I have to say, in the sunlight it is spectacular. The wheels, 21” cast aluminium alloy, 5 twin-arm design in gloss anthracite black, the perfect shoes for this beast.

My initial feeling when getting inside the all new RS7 for the first time was that the cabin was beautiful and much like the exterior, understated but filled with high quality features such solid aluminium buttons and draped in Valcona leather in black with honeycomb stitching in black. I was slightly disappointed with the steering wheel as i’m 99% sure its exactly the same as the one in the 252 hp A4 we recently tested and considering the price difference and the objective of the vehicle, I would have prefered a much sportier feeling wheel. 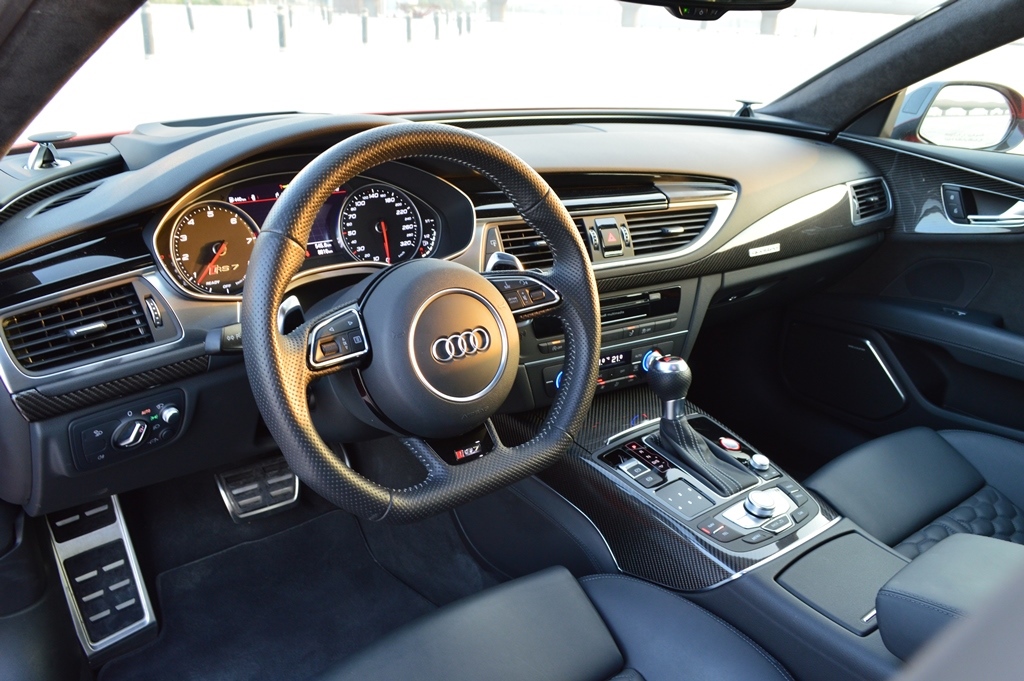 Another aspect i’ve learnt Audi owners in the Middle East have to put up with are the scolding hot buttons and knobs but least you can sit in the luxurious cabin for 10 minutes while they cool as the seats are incredibly comfortable. On the other hand because the AC is phenomenal in the GCC Spec RS7 the car cools very quickly. One difference from the A4 that was welcome was the gear shifter, basic up and down. A saying comes to mind when i think of this, don't try and fix something that isn't broken. 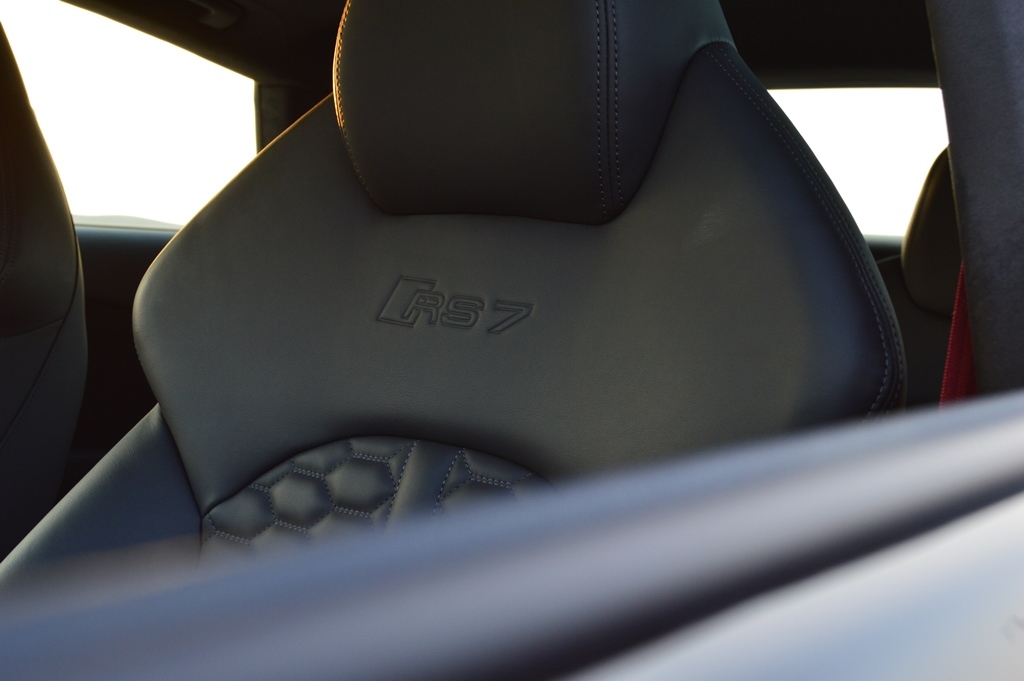 The rear seats have a surprising amount of space. You’d think you have to cut the passengers in half looking in from the outside due to the sportback. Audi thought of this, obviously, as it's a 4 seater they have put large scoops in the headliner providing a decent amount of headroom. The RS7 is a very comfortable 4 seater that's for sure.

The 2016 Audi RS7 comes with a huge array of brand new technology and assists. The assistance package comes with 360 degree cameras, Audi side assist including Audi pre sense rear, cross traffic assist, exit warning, park assist and parking aid at the front and rear of the car. All of those systems work very well and really do make driving less stressful. I did try the park assist and even though it was able to get me out of the spot, didn't give me enough confidence for that system to be used on a frequent basis. 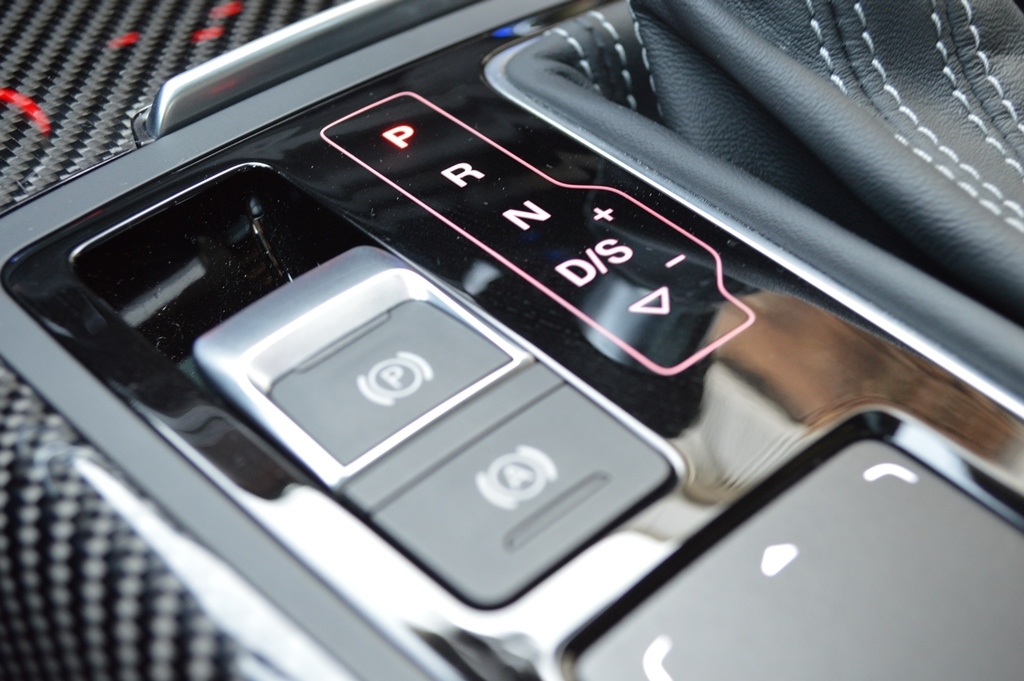 The all new MMI and virtual cockpit are awesome. The MMI system is displayed on an 8.3 inch monitor has the touch sensitive capabilities in the scroll wheel to zoom in and out and write characters for the Sat Nav or Audi phone. The system also has the ability to customise nearly every aspect of the technology package built into the car it's also quick and very easy to maneuver through.

The Bang & Olufsen 3D sound system is absolutely incredible, it's seems the Bang & Olufsen system is one option every owner should pickup. You really do feel like you're at the concert. It has massive depth of sound and really envelops you in the music, exquisite.

The new Audi smart phone system integrates Android and iOS mobile phones into the MMI interface. You can also place your mobile on top of the centre storage compartment to activate wireless charging.

Just in case you wanted something faster than the already sensory shattering RS7, Audi has just introduced the RS7 Performance. With a 45 bhp increase (up to 605) and an extra 50 NM of torque the all new “Performance” model really is the benchmark for super saloons. Boasting a 0-100 time of 3.7, 0.2 seconds faster than the base RS7. It’ll continue onwards to 200 Km/h in 8.2 and if you had it derestricted wont stop until you hit 305km/h. 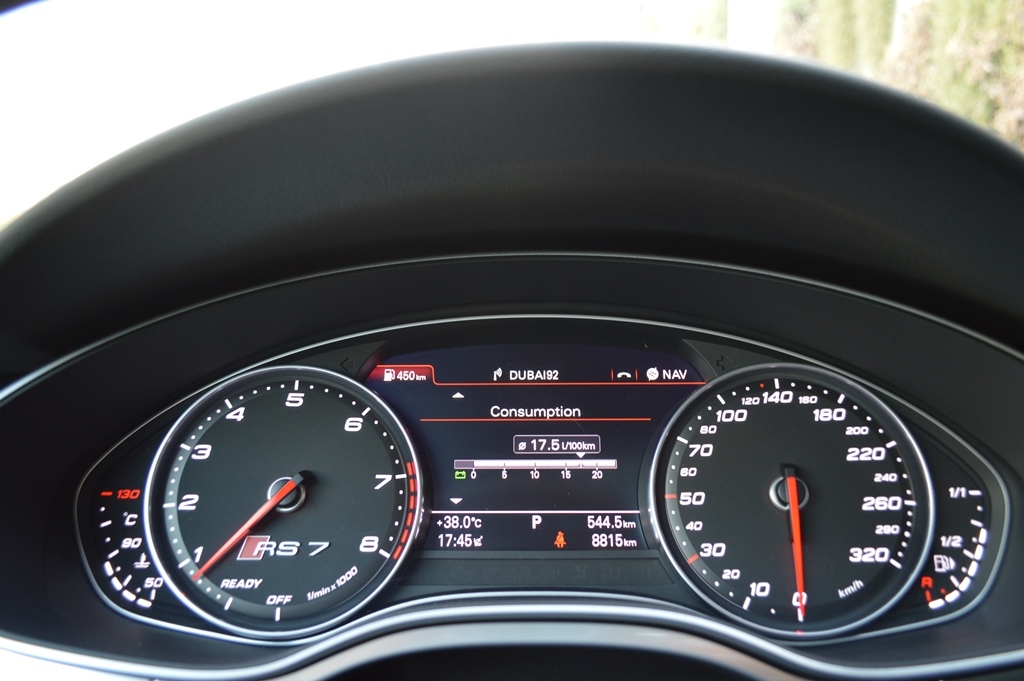 As far as the drive it’s the usual extremely well handling Audi tries to push through to all of their models and I can tell from the drive the car WILL NOT get sideways, there's simply too much grip with the huge Michelin super sports and the tremendously good Quattro system. The adaptive RS suspension provides several types of rides comfort from soft to race stiff. 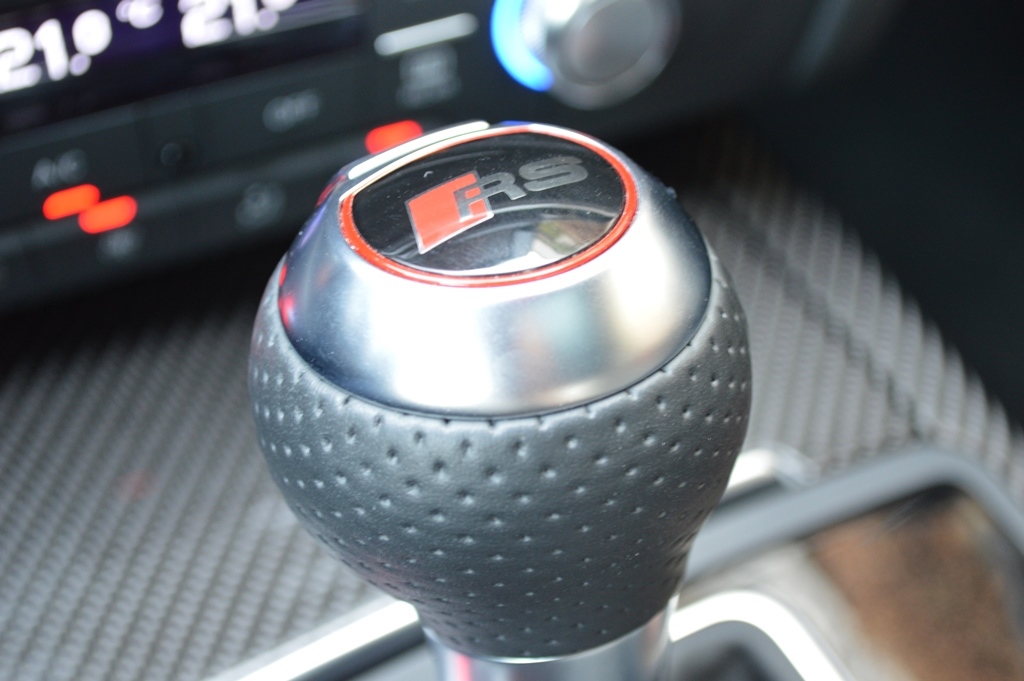 One of my favourite features, which I have to admit stayed on the entire duration of this test drive was the RS sports exhaust system. With the active valves open the RS7 at full throttle sounds like a low flying helicopter overhead and the downshifts induce a firework-like crackle and pop that is unmistakably an RS7 trademark. 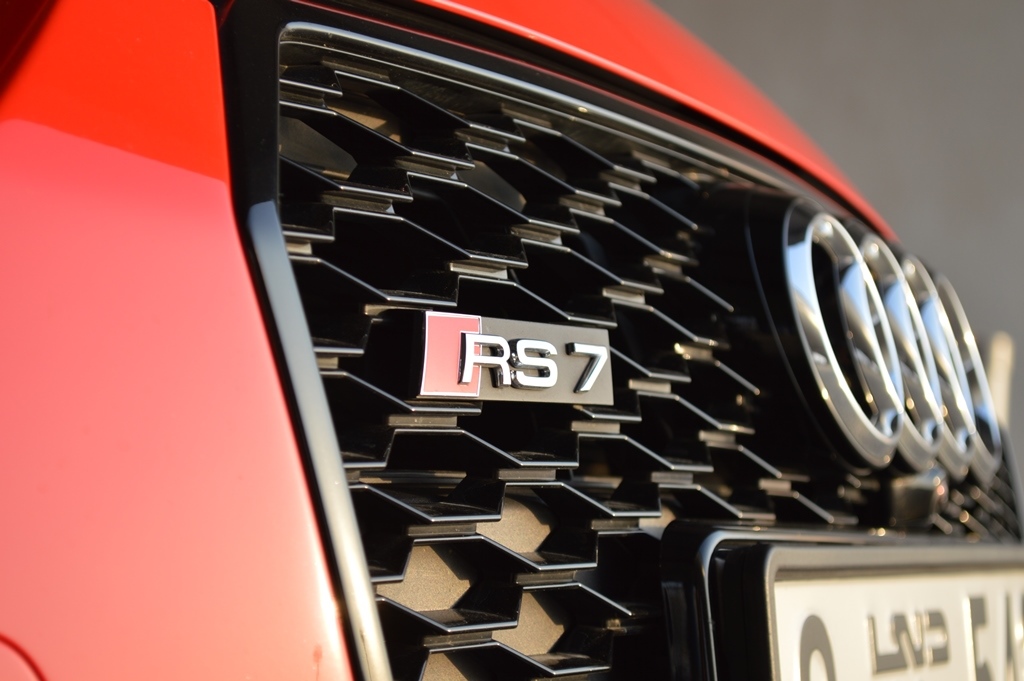 A masterpiece from Audi, really displaying what they are capable of nowadays. The RS7 Performance is incredibly fast and well planted on the road and as a grand tourer, I really don't think there is any competition. 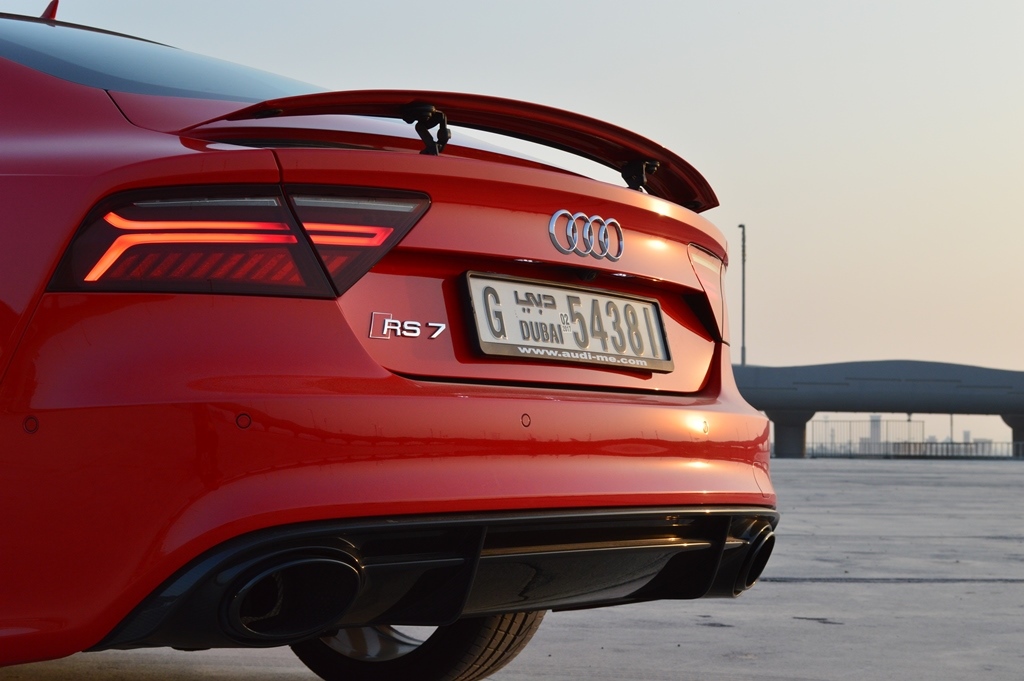 Performance for a saloon is astonishing, lighting fast

With the active dampening suspension it's a very comfortable drive 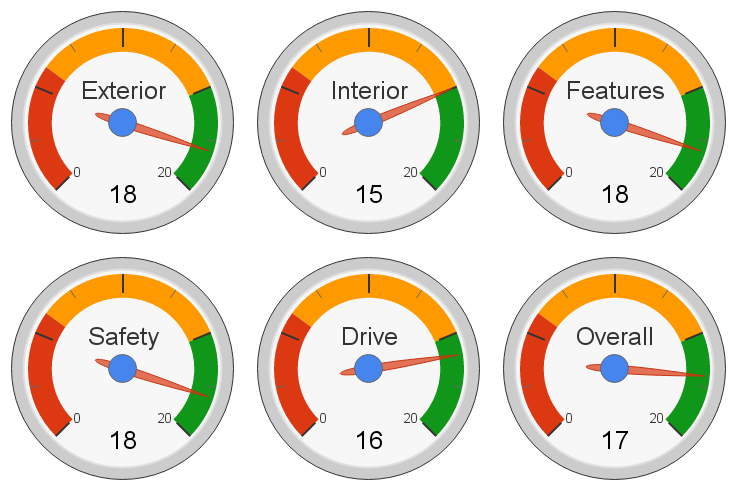