The Audi R8 has for long been positioned as the thinking man’s supercar. Driven by Tony Stark in the Ironman franchise, it has raced its way into many a heart, all while building its impeccable reputation. Standing alongside the Porsche 911 Turbo S and Jaguar F-Type R, the Audi R8 is a marvelously understated supercar that annihilates its rivals, especially in V10 Plus garb.

A clear case of evolution as opposed to revolution, the Audi R8 2016 barters the drooping contours of its predecessor for sharp, aggressive creases that lend it an intimidating stance. The fixed rear wing and gaping air inlets compliment the carbon fiber paneling and heighten the German supercar’s terrorizing aura. So much so, that even long-time residents of the fast lane hogging community, rapidly flee at the sight of the R8 in their rear-view mirror. 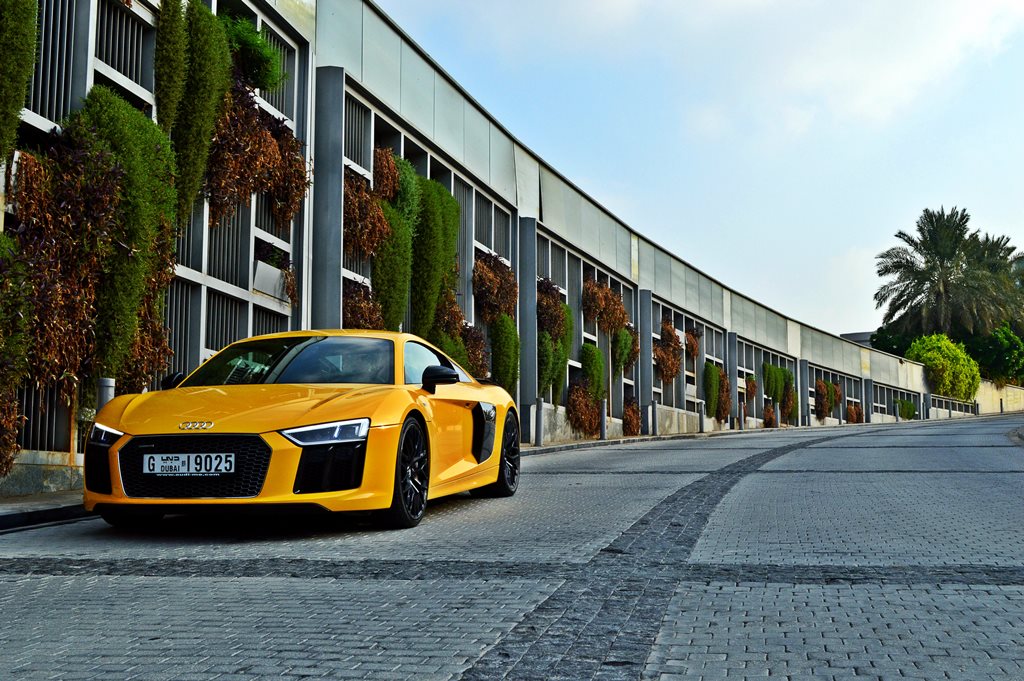 Cocooning its occupants, the phenomenally built cabin is bedecked with yellow stitching, carbon fiber inlays, quilted leather, and an abundance of Alcantara, to make it look as impeccable as it feels. Sat a few centimeters above the asphalt with aggressively bolstered sports seats and Ferrari-esque steering controls, the Audi R8 V10 Plus redefines conventions. 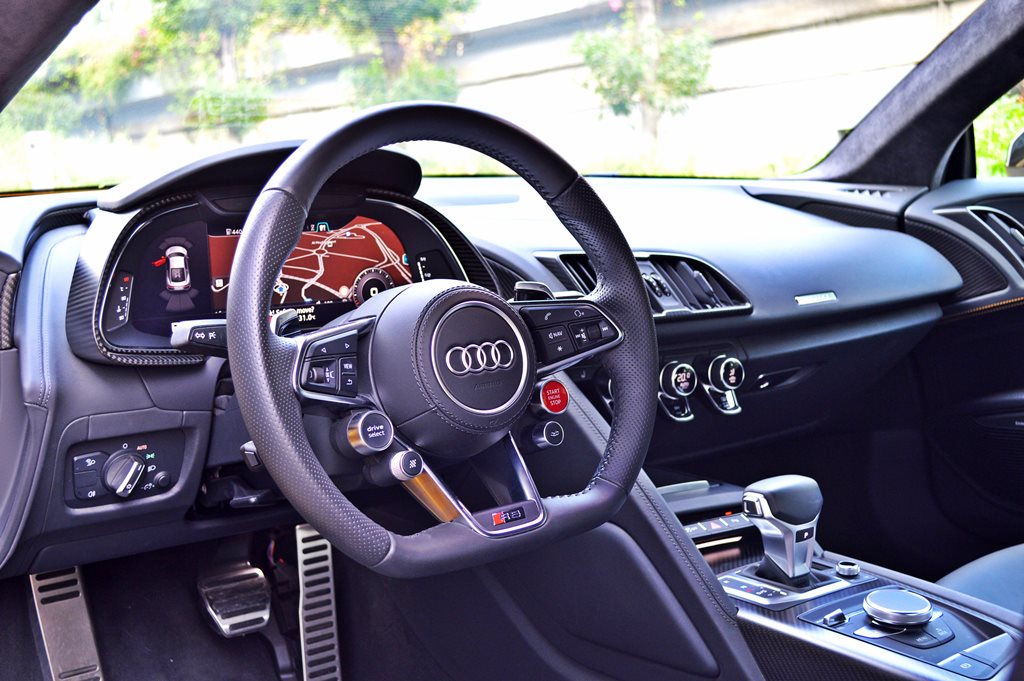 Following the mantra of creating more with less, the cabin of the R8 is neat and uncluttered, integrating several controls into just a few switches. With Audi’s fully customizable Virtual Cockpit welcoming a 12.3-inch TFT screen into the instrument cluster, not only is it unique, but also highly impressive.

Built to demolish race tracks and keep weight at a minimum, the boffins at Audi haven’t traded the R8’s capability for everyday usability. Equipped with Laser Beam headlamps that illuminate twice as much as conventional LED headlamps, Anti-Slip Regulation (ASR), an Electronic Differential Lock (EDL), and a thumping 550 Watts 13-speaker Bang & Olufsen Sound System, the R8 packs in the best of both worlds. 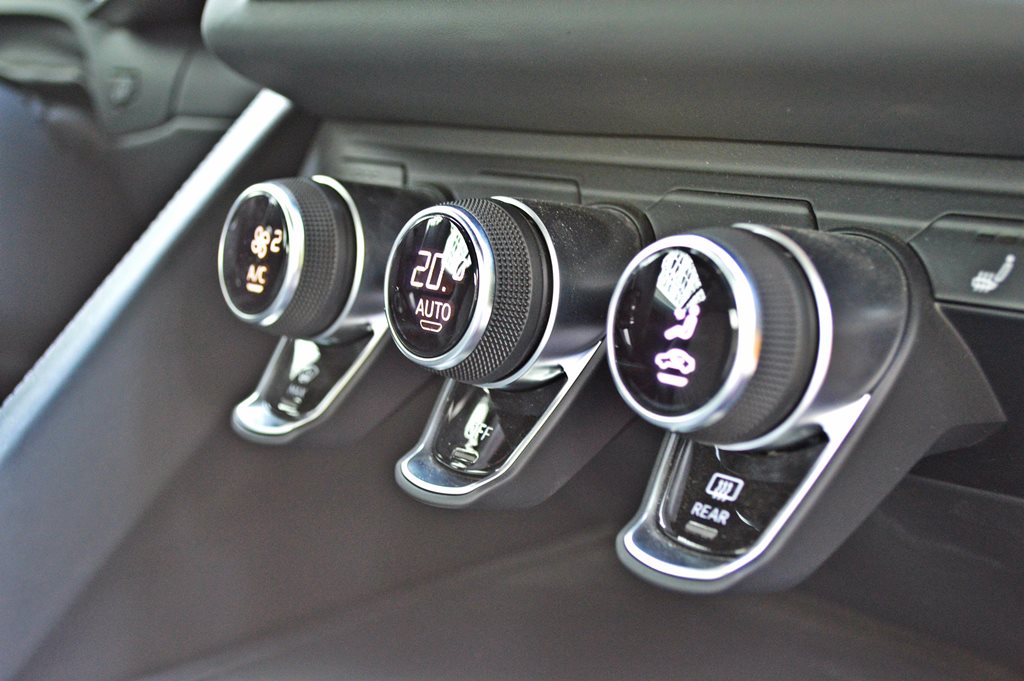 What seems to be missing, however, is a rather essential Blind Spot Monitoring system. With narrow side mirrors and limited outward visibility, carrying out a series of in-car acrobatic stunts to gain a better view of the outside world, is not only entertaining for passersby, but also inevitable when behind the wheel.

Tap the steering mounted engine starter switch and the guttural roar that follows is enough to set several supercars and their sporting pretentions straight. Open the exhaust flaps and the rumble of the 5.2-liter V10 almost echoes the galloping melody of the 600 horses residing beneath the clamshell hood. 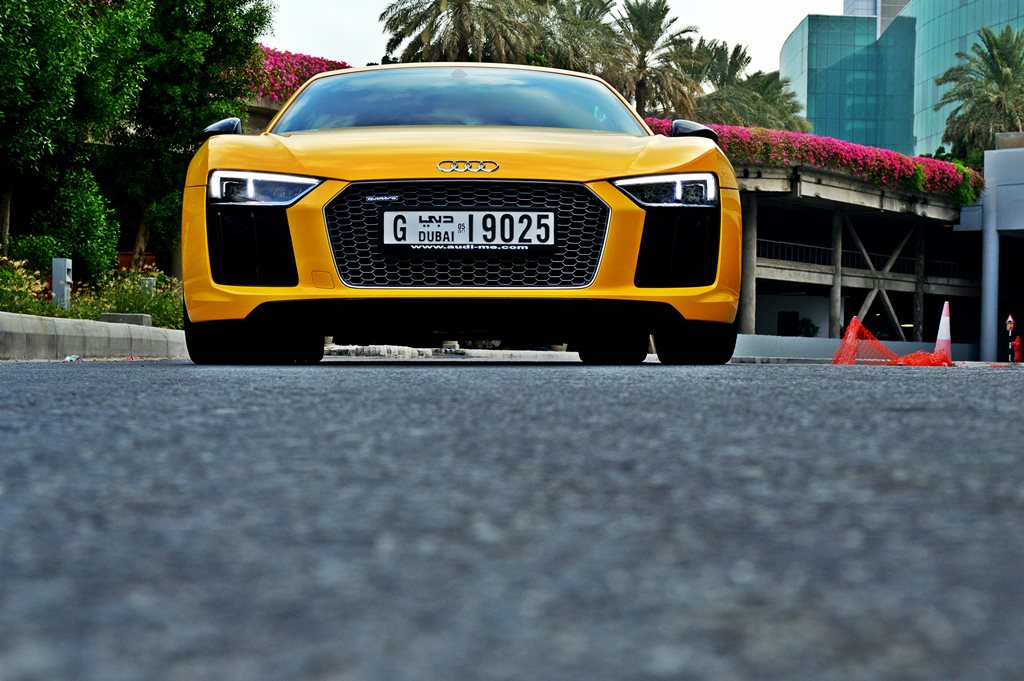 Head spinning acceleration, courtesy of 560 Nm of torque, sees the German coupe thrash a 0 – 100 km/h run in just 3.2 seconds – a figure that puts the Jaguar F-Type R’s 4.1 seconds to shame. Equipped with a Race Mode that alters the engine mapping and restricts the traction control system, the R8 is one that can be enjoyed by amateur drivers and aspiring Prost’s alike. 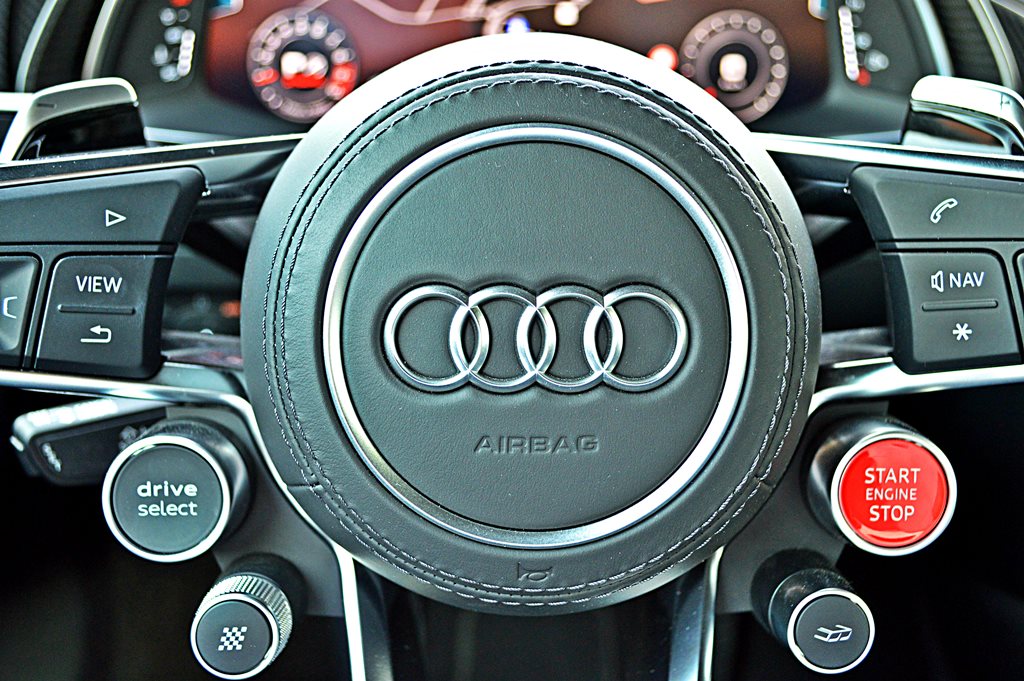 Mapped to an All-Wheel-Drive layout and coupled to a 7-speed dual-clutch transmission, the Audi R8 offers paramount levels of grip that permit a phenomenal amount of speed to be carried into turns. Six time 24 Hours of Le Mans winner Jacky Ickx, is quoted as describing the R8 as “the best handling road car today”, and quite frankly, there’s no reason to disagree. 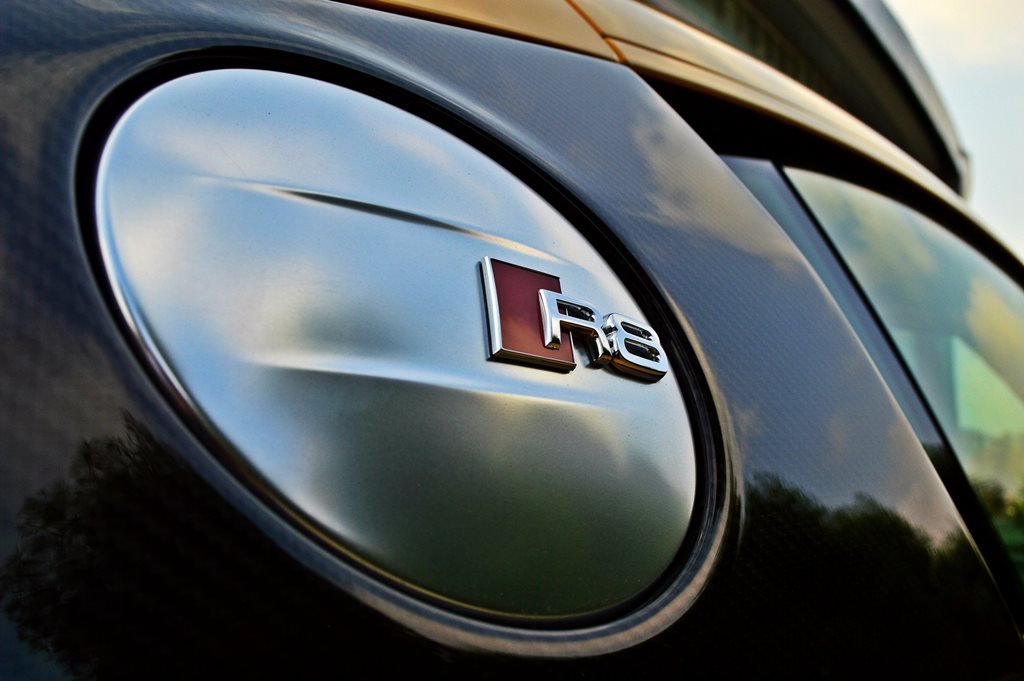 With a mechanical clunk from the transmission and a sonorous snort from the exhaust system following every shift, it’s a scintillatingly aural experience. One that could well deliver over 600 kilometers on a full tank of fuel, but you’d much rather focus on the smiles per gallon as opposed to the miles per gallon.

While the first-generation model of the Audi R8 came across as a little too clinical, lacking character and personality, it clearly isn’t the case with its successor. Far superior to its predecessor, this, the Audi R8 2016 is simply phenomenal and a sheer bargain at AED 687,000. 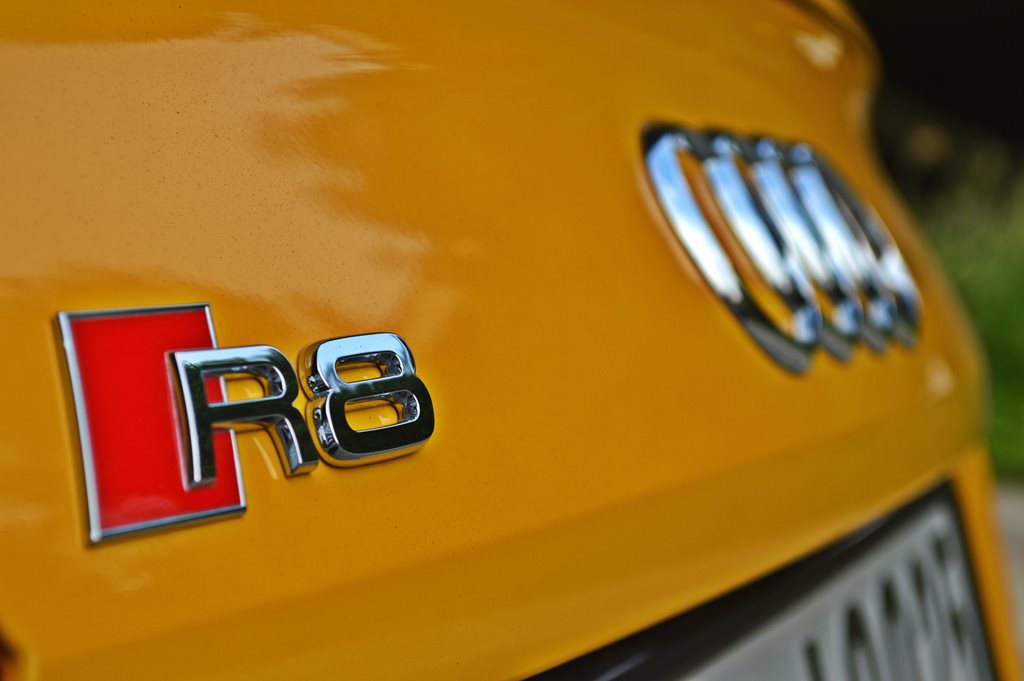 Long hold downshift and it pops into the right cog to move with urgency for impromptu drag races.

Pointless features include Seat heaters and a Comfort drive mode. 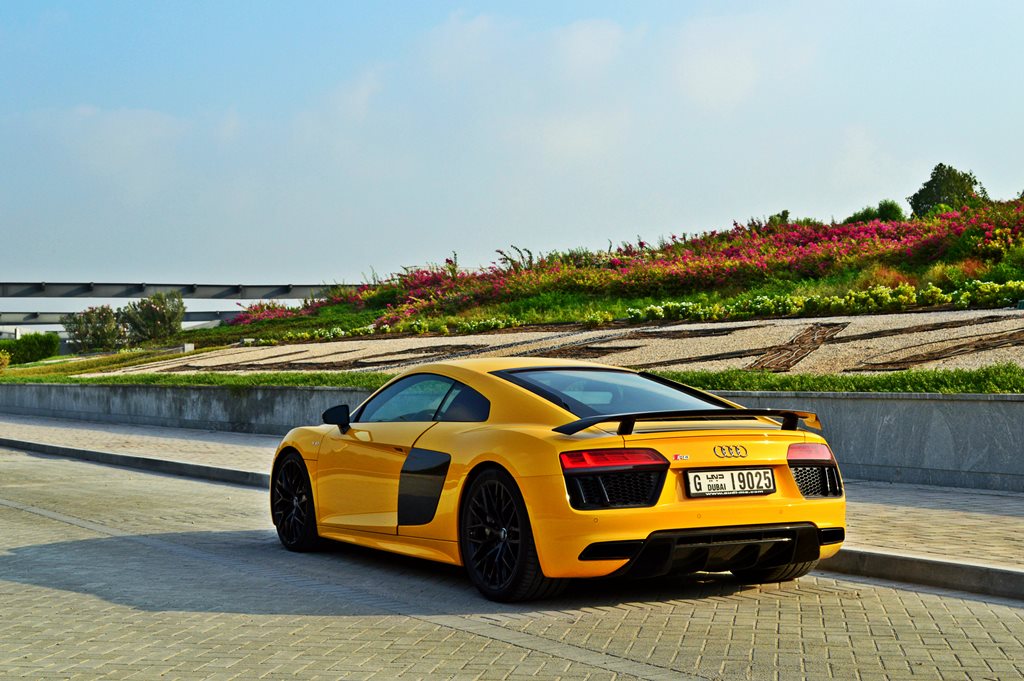