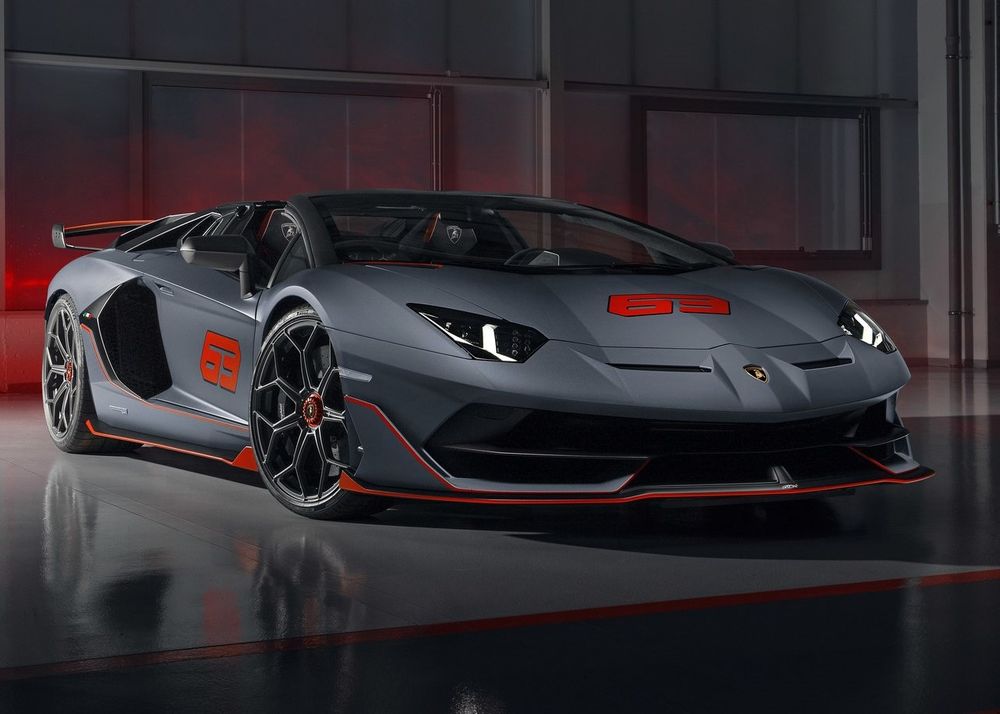 The original Lamborghini Aventador was the spiritual successor to the fantastic Murcielago, and had its epic unveil in 2011. Fast-forward a few years, Lamborghini launched the Aventador Roadster. In the coming years, this cycle of first launching the coupe variant and then following it up with a convertible or roadster variant would continue. One of the most spectacular and awe-inspiring avatars of the Aventador is the fire-spitting SVJ. SVJ stands for Super Veloce Jota, and as always, the coupe version was followed up by the effortlessly stylish Roadster.

Now, the Aventador SVJ Roadster is a limited edition variant of the already rare SVJ coupe -- only 800 examples are to be produced. However, the Sant'Agata-based automaker wasn’t happy with just that kind of exclusivity. So back in August of this year, the 2020 Lamborghini Aventador SVJ 63 Roadster was revealed in Monterey, California. The “63” suffix in the name pays homage to the founding year of the company itself, which was 1963. It’s also indicative of the fact that Lamborghini will only be making 63 units of the Aventador SVJ 63 Roadster.

For the most part, Lamborghinis have been styled to look as animated and shouty as possible -- it’s all about expressionism and drawing attention to oneself sans any bar attached. In this regards, the new Lamborghini Aventador SVJ 63 Roadster ticks all those boxes. Customers can opt for one of eight special paint schemes for their car, which have all been specifically tailor-made for the SVJ 63 Roadster, only. The supercar looks absolutely stunning in its matte finish with large ‘63’ and ‘SVJ’ graphics all over. Not to mention the pure carbon-fiber hard top for the roof - it just looks gorgeous.

Being an SVJ, this limited-series Aventador Roadster comes with flared nostrils up front and huge air intakes that find themselves right alongside the 63’s aggressive, segmented front splitter. The most notable design feature on the side is the exquisite but massive matte titanium alloy wheels with their contrasting center lug nuts. The aggressive aero treatment continues here with the inclusion of the stylish carbon-fiber side skirts and a few more air-intake and exit channels.

The rear of the Aventador SVJ 63 Roadster is quite similar to that of the standard SVJ Roadster, so there’s the enormous carbon-fiber wing, twin mid-mounted exhausts, and an intricate rear diffuser setup. The combination of the matte/glossy exterior with bright and contrasting splashes of paint really brings out the character of this big bull. 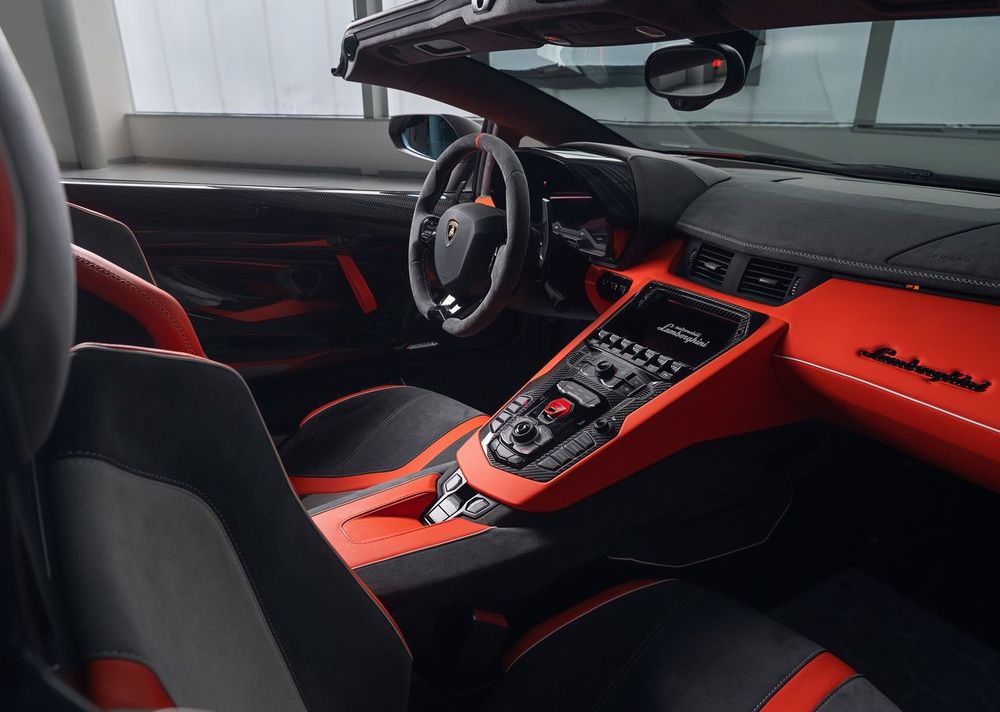 While the general design and layout of everything in the cabin remains as it is, there are some special touches to found in the interior of the new Aventador SVJ 63 Roadster. For starters, there’s a lot of Alcantara in here (some of it even has stitching on it) -- with the carbon-fiber seats featuring a brilliant Alcantara-leather combination. There there’s supple leather and naked carbon-fiber almost on every other remaining surface.

Apart from the Lamborghini branding on the seats and the dashboard, this limited edition Aventador SVJ 63 Roadster version sports the special ‘1 in 63’ plaque on the doors. There’s also a large ‘63’ logo on the rear panel right behind and in the middle of the front seats. Oh, and there are no traditional door handles in the Aventador SVJ 63 Roadster. Instead, if you want to you open the door on this car from the inside, you do so by pulling on a fabric strap. This is a pretty special place for sure.

The 2020 Lamborghini Aventador SVJ 63 Roadster is powered by the same 6.5-liter V12 that’s found in the other SVJ variants. It pushes out an incredible 770 horsepower and 720 Nm of shove - all going through Lamborghini’s 7-speed ISR transmission and driving all fours via a Haldex all-wheel drive system.

Performance is as adrenaline-gushing as you’d imagine. The Aventador SVJ 63 Roadster rockets from naught to 100 km/h in just 2.9 seconds, while terminal velocity is reached only when you summit 350 km/h. Of course, the V12’s visceral engine note is absolutely astonishing! 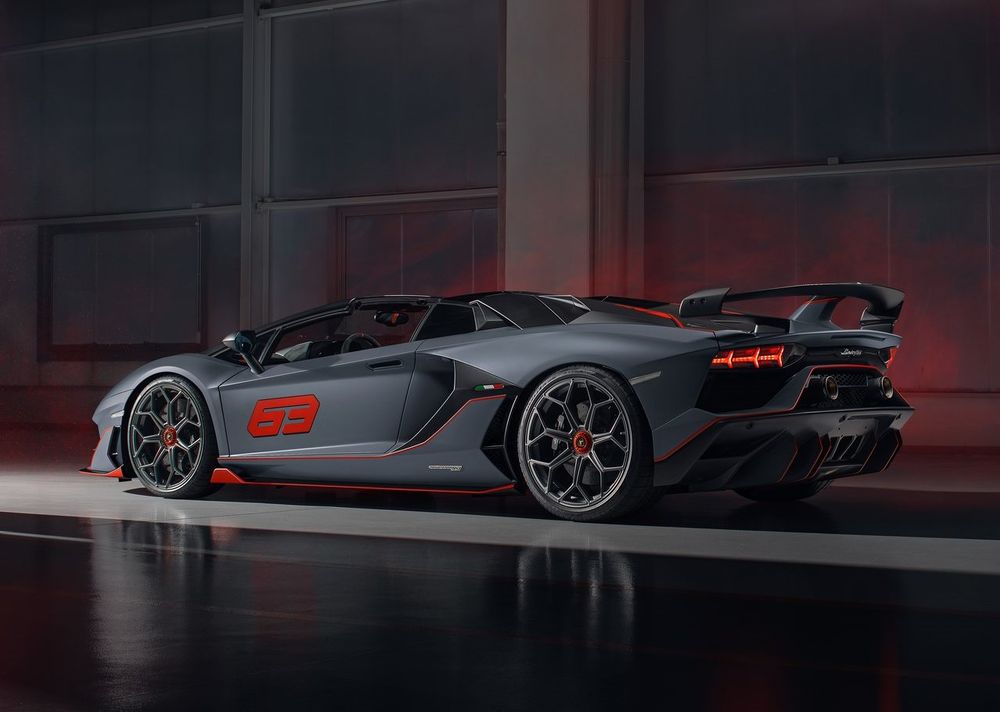 For those who were at Lambo’s doorsteps with cash-in-hand, their prized possessions will arrive in early 2020. However, those who are keen on acquiring one of these barely-tamed bulls straight away - know that all 63 units have already been spoken for.