Recently, we received an invitation from Ford Middle East to attend the American carmaker’s “City of Tomorrow” symposium in New Delhi, India. Right at the outset, it became clear that this wasn’t any ordinary event, but one which would try answering pertinent issues surrounding urbanization and transportation – two of the biggest challenges that face the cities of today and its populace.

We need smarter, more efficient forms of mobility to make the City of Tomorrow a possibility. Current systems are either outdated or aren’t being utilized as they should. Of course, the massive influx of cars that currently clog up our roads isn’t making the case for the future any better. According to Rajendra Rao, CEO of Ford Smart Mobility LLC, “The current models of transportation won’t work in the City of Tomorrow. Getting there will require a leap in our collective thinking, working with cities and partners who are agents of change.”

We all hope for a better tomorrow for ourselves and our future generations as well. Ford’s “City of Tomorrow” symposium gave us the opportunity to glance into the future as envisioned by the carmaker. Our time at the symposium made one thing very clear, and as mentioned by Mr. Rao, the present transportation model of today’s megacities won’t be compatible with the City of Tomorrow model. For our daily commute or for those weekend getaways, many of us continue to rely heavily on personal modes of transportation such as cars, for example. Fair enough. As motorheads ourselves, we agree that driving is one of the most enjoyable things, and owning and driving your own car isn’t going anywhere. That said, even in a motoring-friendly mega city like Dubai, with its impressive road network, relatively cheap fuel costs and well-paved roads, the sheer monotony of commuting to work and back, being stuck in traffic, wasting precious fuel and time, is something we all agree we can live without.

Of course, one can always use the current public transportation systems such as buses, cabs, and rail networks (or in Dubai’s case, the Metro system.) During peak rush hours, Dubai’s metro system is usually much faster at helping you reach your destination than driving your own car. Also, dedicated mass transportation solutions such as the Metro are also way more efficient at, well, transporting people from point A to point B. That said, the current transportation systems, no matter how good they might be, aren’t the ultimate mobility solution for the City of Tomorrow. 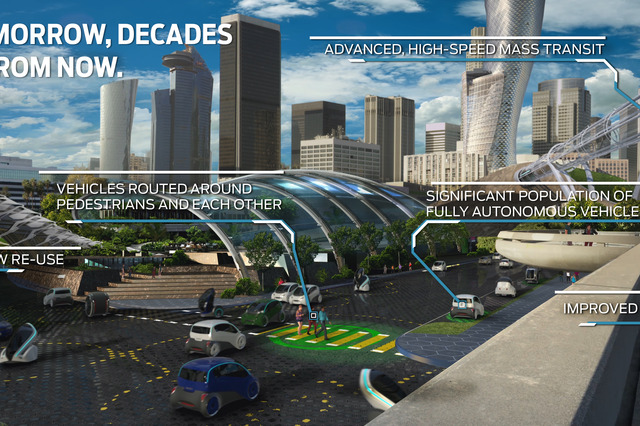 According to Ford, there can be no single solution for the complete transportation needs for the City of Tomorrow, and we agree. Depending on the city in question, the mobility solutions will have to be diverse and even more efficient than the pre-existent models. In Dubai for example, we believe the Metro network needs to be extended further, thus connecting more communities for it be a viable alternative in the future. Of course, there’s also the ambitious Hyperloop project, which would connect the over 140 km distance between Dubai and Abu Dhabi in just 12 minutes. Projects such as the Hyperloop would certainly make Dubai a contender for the City of Tomorrow.

Ford also mentions the use of smarter shuttle services and a wider adoption of car sharing. Both could well be autonomous in the coming years and all you would need to do is select your pick-up and drop off points. How convenient is that! It is estimated that Dubai loses over $800 million in revenue each year, thanks to traffic congestion, amongst others. In the City of Tomorrow, you could have an autonomous shuttle vehicle doing the driving for you, whilst you can focus on more important things such as doing work your laptop, enjoying a movie, or even catching up on some sleep. Cross-platform data sharing between the autonomous vehicles and the smart infrastructure around them will play a huge role in the City of Tomorrow.

Everything you need to know about the 2018 Honda Odyssey