Ever since its launch in 2009, the Q5 has been one of the best-selling cars for Audi; superseded only by its more prolific A4 stablemate. In fact, the Ingolstadt-based carmaker has sold 1.6 million Q5s since then, and 2016 witnessed an additional 280,000 units sold, worldwide. The model has been so successful that Audi has invested $1.3-billion into the construction of a brand-new, 400-acre production facility in Mexico for the new Q5. Now, the 2018 Audi Q5 and its sportier sibling – the SQ5, have been launched in the UAE and the rest of the Middle-East markets as well. 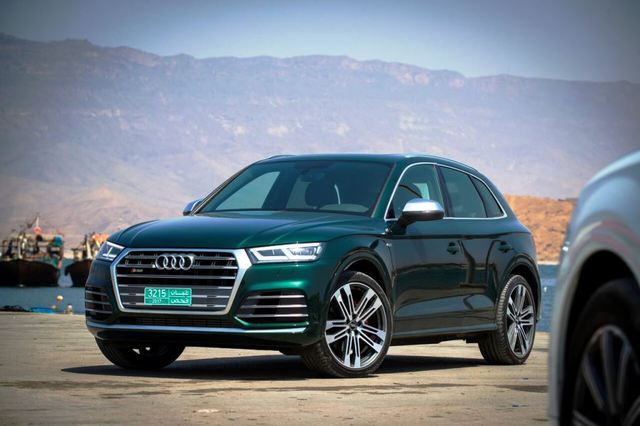 In its latest avatar, the biggest design changes on the 2018 Audi Q5 can be noticed on the front and the rear of this crossover. The new Q5 gets heavily-reworked bumpers, sleeker headlamps design, and pronounced character lines that streak across the top of the newly sculpted hood. The side profile features flared wheel arches and a distinct character line that runs across the svelte bodywork and connects at the taillamp housing in the back. The rear fascia remains vastly unchanged over the previous Q5, save for the beautiful new LED lights and a new bumper that now houses the integrated exhaust pipes. Overall, the new 2018 Audi Q5 not only looks more modern but also displays a more purposeful and elegant stance than ever before. 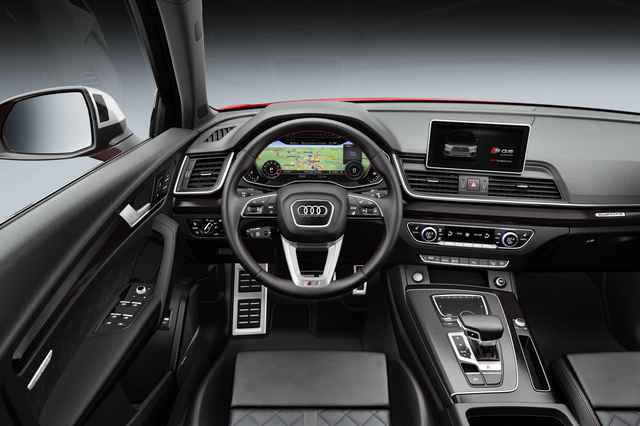 The cabin of the 2018 Audi Q5 feels decidedly more spacious for its occupants and their luggage, thanks to the slight increase in exterior dimensions and even cleverer internal packaging. Audi has made use of some of the finest materials, and the build quality and the overall fit and finish on the new Q5 are top-notch. Compared to the previous model, at 550 liters, the boot capacity on the new one has gone up by a whole 10 liters. The design of the dashboard and center stack is now more driver-centric and intuitively laid out. The quality of all the switchgear used are premium, and the general ergonomics are very sleek. Also, thanks to better sound insulation and the low drag aerodynamic exterior, the cabin now feels far quieter than on the previous Q5. 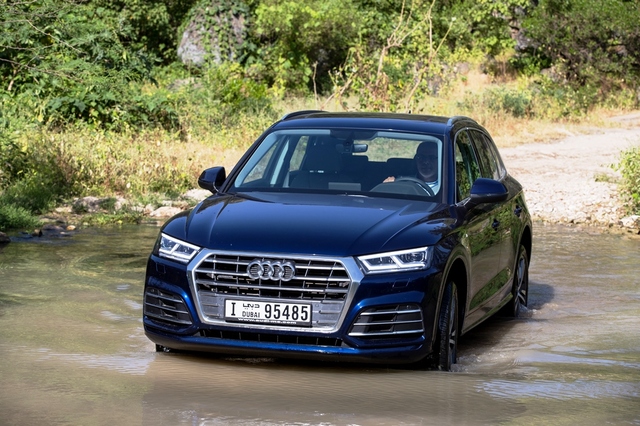 YallaMotor's Akram Assaf putting the 2018 Audi Q5 through its paces in the wilderness of Salalah, Oman.

The 2018 Audi Q5 and SQ5 come as standard with the latest iteration of Quattro all-wheel-drive, Airbags, ABS with EBD and BA, Hill-Hold Assist, ISOFIX anchor points, and all-around Parking Sensors. Tick the options list, and you can get Blind-Spot Monitoring, Park-Assist, Cross-Traffic Alert, Collision Avoidance System and Hill-Descent Control.

On the technology front, Audi does not disappoint, and the 2018 Q5 can be obtained with an array of gadgetry. These include the brilliant Audi Virtual Cockpit, an upgraded MMI system with a touchpad, a tablet-like 8.3-inch touchscreen infotainment system with navigation, Apple CarPlay and Android Auto support, plus a banging B&O audio system. There’s also a wireless charging pad for your smartphone. 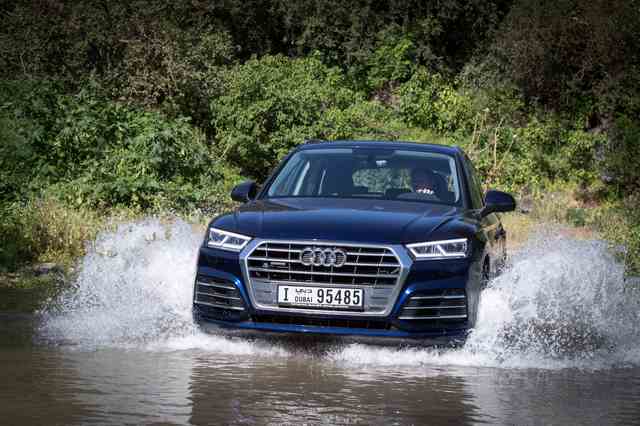 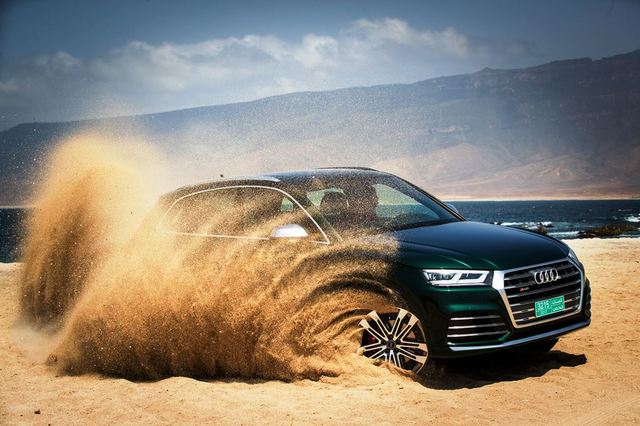 Thanks to clever engineering and extended use of lightweight aluminum and high-strength steel, the boffins at Audi have managed to scrape off 90 kg from the overall mass of the 2018 Q5. The standard Audi Q5 comes with a 2.0-liter turbocharged four-cylinder petrol engine that develops a healthy 252 HP and 370 Nm of torque. Power is transmitted through a 7-speed automatic gearbox and sent through the Quattro all-wheel-drive system to all four corners. However, unlike the previous generation Q5, this one gets an all-new Quattro Ultra all-wheel-drive system. Essentially, the Quattro AWD on the standard 2018 Q5 now works on an 'on-demand' philosophy. This means that when not in need, the rear axle can be decoupled, thus sending engine power only to the front wheels. However, if the system detects tire slip or loss of traction, the rear axle is called into action and the Quattro system then distributes power between all four wheels. The shift to this new Quattro Ultra system on the new Q5 results in increased fuel efficiency, better road handling, and reduces drivetrain friction as well.

On the performance-oriented SQ5, Audi has stuck with the standard Quattro setup, where the rear axle is always sent power from the engine up front. That said, Audi has tweaked the Quattro system on the SQ5 and for the most part, it is rear biased. It is smart (and enthusiastic) enough to send up to 85% of the torque from the engine straight to the rear wheels. To help out with this rear bias is Audi's new Sport Differential, which can manage the torque between each of the two rear wheels and if need be, send a lot of grunt to just one! 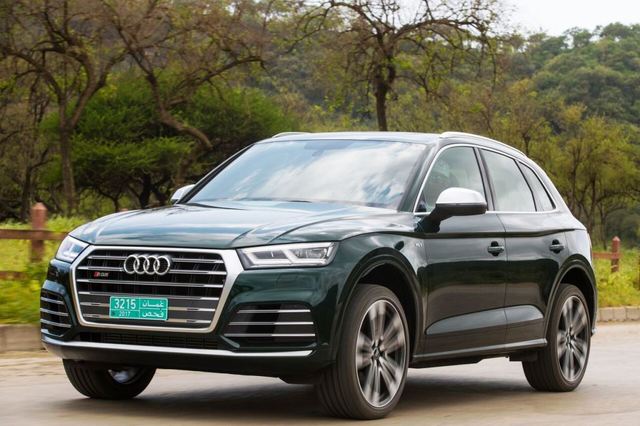 Speaking of grunt, the new SQ5's beating heart is a TFSI 3.0-liter V6 motor that churns out a meaty 354 HP and 500 Nm of twist. Transmission duties on the new Audi SQ5 are handled by a quick shifting 8-speed auto-box, whilst that on the standard Q5 are taken care of by a smooth yet efficient 7-speed dual-clutch system. The 2018 Audi Q5 will hit 100 km/h in a brisk 6.3 seconds, while the speedier SQ5 will smash through the ton-mark in just 5.4 seconds. Top speed for the Q5 and SQ5 are pegged at 237 km/h and a managed 250 km/h, respectively. 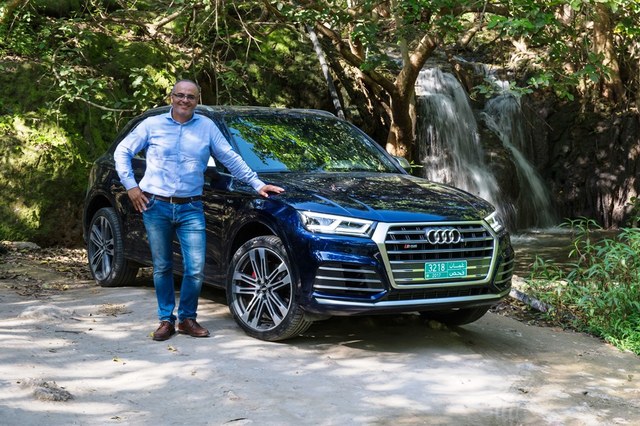 Akram with the hot and new 2018 Audi SQ5 in tropical Salalah, Oman. 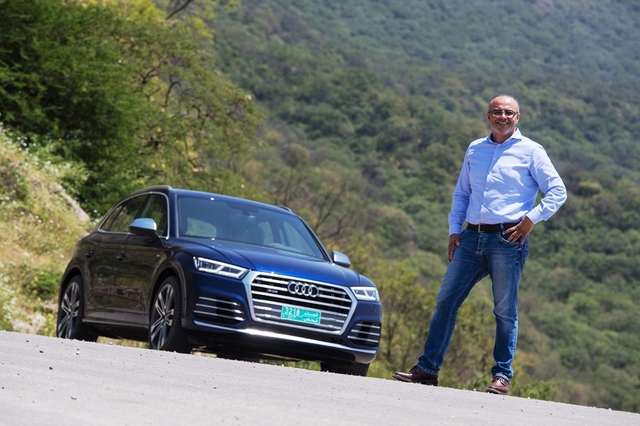 Splendid backdrop with the ravishing 2018 Audi SQ5 looking on as YallaMotor's Akram Assaf smiles for the camera.

Top 3 Grand Tourers of All Time

A Quick Look At The 2017 Hyundai Creta