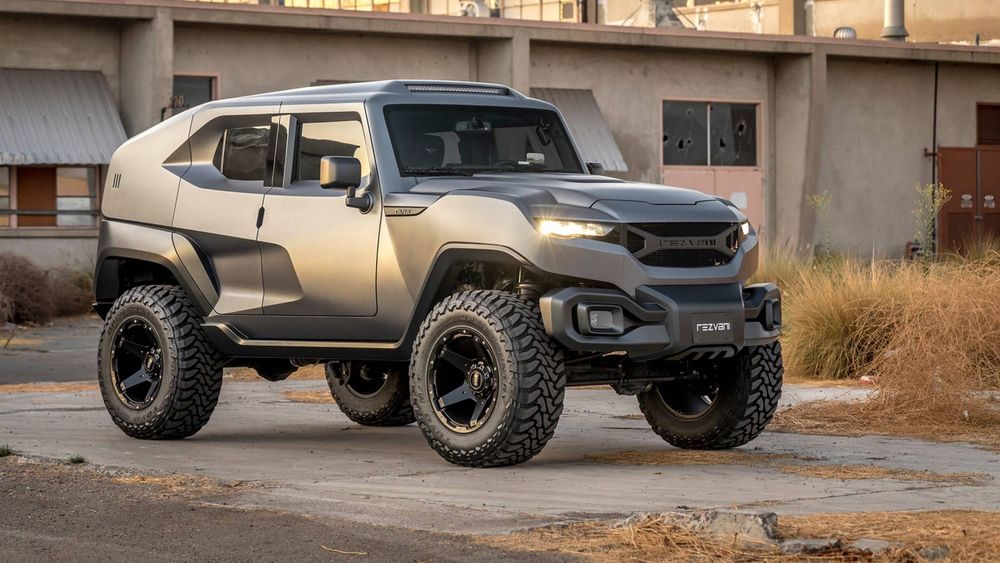 The Tank’s design is so heavily inspired from a military tank, that Rezvani simply calls it the ‘Tank’ and it would be the prefect nameplate for a car having dimensions of 4.987 meters, 2.1 meters and 2.1 meters in length, width and height, respectively. Not only that, the car weighs 1950 kg.

The Rezvani Tank is the most serious off-roader ever built, claim Rezvani. With traits such as an overwhelmingly high ground clearance, off-road tires, locking differential, etc. it is an SUV with ‘go anywhere’ capability.

What drives the behemoth is a 6.4 liter V8 producing a whopping 500 hp, all of which is harnessed to all four wheels. However, if those figures aren’t awe-inspiring, there is another powerplant that powers the mid-option ‘X’ and fully loaded ‘Military’ variants. Those models get a 707 hp 6.2 liter supercharged engine from Dodge.

There is also a selective all-wheel drive mode on offer that transfers the power selectively to those wheels which need it for traction and pulling the immense mass of the car.

Rezvani has been extremely thoughtful and meticulous while designing the car. Some cool features of the car include a couple of off-road packages: One is likely to be made available with a high ground clearance, FOX off-road suspension and a wide section tires providing transcending levels of grip over any terrain. The military trim not only is expected to go ballistic, but also comes equipped with such features, as are present in a Tank. It comes with an armor capable of stopping high caliber weapons and assault rifles. Its underside is also protected with a Kevlar. A smoke screen that loses trackers, electrified door handles and military grade run-flat tires are just some more protective touches provided to the Tank.

As expected, it requires a lot of effort to bring the brute in motion to a standstill. Hence, the Tank is expected to come equipped with 16” 8 piston brake calipers to provide unparalleled stopping power.

One feature imperative for any SUV that goes off the beaten path, is On demand 4X4 that can be activated for off road use and deactivated while cruising on the tarmac for higher efficiency. Also what comes as a surprise is a Thermal Lighting package which illuminates the road and objects with a bright color for enhanced vision.

It is unclear if the Tank would make it to the UAE anytime soon but if it does, it’s arguably getting the best habitat to play around and shatter everything that comes in its stride.