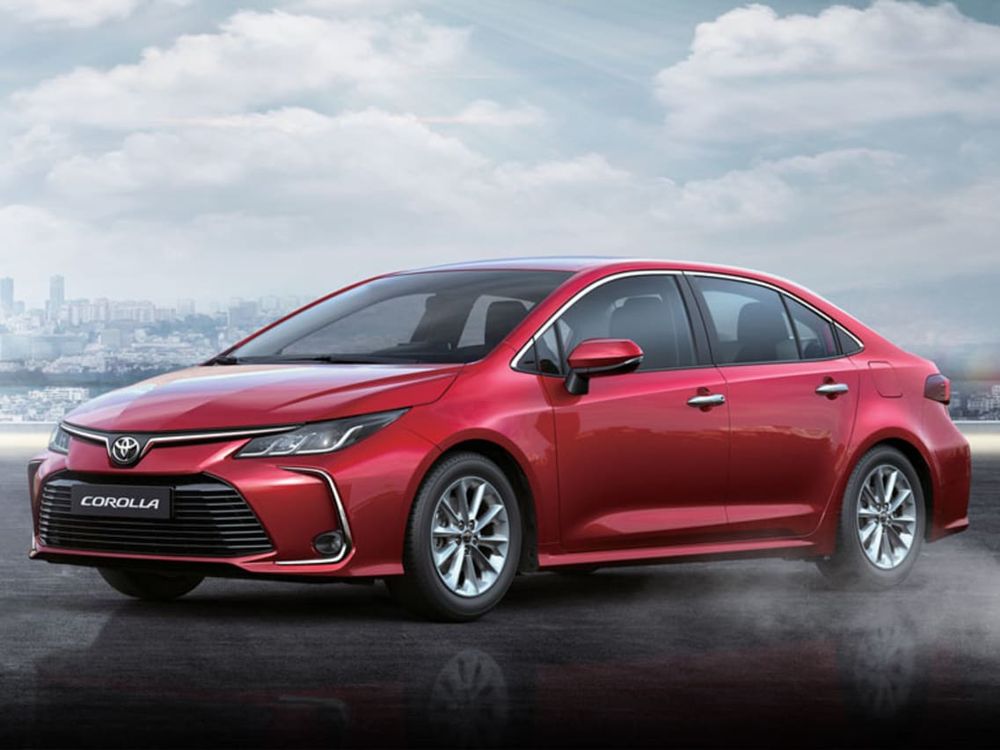 The first gen of the Corolla was rolled out way back in 1966. Since then, the Toyota Corolla has evolved from various body styles and powertrain options and it has always guaranteed its buyers a low cost of ownership and an excellent combination of performance and frugality like no other. Here, we bring to you some information on its latest iteration which betters its already popular and capable precursor.

The Corolla has always been a favorite of people as it always looked elegant and entirely different from the model it replaced and in this avatar, I have the same to report. The front flanks a humongous split grille with black inserts of plastic for the air vents on the bottom while the upper part witnesses a chrome slat giving it a more sophisticated appeal. This model however, retains the same set of headlamps as seen in its predecessor and the only contrast as compared to that is the incorporation of three ‘S’ shaped LED units providing it its characteristic appeal and is a welcome. To give it a sense of drama, the bumper houses in gregarious chrome inlays on the side and upon a close look, you will identify the puny fog lamp which does not hold in line with its otherwise handsome looks and might hold differentiated opinions.  The hybrid counterpart also gets some changes in the form of a blue Toyota logo and HYBRID SYNERGY DRIVE badging on the boot.

The side profile remains almost identical to the previous generation- neat, simple and uncluttered. To give it a Fabian look, there is a large single crease running across the doors which curves and integrates into the wheelbase.

The stubby boot on this car gives it a more menacing look which has a pair of thick headlamps which look much better than before and execute a sure sense of panache. The bulky overhangs though, might be obscene to one’s senses but that can be ignored in this otherwise gorgeous looking executive sedan. You will also find air intakes at the back following the recent ubiquitous bandwagon every manufacturer desires to follow. 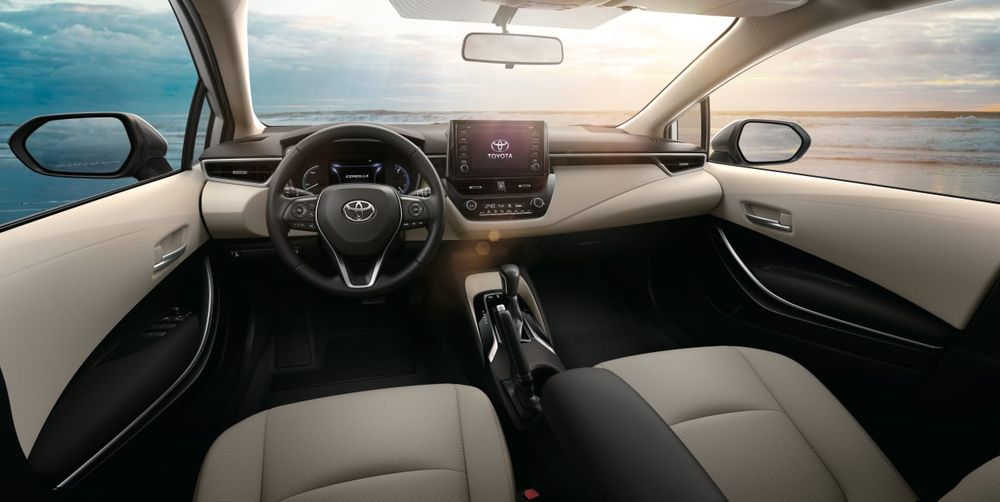 It is in this department where the Corolla can be said to have got an actual makeover. As opposed to its predecessor, Toyota has made large use of leather and soft touch plastics and in order to wipe out the wee bit criticism which the brand received post the launch of the earlier gen. This time around, Corolla has done away with all the hard plastics and makes up for an extremely airy cabin with plentiful use of beige wherever possible. The dashboard follows a sloping profile making it deceptively more spacious than it actually is. Added advantage of this is also the fact that it enhances visibility of the various functions lying on the center console. The steering is now leather wrapped which provides you some convenience features such as cruise control, volume controls, engage and disengage buttons for phone calls, etc. apart from some driver assistance features which are accessed via the 4.7’’ drive computer in the 1.6l version and 7’’ instrument cluster for the top spec GLi trim in the 2.0l and hybrid model.

However, the absence of some quintessential contemporary features is felt as the car misses out a sunroof and leather seats which all its formidable rivals such as the Hyundai Elantra and Skoda Octavia have on offer. This is followed by a set of rectangular air con vents controlled by a touch sensitive platform which is present to increase or decrease fan speed and inside temperature. This time around, thankfully the Corolla comes with dedicated A/c vents for the rear occupants offering them a pleasant experience every time they embark on a drive. The rear windows have been made taller and wider so that nobody feels claustrophobic inside and offers sufficient leg space and headroom for someone who is taller than a fathom too. Back seat space has always been a strength of the Corolla and this one doesn’t disappoint on that front.

The car also gets wireless charging ports, a push button start stop knob, 60:40 split rear folding bench, wireless charging, Bluetooth, AUX, USB compatibility, voice command and a slew of driver centric features such as Hill Start Assist, ABS with EBD, Vehicle Stability Control, front and curtain airbags and reverse parking sensors with camera to provide a more comfortable and safe driving experience. The car also has a commodious boot space on offer which is marginally better than the Hyundai Elantra. However, the inclusion of the hybrid battery might guzzle up a considerable amount of trunk capacity. The wheel rims options range from 15’’ steel wheels to 17’’ alloy wheels on the hybrid guise. Corolla measures 4630 mm in length, 1780 mm in width and 1435 mm in height. 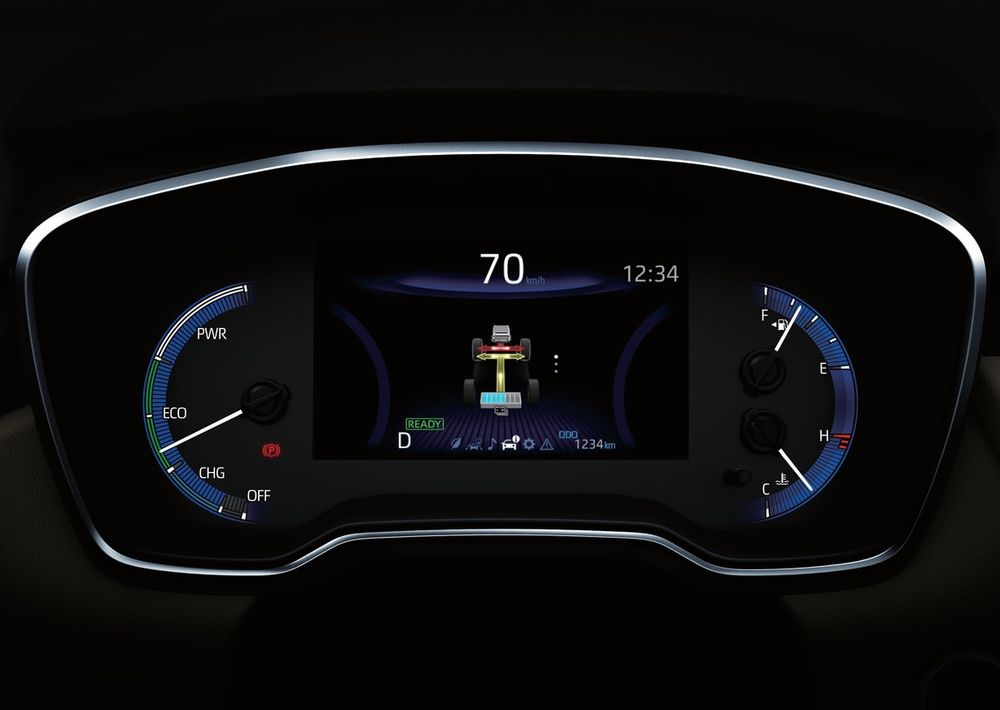 There are three engine options to choose from- the entry level model comes with a 1.6 liter inline 4 unit churning out a 121 hp and 157 Nm of torque mated to a CVT. The fuel economy is rated at an impressive 18.2 Km/L combined.

The second powertrain features a 2.0 liter 4 cylinder petrol motor producing an exceptional 168 hp and 204 Nm of torque. Certainly, this is the engine which would be an enthusiast’s choice as it offers more oomph than most its naturally aspirated rivals and also offers a claimed fuel efficiency of a surreal 19.8 Km/l.

However, if you are environment conscious and want to save the maximum on fuel, then it is this 1.8L hybrid motor giving a potent combined peak power output of 167.5 hp and a whopping 311 Nm of torque and is fuel economy is rated at 27.6 km/l outclassing all its rivals making it a seldom need for you to visit the fuel station. 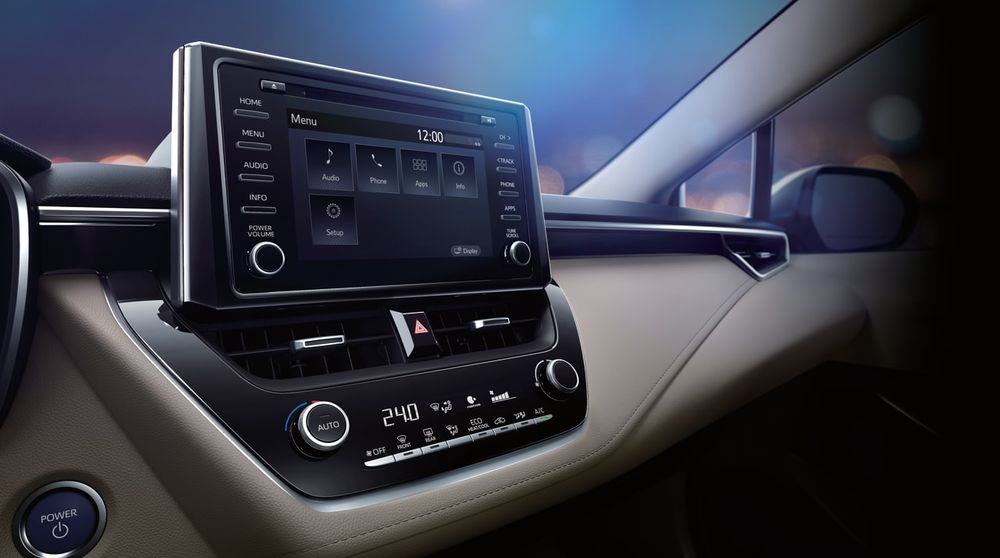 The 2020 Corolla has become more versatile than ever before as it offers an excellent blend of power, practicality and economy which it has always done best. The car also boasts of being reliable and commands an aggressive resale value which all its adversaries lack. Bringing with it the convenience of a hybrid motor and quenching the thirst for many by providing the much needed features and an upmarket cabin ambience at prices ranging from AED 71,900 going up to 83,900 for the amazingly capable hybrid model, the Corolla surely offers bang for buck and it has become a more enticing package than ever before. It has the capacity to give all its rivals a run for their money.