That was the first question that passed through my head the minute I clapped eyes on it. I know that Infiniti wants to categorize it as a premium mini SUV but have sneakily given it coupe-esque lines with the long hood and sloping roof-line. Does that make you want to go running into the showroom to buy this mini X6 today?

Well…not really, but lets try and figure out what this car is about, because it’s not all bad.

Beauty may lie in the eye of the beholder but the person that penned the EX37 was definitely short sighted. It’s not exactly appealing when viewed head on and is certainly not ground breaking from any other angle. There’s not much in terms of individualistic styling elements that differentiate this from the rest of Infiniti’s range. While trying to maintain compact proportions for this segment, the coupe-esque body style with the long hood means it doesn’t feel exactly small. That is, till you step inside. 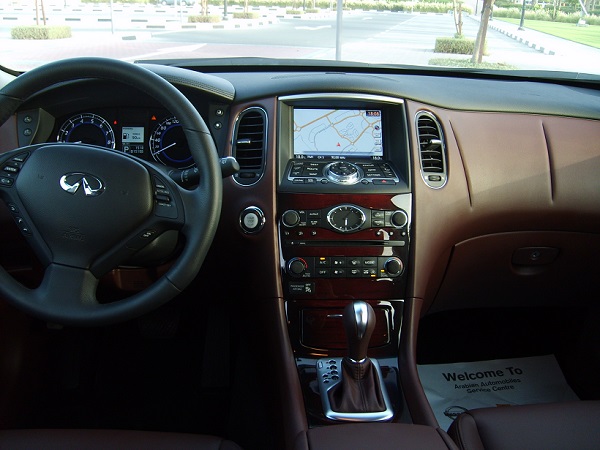 The first thing you notice upon opening the doors to the Infiniti is how flimsy that door feels. It could very well be made out of a thin sheet of tin. Not exactly a comforting feeling when you’ve bought a premium vehicle.

Step inside and the lack of space is shocking. Infiniti would’ve done better to shorten that hood and use every last inch that it can to give you more space inside. The feeling of claustrophobia is further heightened by the fact that there are barely any cubby holes to put any paraphernalia. A couple of cup-holders (which nicely transform into bottle holders at the flick of a button causing an increase in depth of space) is all you’ll get aside from a shallow centre console and tiny dash compartment (incidentally filled to the brim with an owner’s manual and service history booklet).

Infiniti does tend to tread on a bit of a middle ground when it comes to perceived quality and that’s how the interiors feel as well. None of it really feels cheap but it isn’t going to be mistaken for the interior of the Burj Al Arab anytime soon either. Our test car came covered in brown leather (with the dash-top and steering wheel wrapped in black leather) and while the colour may not be to everyone’s tastes, I quite liked the different hue chosen from the colour pallet.

There are options aplenty in our test model. It had all the usual bells and whistles of a top range model including a sun-roof, an excellent navigation system, a Bose sound system (that could put many sound systems in much more expensive cars to shame – the sound quality is just excellent), cruise control (though not radar guided to adjust distance), parking sensors all around and an ingenious system of a 360 degrees camera view.

The latter is an excellent feature and I can not imagine why more companies do not offer it. The car has 4 camera mounted around the car – one each on the nose and at the rear and one each under the side mirrors. This allows you to not only see individual views all around the car but there is also a ‘Bird’s eye view’ option which shows an image of everything around your car. This is excellent when manoeuvring through tight spots and is something you tend to use regularly enough and would miss terribly if not available in a car thereafter.

Back again to the question of what this car is. It's not exactly an SUV. I’m sure I’ve seen sedans with more wheel travel and higher suspension than the EX37.

Typical buyers aren’t going to be looking at taking the EX dune bashing or crawling through a wadi any time soon. They revel in the higher seating position that allows them a better view forward and the security of four wheel drive should the road they come across be a little less than well paved. And yet, the Infiniti is so low that it doesn’t really offer you any better a view than a saloon. Raising the height of the seat helps but not anymore than in a typical sedan really. However, the permanent four wheel drive and low stance allow it to handle like a saloon. And that is a good thing. The ride is surprisingly good, soaking up the bumps in the road nicely while not letting the car get too wallow. I was genuinely impressed by this.

The brakes are strong and bring the car to a dead halt in an assured manner. However, during day to day driving, the pedal weighting feels too light and you tend to hit the brakes harder than you need to. Its something you get used to over time, but the car definitely lacks the brake feel that would allow you to modulate your braking comfortably.

The next bit though was unexpected. With a compact saloon, you also expect a compact engine. A nice four cylinder maybe – throw in a turbo for good measure. Oh no…not Infiniti. Their range doesn’t have any small engines (unless they dig into Nissan’s parts bin) and so what you get here, as the name would suggest, is a 326bhp 3.7 litre V6. That’s right; you have the engine from the 370Z sports car in your miniature cross-over.

Infiniti – what were you thinking?!

The engine in itself is great. Extremely powerful but a bit overkill for the size and nature of this car. The car gets off the line like a cat that’s had its tail stepped on. Over taking traffic becomes a doddle and the engine actually has quite a nice howl to it. However, this is not what you’d expect or want from a cross-over. The transmission lets it all down by being quite jerky and each gear is not spaced well at all. The transmission refuses to drop a gear unless you have your foot flat on the floor and then it will drop two, maybe three gears all at once and go banzai charge on you. What this means is that you can cruise relatively quietly on a highway (there is a bit of wind noise at highway speed but its generally quite well suppressed) but will struggle to see an average better than 12l/100kms. In a compact cross-over, that sort of fuel consumption just isn’t acceptable.

The Infiniti EX37 is that misfit in your school classroom. He’s polite, but not very polished. He’s got brute force but lacks finesse. And he comes from a rich family. A very rich family.  I was hoping to end this review by saying that the Infiniti has its foibles but is a decent car in its own right.

However, I could not make a convincing case of that statement when the starting price of this car is AED 168k. That is a ridiculous sum of money for a compact cross-over. Even though the EX37 goes up against the likes of the BMW X1 3.5 and is still probably cheaper than the competition, it cannot justify that price tag, which is why I feel it has hammered in a final nail in its own coffin.